No Video
VoxCommando - VoxCommando is a robust application that includes advanced speech recognition technologies, allowing you to use voice commands in order to control your computer.

The program is based on two speech recognition engines – Microsoft Speech Platform, and Microsoft Speech API. What’s even more important is the level of integration provided by VoxCommando. It enables users to control playback on popular media applications like iTunes, Windows Media Center, MediaMonkey, Kodi and others.

There’s a variety of settings that let you fine tune VoxCommando’s functionality. For easy access, commands are sorted in groups and a search function lets you quickly find specific items. Advanced users can further expand the app’s functionality through the built-in macro editor and support for Python plugins.

The application includes three operation modes: on (green UI), off (red UI) and standby (yellow UI). While on and off modes are straightforward, in standby mode the program does listen to microphone input, but commands are executed only if they include a special prefix – this way you can avoid accidental commands.

A straightforward application that can help you safely install Cydia on your iOS device
5 / 1,084

Have Microsoft Anna read your work back to you with this handy and reliable text to speech software application
4 / 3,092 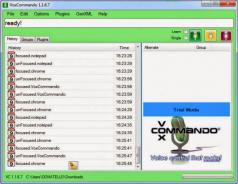