Voxengo r8brain is a powerful converter that will convert a continuous sound signal into a discrete-time signal, and the most common example is the conversion of a sound wave into a sequence of samples, which means the higher the sample rate, the higher the sound quality of audio production.

The sampling frequency will be used to measure how many samples per second are captured from a continuous sound, and the process will usually be expressed in kilohertz, which means that if you see a sampling rate of 48khz, it’s the analog signal that has been sampled 48.000 times per second.

Voxengo r8brain is a great converter that is mainly used for unprocessed audio files that are end results of the production process.

Great application for removing the DRM protection from AZW files.
3 / 700 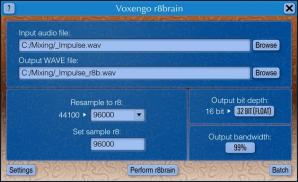