WSUS Offline Update lets you securely update your Windows operating system as well as Microsoft Office installed applications. It creates a package stored on your local hard drive, containing the latest security updates and patches which can be used to update the operating system without an Internet connection.

When older Windows versions are discontinued by Microsoft, WSUS Offline Update will remove them from the list of compatible editions as well.

Before downloading the updates, the program lets you select the OS, the architecture type (32 or 64-bit), the language (if available). You can set the app to include specific service packs, the latest version of Microsoft Security Essentials, the .NET Framework, C++ Runtime libraries and Windows Devender virus definitions among the packages that should be downloaded.

After the download process completes, WSUS Offline Update will create an installation script that you can deploy on any computer. However, you can also configure the program to create an ISO files with all downloaded files, or simply copy the updates to the location of your choice.

Identify and obtain the latest drivers for your hardware, while also getting a clear overview of your PC's hardware, installed software or drivers
12 / 1,047

Keeps your system clean and running at top performance
6 / 1,253

Delete the configuration of Windows Installer on failed installs
153 / 131,835 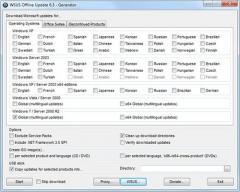 Driver Talent 8.0.1.8 Complete driver management solution designed to update old drivers, fix driver issues and create driver backups
Latest Articles
Best tips to extend and save your battery life on Android
Best free sports streaming websites to try in 2021
How to save YouTube videos to your iPhone’s camera roll
How to connect your phone to an Xbox
How To Enable 2FA for Gmail
720p, 1080p, 1440p, 4k and 8k explained
How to watch TV shows online for free (full episodes)
Best free music sites to download songs in 2021