No Video
The Frozen Throne expansion opens a new chapter for players in the epic Warcraft saga. Months after the battle of Mount Hyjal, new threats appear for the war-torn world of Azeroth.
Ner’zhul, the evil Lich King is imprisoned inside the Icecrown glacier but he is still searching for a way to escape although he lacks physical form.

The Night elf renegade, Ilidan and the traitorous Death Knight, Arthas, come across the glacier and realize it holds great powers. Players must explore unknown lands and fight new enemies to figure out the plans of these powerful evil beings and save Azeroth from being doomed to darkness.

The Warcraft III patch has been released with several game fixes and updates.

- Expanded supported window modes in Options
- Integrated Direct3D 11 graphics API
- Added 64 bit support for Windows
- Sounds are disabled when the client is not active in -nativefullscr
- See the World Editor section for more details on many additions and improvements including beta support for Lua
- Join the fray over in the Competitive section for balance and map pool changes
-Added support for many popular community created functions
- Added Custom User Interface functions to allow map makers to add, remove, and adjust UI frames 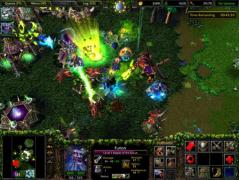