The vanilla remake of World of Warcraft

World of Warcraft Classic is the resurrection of WoW Vanilla, as players know it, remade by its original creators, Blizzard Entertainment. Classic is the first version of the most popular MMORPG World of Warcraft, which had a lot of updates and expansions over the years, basically transforming it into a slightly different game.

Classic WoW comes with the same game mechanics as Vanilla did, reintroducing the popular skill tree, no LFG system, transmog and other enhancements. This version of the game was long requested by the community and finally, Blizzard promised and delivered the vanilla experience.

World of Warcraft lets you play one of the 9 different races in a fantasy world called Azeroth. Players have to choose one of the two factions, Alliance or Horde, to prove their dominance in the world and at the same time, save it from external dangers. The popular MMORPG comes with a complex crafting system which lets the player choose 2 professions from a total of 9, an auction house, a PVP system, dungeons, and raids.

The immersive fantasy world comes split into 2 continents, allowing players to explore vast zones full of adventure and danger. You can grow in power from level 1, the beginning level, to level 60, which is the maximum level for Classic Wow.

As a conclusion, players have expected this version for a long long time and finally, Blizzard delivered on the promise and World of Warcraft Classic gets an official release and support. The game is available to play beginning August 27, 2019.

Great application for organizing the game library from various platforms.
6 / 770

Reliable application that will allow gamers to manage their EA games and looks for deals and other promotions.
7 / 781

Great app for gamers that have large game libraries that extend across multiple digital distribution platforms.
7 / 851 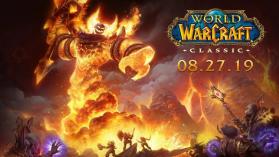