A simple and efficient piece of software that lets you burn data CDs and DVDs, XCDs, audio CDs, DVD-Video and (S)VCDs

cdrtfe is a functional application that allows you to burn various types of discs, such as data CDs and DVDs, DVD-Video, audio CDs, (S)VCDs, and XCDs.

You can use the tool to burn audio CDs with MP3 and Wave tracks, and even rip audio files from CDs. IT is also possible to create ISO files and bootable discs, and even burn video DVDs containing AUDIO_TS and VIDEO_TS folders.

Furthermore, cdrtfe offers the possibility to erase rewritable discs and loading files into the app can be done via its straightforward file explorer, or using drag and drop. 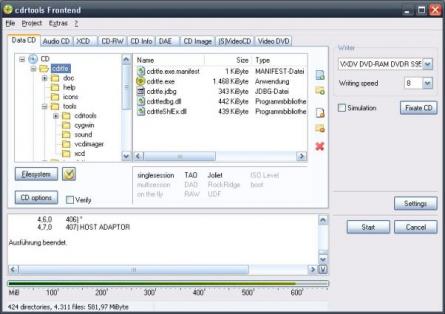 WinISO 6.4.1.6137 Converts BIN to ISO and more!
Latest Articles
How to See FPS in Windows 10 Games Using Your PC’s Built-in FPS Counter
How to Save and Download Workouts on Apple Fitness+
3 Quick Ways to View and Edit Apple Notes on iPhone using Windows PC
How to Record a WhatsApp Call on Android and IOS
How to Blur Pictures Using PowerPoint
How to Send SMS Messages Using Windows 10
How to Use Google Lens for Solving Math Problems
How to Free Up RAM on your Windows PC