deltasql is a feature-rich application designed to allow database developers to monitor the changes made by team members. It can be used as a version control tool to maintain the schema updated, which reduces the possibility of errors caused by schema inconsistency.

The application bundles a number of PHP scripts that need to be run on an Apache server that’s connected to a database which is used to gather the scripts that modify the data model and the method used to handle the branches. Also, the databases are synced with the source code as the developers are writing it.

The SQL scripts have to be numbered, and users need to create a database instance table where the number of the script that was run last will be stored.

deltasql offers a form where you can enter information from the synchronization table that will automatically update and compute the data model chain, delivering you the results. The program supports various types of databases such as MySQL, SQL Server, Oracle and PostgreSQL as well as other SQL-like databases.

With this application, you can also update both production and development schemas, but also convert them from one to the other. Users can import a dumped schema into another database and upgrade it, as long as the synchronization table is included in the duplicate schema.

Create custom databases, as well as manage them along with projects, contacts and inventory data
22 / 2,680

Useful tool for handling all kinds of different databases
14 / 5,408

A reliable application which allows users to easily maintain their databases
28 / 3,655 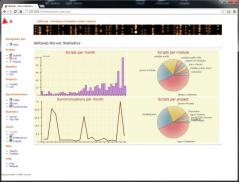 XAMPP 7.3.1 Easy to use Apache instalation for your PC
Latest Articles
5 Best Zoom Alternatives for Mobile (Android and iOS)
Best Mobile Apps to Learn Photography
How to Clean Up Storage Using Windows 10‘s Storage Sense
How to Transfer Games and Saved Data From PS4 to PS5
3 Quick Ways to View and Edit Apple Notes on iPhone using Windows PC
How to Send Disappearing Messages on Signal App
How to Use Apple Music on a Windows PC
How to Play Board Games with Friends via Zoom