An audio player that also bundles a recorder and a converter

fmedia is a portable audio player which features a converter as well as an audio recorder. The software's main advantage is that its memory footprint is very low which means it consumes very few resources from your computer.

The application has a pretty simplistic interface, some will call it rather rudimentary, but it boasts a powerful engine and a bunch of features that are not to be ignored. fmedia can manage many playlists at the same time, by opening them all in individual tabs. However, while this feature is pretty nice to have, the tabs cannot be renamed at all. Hopefully, this is a feature that can be easily added in future updates.

fmedia supports all the popular audio formats such as MP3, FLAC, WAV, MP4, M4A etc and can be used to open URLs for playback. With that said, probably the best features of this program are its recording and conversion capabilities. fmedia can convert any given audio with the possibility of modifying the file's bitrate, compression level, gain, sample rate and so forth. Also, the program has a built-in audio recorder who's able to record audio files using the system's input and save it to FLAC by applying different settings such as bitrate, codec or gain level.

If you're looking for a simnple and compact audio player with powerful recording and conversion features, you can try out fmedia, chances are you won't be disappointed.

A great media playerthat lets you save Youtube clips and listen to Online radio stations
27 / 2,204

A cross-platform music player with a built-in equalizer, channel volume control and other useful features
29 / 3,495 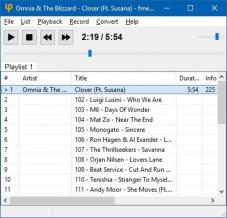 GOM Player 2.3.79 Build 5344 Play your media files without any codecs
Latest Articles
How to connect a console game controller to a PC (Windows and Mac)
How to Effectively Free Up Storage Space for Android Phones
How to block people from adding you to WhatsApp Groups on iPhone and Android
What is the best archiver for Windows?
How can you change your Twitch username
How to use Google translate offline on PC
The Best Computer Temperature Monitor Apps
Best sites to download free music