Reliable virtual model of an iPad to allow users to test and get the hang of how the iOS device feels.

The purpose of a great application, iPadian, is to transform the user’s Windows computer into a device that supports running applications that were specifically created for iOS, and it offers them an iPad simulator that helps them get accustomed to how an iOS device feels.

The program was designed to only run in full-screen mode with the possibility to quickly access the desktop using the dedicated button on the lower right side of the screen, and it comes with a set of predefined apps that have shortcuts already on the virtual desktop, while the custom App Store brings together all the compatible utilities in a single place.

Users will be able to find many more apps that are included in the package, like the Facebook app, YouTube viewer, Gmail, a clock, calculator and task reminder, an audio mixing tool and a music player, a photo editor, and many more.

iPadian is a very reliable virtual model of an iPad that will offer users the possibility to experiment with the Graphical User Interface to get a feel of how the iOS device feels, and to test its capabilities.

View a certain application window or your desktop on another monitor
8 / 2,105

A small utility that shows an electronic clock on your desktop
33 / 3,702 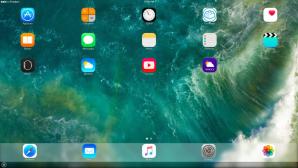