Handy application that allows users to quickly capture, or record their screen activity.

iTop Screen Recorder is a reliable application that was developed in order to allow users to capture their screen activity or record and share their gameplay sessions.

The program comes with a pretty modern and user-friendly interface, with a control toolbar that allows users to choose what to record or capture, while also having video guides to help them in the designated tab.

It will allow users to record the activity on their desktop either from the entire screen, a specific region of their choice, or an opened window, while also being able to choose to record at a fixed ratio.

The recording area will be marked by a red rectangle, that is accompanied by a floating panel that allows users to pause or stop the process, while also coming with support for hotkeys, which means they can quickly record, pause or take screenshots.

iTop Screen Recorder is a very handy application that most users will appreciate for its ability to quickly allow them to capture, or record their screen activity and share it with other users.

A great app for recording your screen and taking pictures with your webcam.
1 / 871 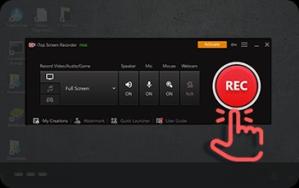 Monkey's Audio 9.04 A fast and powerful audio compressor that doesn’t affect the quality of your music