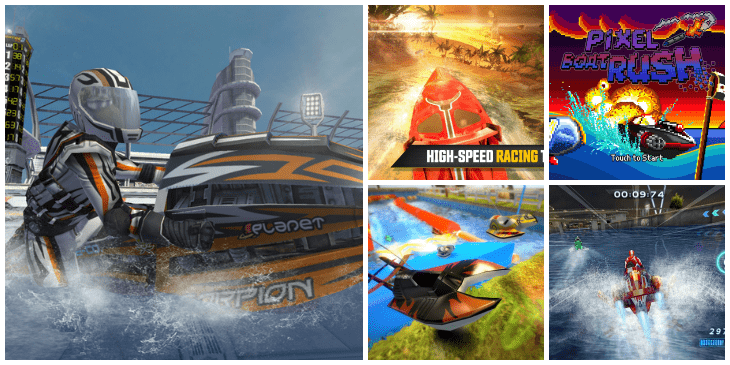 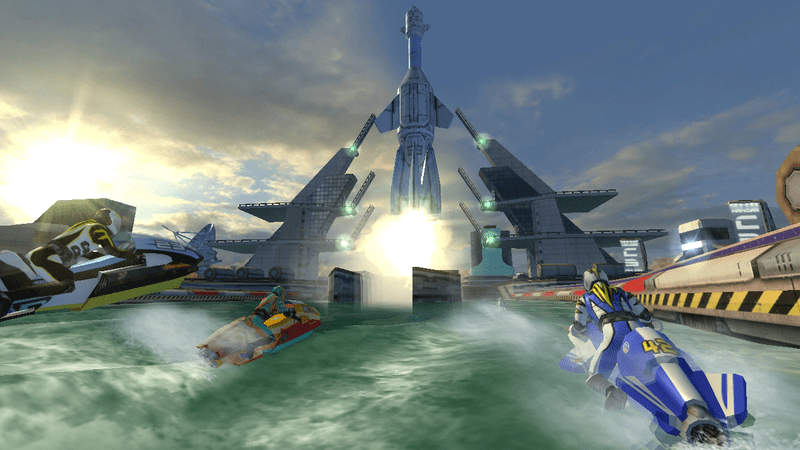 A 2013 release, Riptide GP is still the most referenced game whenever speed boat racing theme comes around, and we see new releases that aspire to set a benchmark higher than that of the Vector Unit original game. Alas, little has been done to that, other than by Vector Unit itself. The console quality of Riptide GP keeps occupying the pantheon of water racing games for mobile. The game offers realistic physics, awesome graphics, 7 top-notch speedboats and hydro jets and spectacular backgrounds. The latter comprise both nature sites and futuristic cities and odd facilities – a total of 12 water raceways. You will be mastering your skills, performing crazy stunts and enjoy an overall exhilarating adrenaline booster of a game. There are three modes – race, hot lap and championship. The game supports Bluetooth and USB gamepads, cloud save, global leaderboards, achievements and a multimillion user community to compete against. In other words, Riptide GP is still one of the best speedboat racing games on Android. If the second iteration that costs $2 is on the expensive side for you, go with Riptide GP, which now goes under a very accessible $1 price tag, especially if you consider the quality. 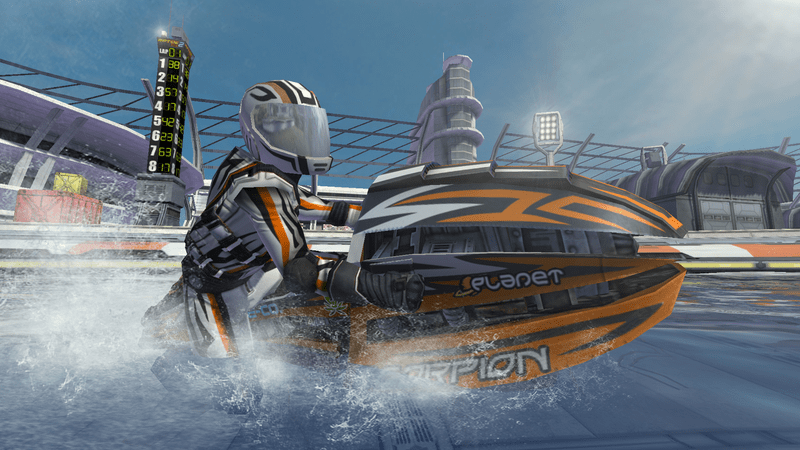 Riptide GP™2 made many Riptide GP fans skeptic, although after a few hours of gameplay it becomes evident – the second iteration is as awesome, if not better than the first one. It has everything beefed up – vehicles, races, stunts, visuals. Plus, it adds multiplayer and a career mode, as well as new tricks and even more spectacular locations. Online multiplayer lets you engage in 4-way real time battles against your buddies in challenge mode or anyone around the world. The career mode lets you race in freestyle, elimination, hot lap and race events, earning cash to upgrade your jets. The latter come in nine varieties, with differing performance stats and colors and can perform 25 crazy stunts. In line with its first iteration, Riptide GP 2 supports cloud save and multi-device sync, gamepad controls, tilt and touch controls, achievements. Overall, it is a wonderful game for a high-end device. 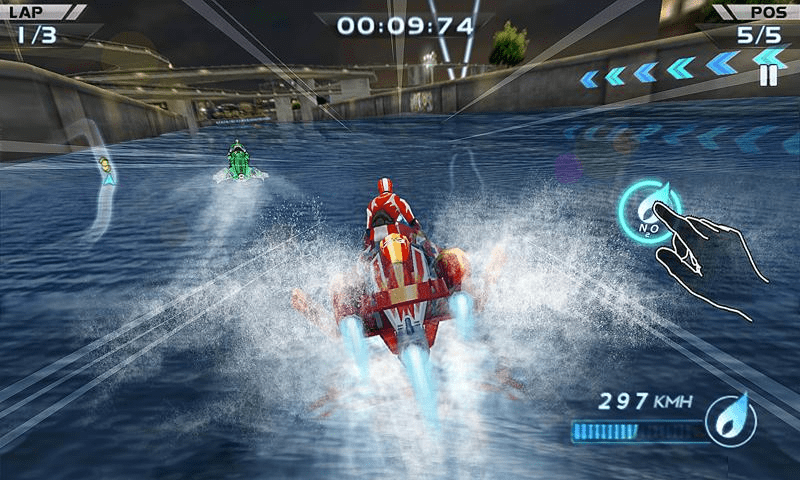 Another free-to-play speedboat racer on Google Play is last year’s Powerboat Racing 3D, and we quite enjoyed its adrenaline rush. If anything, it gets the racing part right, and does not clog your gameplay time with all that lifestyle gibberish. The game features three modes – a career mode with some 40+ challenges, quick-play mode to grind for some cash, and a multiplayer mode that supports up to 4 opponents via Play Game services. The graphics are quite good-looking – 3D, vibrant and bright. It is rather addicting and we have to give Doodle Mobile the credit for offering an IAP system that is not obscene or annoying. The environments are beautiful, and I am sure you will enjoy the game for quite a good while. Some of its tunnels and canals look spectacularly hi-tech and even Tron-like, so give it a go. It’s a good choice for a speedboat racing fan. 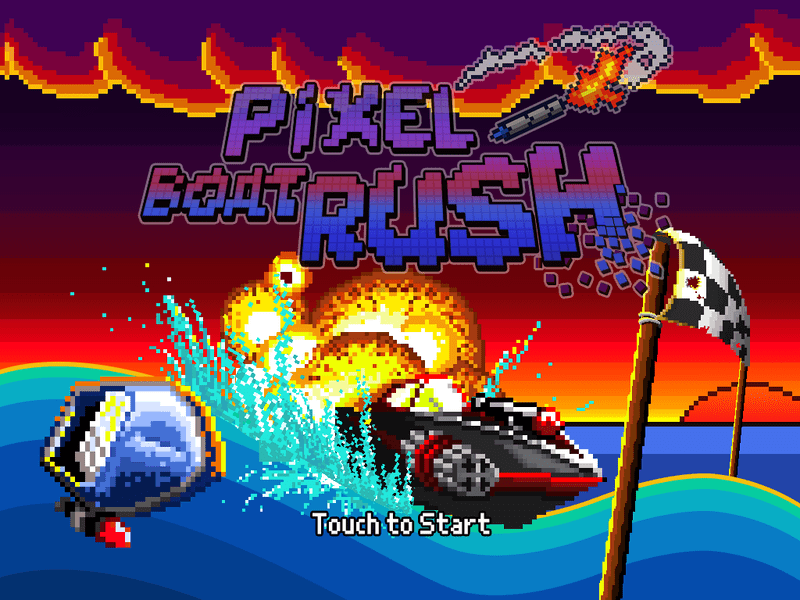 Pixel Boat Rush is a different breed of a water racing game, but nonetheless, a notable one. It is a faux-retro pixel indie gem, loaded with personality, charm and adrenaline. No funky controls – Pixel Boat Rush makes it dead simple. You have two weapon buttons and a one touch racing mechanism (touch to accelerate, release to brake) that lets you control the racing and the combat parts. Yes, besides racing, you will be doing some steaming hot, hilarious and frantic water combat across the game’s 15 tracks and 100+ racing events of 7 types, like last man standing, endurance and more. There are mini-quests that unlock more racing categories. But don’t think too lightly of this seemingly simple game – it holds a surprisingly deep career mode and its gameplay is nothing short of ingeniously hard, but enjoyable. Pixel Boat Rush also features loads of content, like obstacles, funky boost techniques you learn, jumps, power-ups and an excellent replay value, spiced with ridiculous character dialogues. If you think a pixel style game can’t have loads of variety in visuals, take 50 racing boats, configurable and with guns. Trophies, leaderboards, championships, time trials, career and arcade modes, 3 save slots and a wonderful retro soundtrack is by far not the full list of its perks. It is certainly a different take on water racing games, but it is oh-so-perfect for speedboat racing fans. 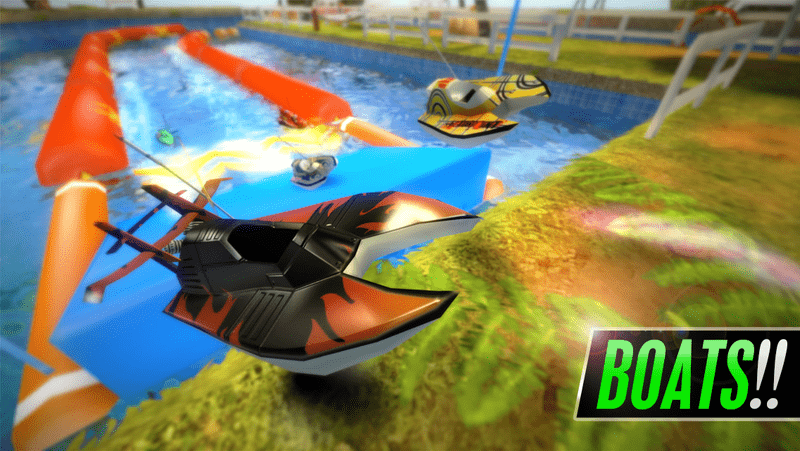 Touch Racing 2 has boats, ok? It’s just that you need to deal with the cars first before you get to the boats, but the game is a pretty solid fun. The game is vividly good-looking and fun – you get to race several types of cars, like off-road and trucks, and also power boats. You need two hands to control the steering wheel and the brakes, and the controls suggest a little getting used to, but accessible. You can upgrade and customize your vehicles in performance and looks – stickers, paint jobs, engine, body and more. The game features a nice multiplayer mode and a leaderboard, and there is a great variety in both the vehicles and the tracks plus environments. It is free-to-play, with some fuel limits and IAPs, but also perfect for short, intense racing bursts on the go. 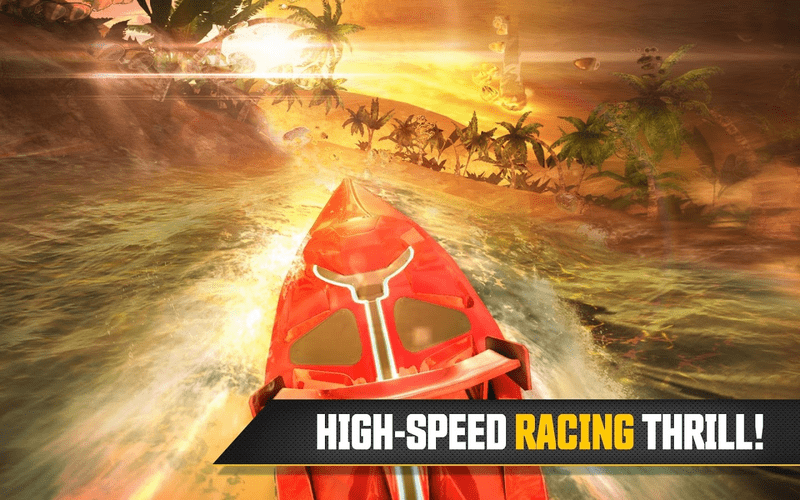 Not my favorite, and we gave it a pretty mediocre rating, but a 4.3 on Google Play with some 15 thousand 5-star ratings says some users love it, so here you go. One of its main advantages is it’s free-to-play, which also means there are plenty of IAPs, but the basic gameplay and tons of grinding are available to everyone with an Android device. It is pretty good-looking, but generic. I found little variety in the speedboats available. The races are fun, and you can perform stunts, grab nitros, take over your opponents and enjoy quite the responsive and customizable controls. The latter support touch, tilt and gamepad options. Achievements and leaderboards are there, but the game focuses heavily on a story, with career competitions, mafia, and a ton of lifestyle “perks” like villas, Hawaii shirts and bikini-clad bimbos. This game will have you shooting from a boat. It’s not exactly speedboat racing in the classical meaning of it, but a rather addicting shooter, which is a port of a browser game. You get to protect a speedboat on its run from an army of military maniacs, firing all sorts of guns at it. You are on the companion boat and you have a whole arsenal at your disposal, including the air support from a helicopter, grenades, nets, and more. It is rather modest in visuals, but a fine time killer. 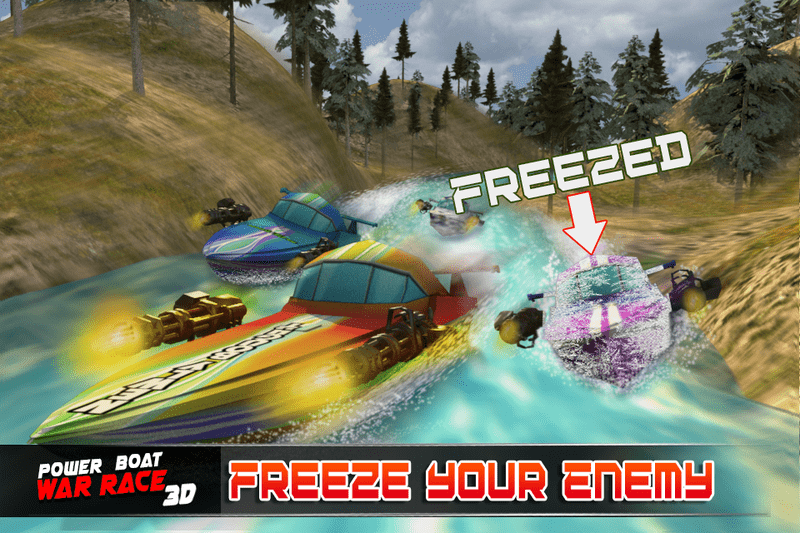 A fresh entrant to the Google Play store, Powerboat War Racing 3D launched in early-April 2015, and having generated quite a few downloads managed to keep a rare 4.9 rating. Right from the beginning, it becomes obvious a lot of hard work has been put into this game, and the result is a fun, addicting speedboat racing and shooting game. The colors are vibrant and the speedboats look nice with the guns and rocket launchers atop – you can customize and upgrade them as you go earning cash. There are 5 opponents, power-ups, repairs you can catch during the race, protective shields and freeze-like bombs you can throw at your opponent. The graphics look simplistic, but there is some variety in the environments, too. The only nag is there is only tilt control. The game could also use a mutliplayer and a leaderboard. In the meantime, try out its first free version and let the developer know what you think. Ads are intrusive, though, and the music is repetitive. 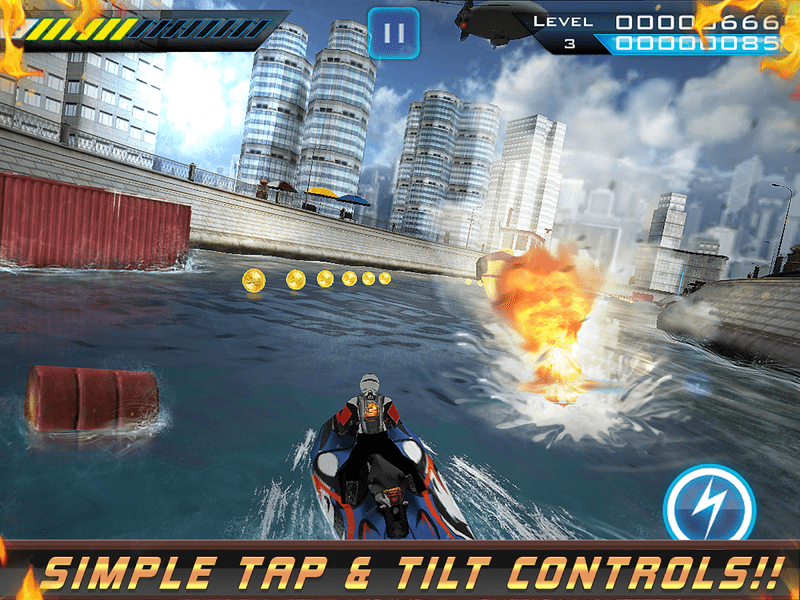 This game seems to be particularly popular among the Bollywood fans, and on the surface it looks like a speedboat racing sibling of Despicable Me minions rush. It is free, and you risk nothing if you give it a go. I tried and quite enjoyed its no-nonsense approach. The graphics look good, and the gameplay is somewhat repetitive when the novelty wear off, but you will be playing it until then with a good deal of satisfaction. It’s got the leaderboards, 3 game modes, touch and tilt controls and nice visuals. This may be a one time entertainment, and the only suspicion I have about it is the over-spammed rating department, which looks like some angry fan decided to take revenge on the developer.

Having spent quite some time digging the depths of Google Play, I must come to a conclusion the speedboat racing niche could use some new noteworthy entries, because as of now, the speedboat racing fans are left to Vector Unit and a few good games while the rest are nothing but occasional time killers. If initially I was going to title the list “the best of,” I gave up on the idea as I played one game after another, un-installing them mercilessly. If we missed a good game, let us know in the comments below – we’ll be glad to play it and include on our list.