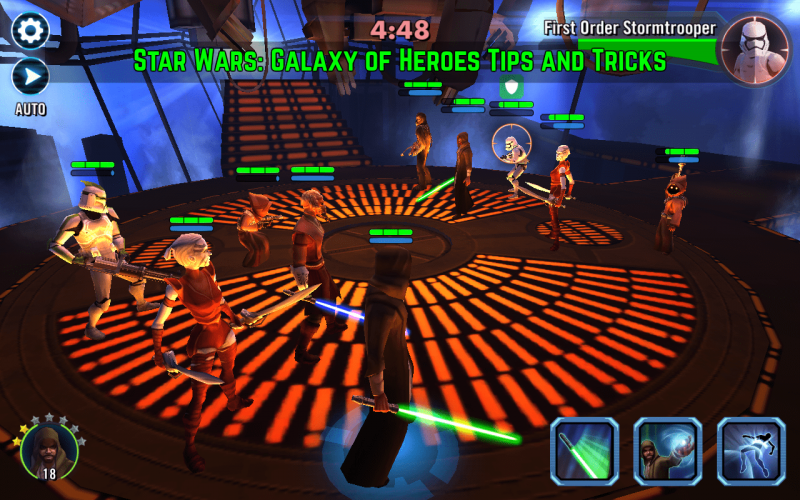 Star Wars Galaxy of Heroes turned out to be a darn addicting time killer, and its main lure is in the stellar assembly of the heroes. No sighting of Yoda, though, but I suspect he’s in the high-end premium packs only available for cash. That aside, you can play both ways – premium and free, completely avoiding spending the real money. Of course, don’t count on reaching the top of Arena being a free player, but still, there is some decent fun to be had here. That said, if you invest in a Barris pack, and grind for Dooku, you are as good as guaranteed to make your way to unlock the Galactic War content eventually, a lot faster.

We will not discuss the basics in this guide, but will focus on particular questions and issues you might have as you level up. So, we just assume you know how to level-up a character by collecting its shards, gearing it up, training it, and most importantly, knowing its special abilities. Then, working out a strategy based on how these characters work in a team.

An absolute must for any team, dark, light, arena, challenge, cantina battles and later on the Galactic War and dailies, is a combo of a healer and a character with a counter-attacking ability and better yet bonus attacks. If you have made it far enough in the game to have some experience in the PvP Arena, you must have seen how the players with a Barris + Dooku combo seem invincible. They’re not, but it’s a very good combination that shows how these two special skills (counter-attack and healing) are crucial. In case you’ve been wondering, Barris is available in a Heroine Pack where she’s a guaranteed drop, while Dooku shards can be obtained pretty early in the game. To smooth that grinding, use SIM tickets to replay the 3-star levels and get the shards faster, but don’t despair – Dooku is a 4-star character. It means he always drops as 4-star, so you will need 80 shards to unlock him, and another 80 to gain another star.

It’s a good idea to have two healers in a team – you will last longer. Besides, some healers available early in the game don’t have much health, and they are an easy target.

Likewise, target healers and the characters with a counter-attacking ability of your opponent. Eliminate that energy-refill source of your enemy, then take out the rest.

Taking out the enemy characters

A wide variety of strategies here is delightful. You can start with the weaker characters because they are faster to take down, thus avoiding that extra damage they would deal. Taking out the healers is a must.

One of the tricky parts is to time your special abilities – don’t just use them the moment they become available. Not to say, don’t use them at all, but think strategically. You can use them in stage one of a battle, so that by the time you proceed to stage 3 they are fully regenerated.

On the one hand, beginning the assault on a seriously beefed up opponent with a special ability may give you a tactical advantage. On the other hand, you may lose this advantage the moment the opponent’s healer covers that damage. So, another trick is to first attack two weaker characters one by one, instead of targeting one. And then, unleashing a special attack. That way, it will/might kill a weaker character and deal a significant damage to the others already weakened.

When fighting the boss, targeting the droids or the support characters first, and the boss last, seems like a viable option, but it depends on a character. So, you simply must know their strong and weak points. For example, in some Challenge missions, Darth Vader is a child’s play, where you can leave the healing droids be – they die anyway when you finish Darth. On the contrary, when you battle Bobba Fett, eliminate the droids first because that guy just never dies and deals massive damage.

In stage 1 and 2 of a battle, if you have one or two enemies left, target them with your basic abilities and save the special ones for a more suitable opportunity to deal the maximum damage.

Never thought I’d hit the bottom of that pot, but there you have it. Some time past level 30, you may discover that training and gearing up your characters has a significant imbalance. You have plenty of droids and gear, but a few mighty upgrades dried up your credits well. Here are a few things you can do. First, go to the Sell section and sell the banking droids – these will earn you some credits for another level-up or two. Next, use your SIM tickets to replay hard levels to grind for loot, shards and credits. Also, spend your crystals on a banking clan pack – this should keep you running for a little longer. Of course, that’s possible if you haven’t spent your crystals on those chromium packs. I did, and I am sorry, as they brought me nothing exciting. Finally, the good news is you have to linger on a limited amount of credits until you reach level 40 and unlock the Galactic Wars. Once you do, each battle in the Galactic Wars series earns you 100-130K credits.

You unlock this content pack when you reach level 40, but don’t count on beating it too fast. Chances are Galactic Wars are meant to be a long-lasting challenge, so expect to be busy with it for 20+ levels to come. To beat it, you will need to have most of your heroes level 60 and several healers. Galactic Wars challenge seems to be counter to Arena, so if you struggle with GW, try upgrading the GW characters and let the PvP team be for a while. This will affect your leaderboard position, but you might discover that beating Galactic War board is a tad easier. This is a suspicion, but I’m inclined to thinking it’s correct.

Have you ever chosen a weaker foe just to suffer a devastating defeat? Yep, that team power rating you rely on when choosing your opponent seems to be off as of now, and does not display the opponent’s team power accurately. Nor yours. So, how do you make an informed decision about which opponent to choose? Ever wondered what the green and purple circles around a character’s avatar mean? Some come with notches on one or either side. That is how you get a rough idea of what you might be facing. Here is an approximate breakdown of the upped character borders and notches:

Which leads us again to the character management, and I can’t stress more the importance of gearing up alongside the training. If you feel stuck and out of credits, set a small goal to reach level 40, and once that is done, set the goal of reaching the lvl 60 to beat some of the rough competition on the arena.

Unfortunately, a recent update changed how PvP battles are judged. Before, the player with the most survivors would win a battle that exceeded the 5 minute cap. Now, it’s a frustrating mess, and even though the last character of my foe died when there were some 4 seconds left, it still counts as a draw, and nobody gets an advance. So, it might be a good idea to speed up parts of the battle with an auto button.

Light and Dark side campaign battles, with the latter unlocked at level 12, and is more difficult generally. Complete the normal levels in a chapter with 3 stars each, unlock the hard mode and grind that, first manually, then by using SIM tickets. The Hard mode in both Light and Dark side earns you the shards.

Challenge battles. You unlock those some time around level 30. Every day, the challenge battles vary, and bring you droids, training remotes, gear, ability upgrades (!), and credits. Challenges require a team of specific heroes it defines based on the bosses in each challenge, so you might have to adjust your gear-up priority if you lose a challenge you need to beat. Bring at least one healer and a character with a debuff ability.

Cantina battles are like the campaign ones, but without normal/hard modes. Here is where you get the shards and the ability material. Cantina battles also have their own energy currency, and you can bring whatever character from both teams, light and dark, to Cantina.

PvP Arena, or the one place to put your crystals to work. You can play 5 battles per day, and you can also pay in crystals to skip the waiting timers. I would recommend using the crystals here to advance in the Arena, but only when you get the longer 16 hr timer activated. Arena fights reward you with Arena tokens you can use to buy character shards in the Arena shipments section.

Finally, the Galactic War PvP board is the hardcore end of the game, and requires lvl 40 to even enter, not to mention you’ll be trying out quite a few things to beat it over time. It’s a long-time goal, and it differs from the Arena in many ways, like the depleted health and special attacks cooldown timer carry over to the next level.

Count Dooku, Barris Offee, Luminara, Old Ben, Kit Fisto, Bobba Fett, Ayala Secura. Talia is not as bad as some say. Beef up Chewbakka, he’s one useful hero. Mind that the Jedi are generally weaker than Sith, with an exception of Luminara, Ayala and Kit. Check out this comprehensive table of hero abilities and max character stats, if you plan to do your homework.

If you are actively following up with the daily challenges, you will harvest additional loot.
Explore the wealth of loot the SIM tickets and autoplay can grant you, making the grinding so much more tolerable.

It’s up to you to decide whether this game deserves a $70 investment to buy the high-tier heroes, or not. Seems fiendishly overpriced, but the top charts are dominated by heavy spenders. Yet, Galaxy of Heroes lets you play every day and offers a wealth of things to do without paying real money, advancing at your own pace. In other words, it’s a counter-productive, time-gobbling black hole of a time killer.