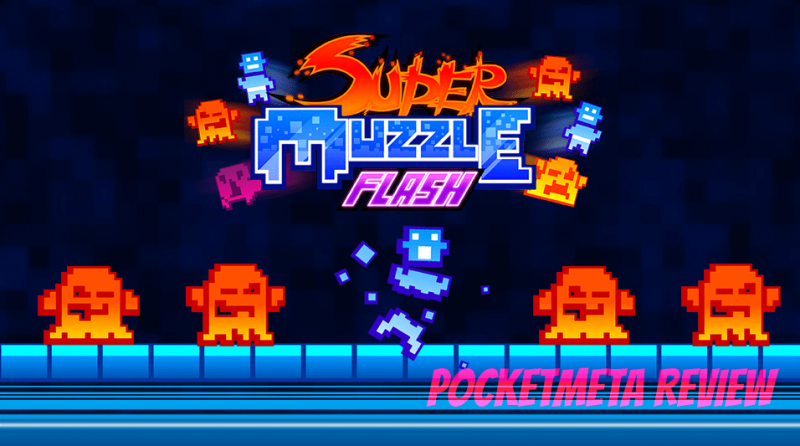 Super Muzzle Flash is an indie mobile game that hit the play stores recently and has won over the fans of the fast-paced twitch and clicker games. It’s simple, annoying, addicting and fast – so get those fingers ready if it sounds like your cup of tea. 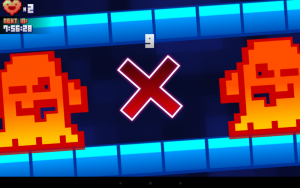 Some gamers call this type of game “snackable,” and I believe the word describes Super Muzzle Flash the best – it’s like salted cashew or Pringles, perfect for a short break, or a laid-back Friday night with a can of beer, if you got nothing better to do on a Friday night. I for one am enjoying a contest of Super Muzzle Flash with my girlfriend and believe me, it’s a great change from the Angry Birds 2.

It’s a surprising mix of simplicity and addiction. Somewhat reminiscent of Hopeless, Super Muzzle Flash puts you in a bit dungeon with three floors, with ghosts and blue robots running back and forth. Your aim is to tap to shoot the ghosts and let the little blue men run free and safe.

It would have been far too easy if it weren’t for the lights, or the absence of them. Case in point – you shoot to kill the ghost AND to illuminate the dungeon for a second to see where the other ghosts are hanging around. 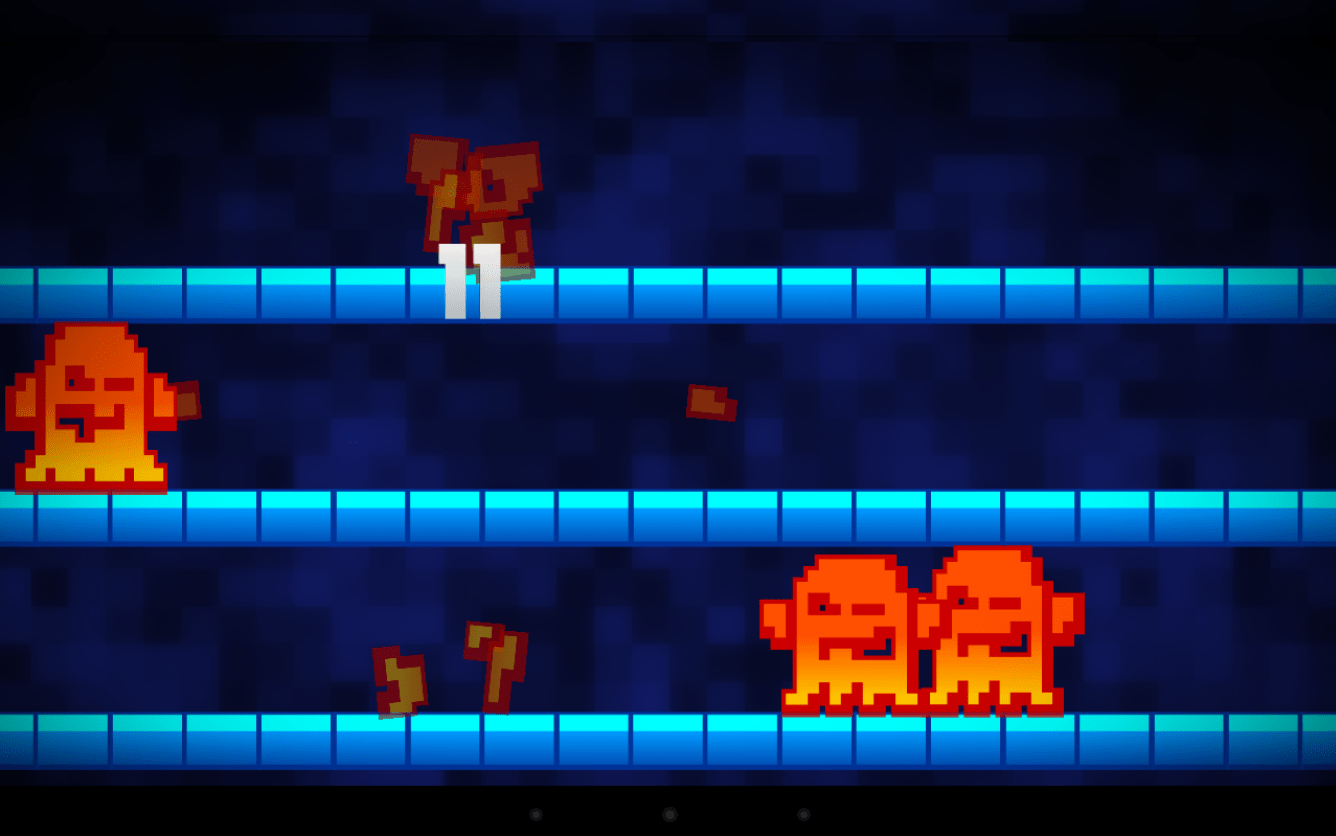 Thus, the game quickly becomes a catatonic flashing of running ghosts disappearing into the dark void, and your rifle shots as you hit them. The challenge is that the ghosts aren’t standing, but moving, so you have to not only remember where you’ve seen them, but also which direction and at what speed they were moving.

Another challenge is the blue robots running among the ghosts, and you can’t shoot those. It’s all very frantic and hilarious, and the controls are one-tap shoot – no more. 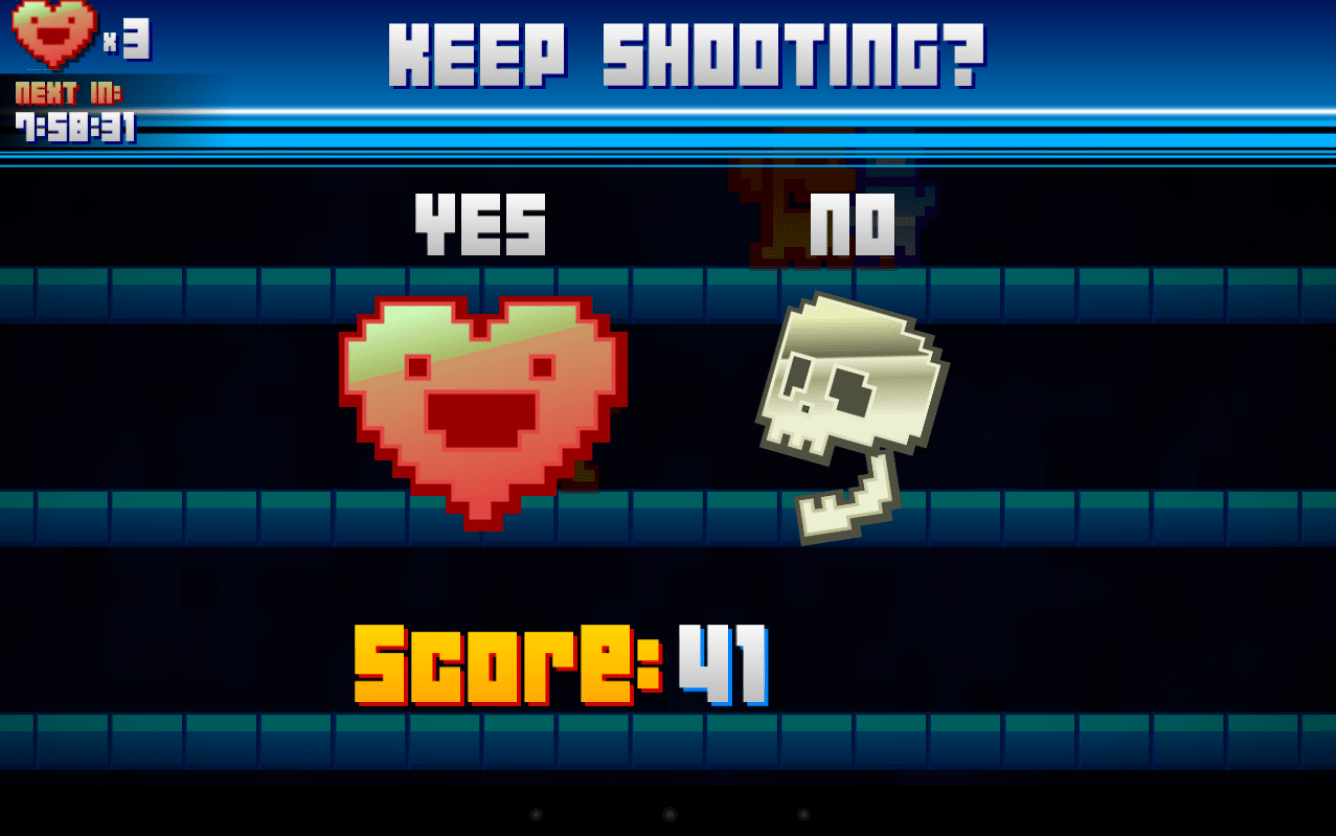 Once you reach 100 points in the Easy difficulty mode, the Hard one is unlocked, 100 in the Hard will unlock the Insane, and the same 100 in the Insane unlocks Godlike mode with the ghosts literally flooding the floors in panic, while the number of randomly running blue guys is great, so shooting them is far too easy.

Miss once – game over.

The game gives you three lives as you start, and you can use one life to continue from where you’ve failed, but you can do so only once. Once you have exhausted the three lives, you will receive a new one in 8 hours, so think twice before you use a heart. If you do so while being on 50 or 60 points, it might not be such a good idea, but if you’re on 98 – go ahead.

Overall, the difficulty is excellent and perfect for the hardcore gamers while the Easy mode may appeal to the beginners and the goofs like myself. At these heights, the Godlike mode seems impossible to unlock. 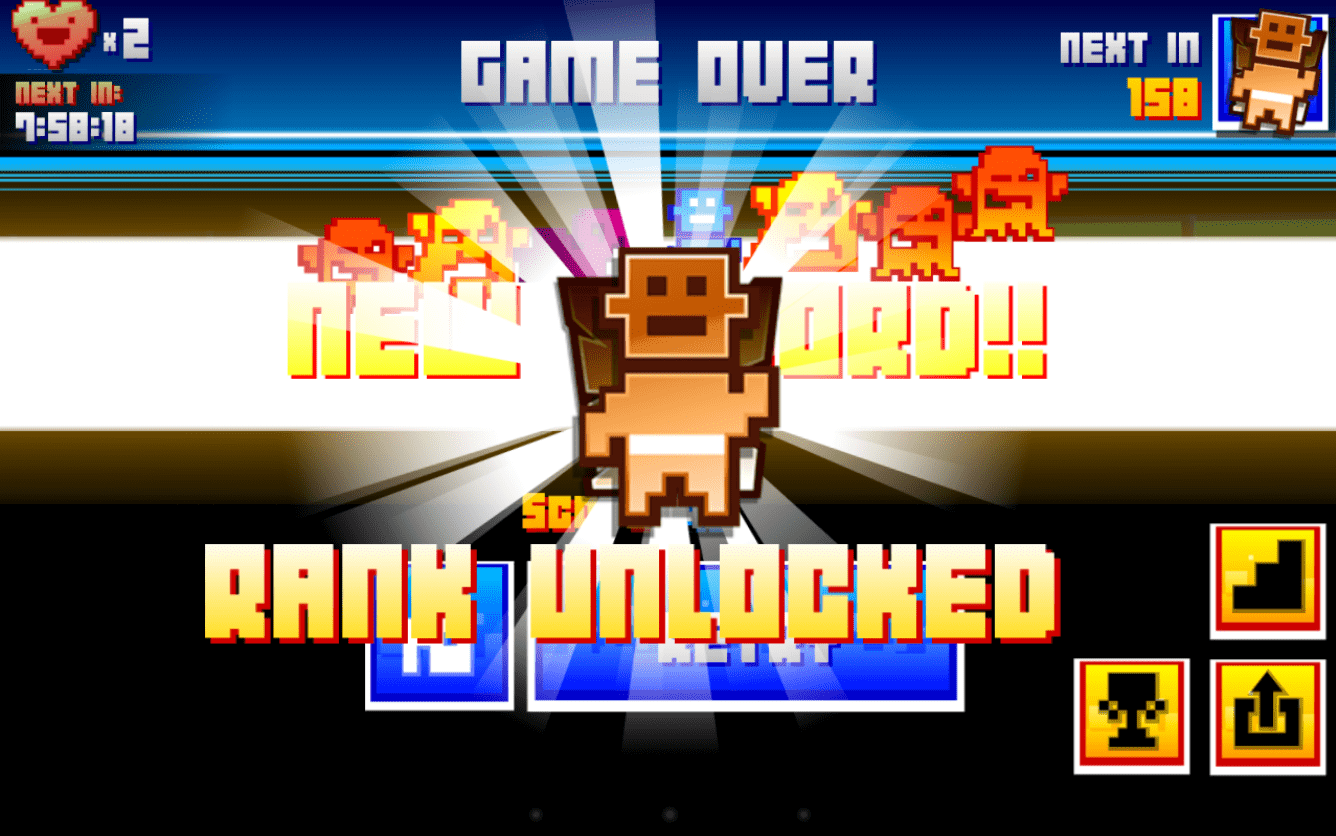 Super Muzzle Flash is a faux retro pixel art, with vibrant neon colors, pixelated characters and Pac-Man style sound score, which is so popular these days. In my opinion, it’s a no-lose choice on the developer’s part, and when combined with the accessible, challenging and addicting gameplay, the game instantly becomes that snack your hand will always reach for whenever you have a chance – it’s that good.

It doesn’t feature a catchy soundtrack, which could have been nice, but the achievements and the leaderboards make for yet another pitch perfect. You unlock robots, and honestly I don’t see any purpose in them other than collecting them, but it’s a rewarding process nonetheless.

One more thing – the game’s trailer does not seem to convey the game’s charm because you only get it when you start playing. The novel idea of making the battlefield dark and illuminating it with the shots is good enough a feature to at least try the free game, and once you do a round of it, I am sure you will like it. 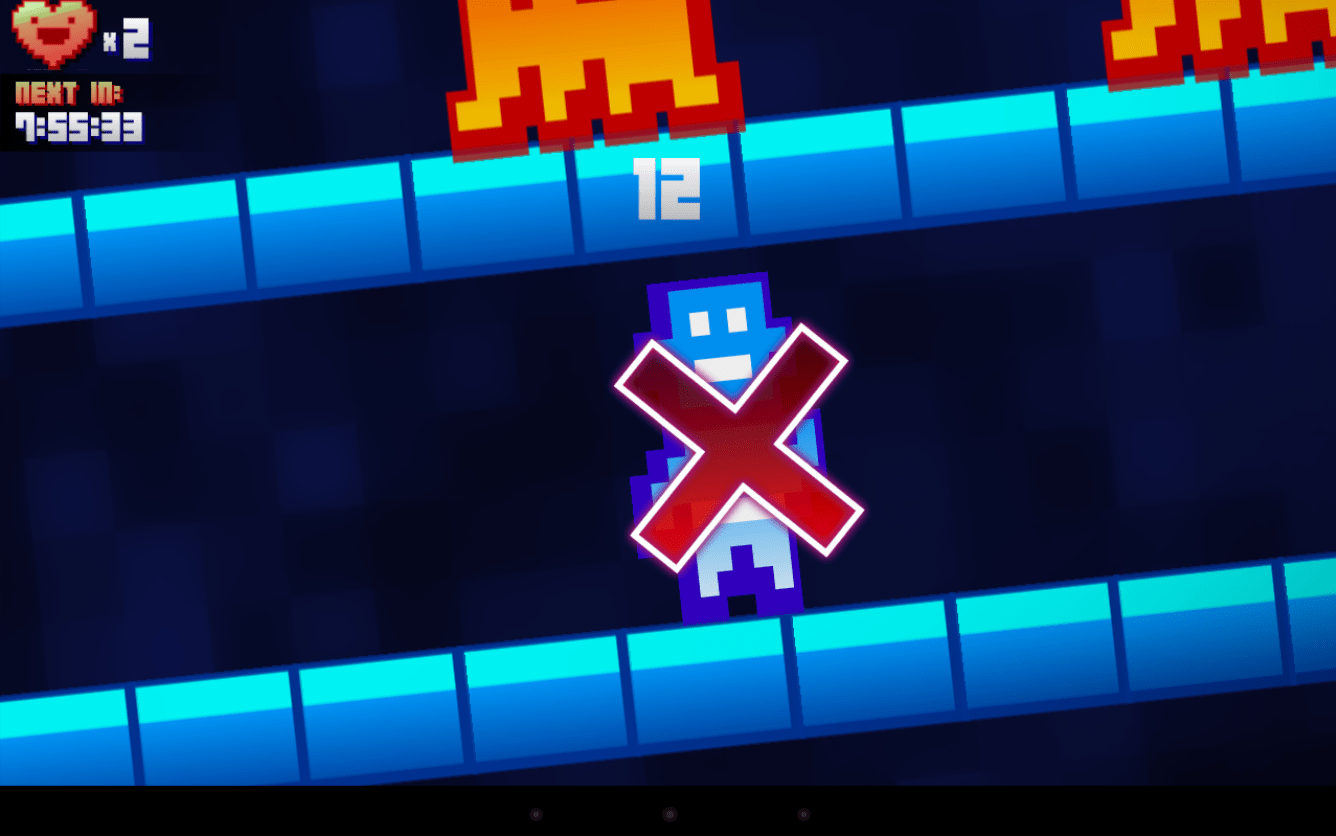 There is only one IAP of $2.99 that unlocks infinite hearts and removes ads, which aren’t too frequent anyway. 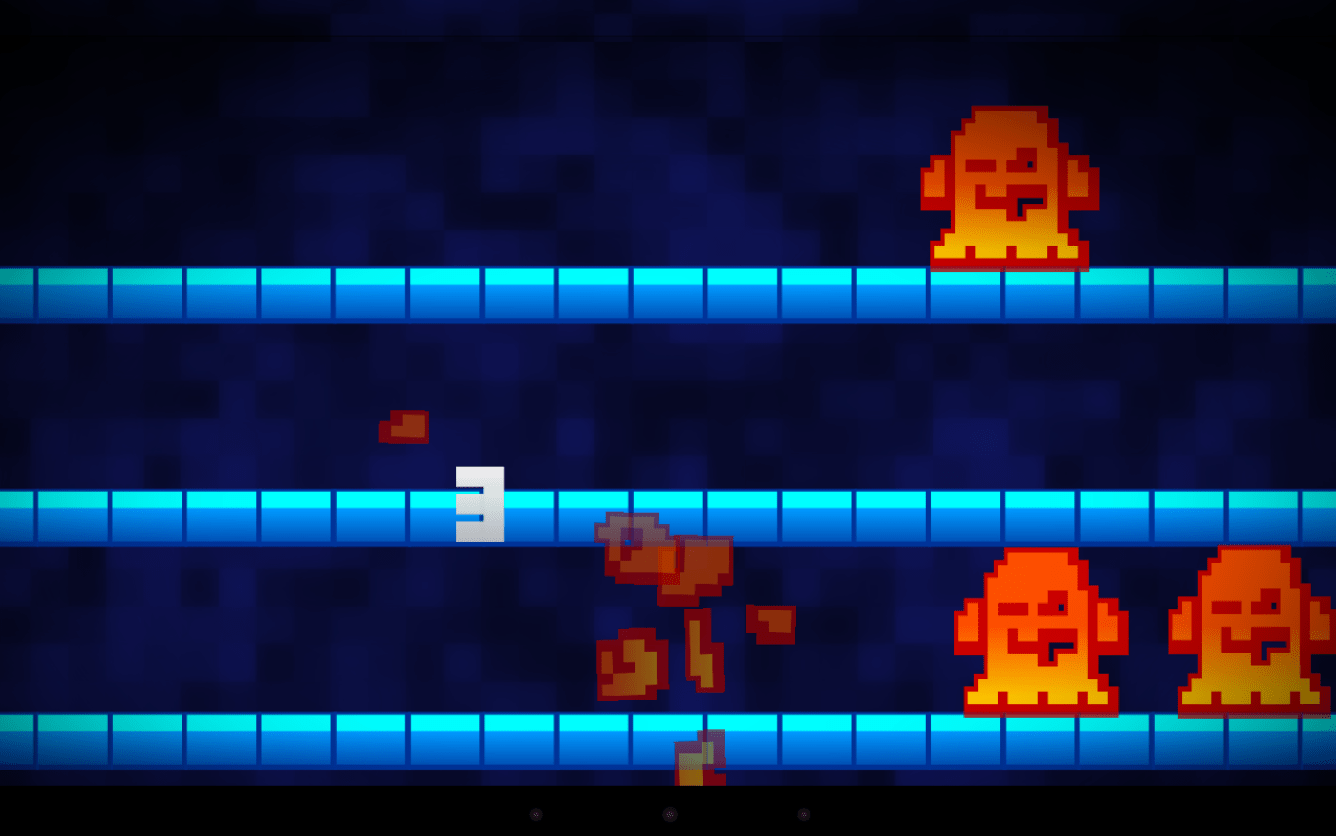 Super Muzzle Flash is an addicting twitch point and shoot game for the fans of the games that test their hand-eye coordination and reflexes. Its difficulty has 4 modes and while the Easy is accessible, everything beyond that is for the hardcore gamers. Its visual appeal is simplistic, yet attractive while the achievements and the leaderboards are a rewarding addition. Overall, the gameplay is very enjoyable if not somewhat irritating, which is a sign the experience is very addicting. Finally, it’s perfect for short sessions on the go; runs smooth and does not occupy too much space on your device. A perfect snack for a break!