SwiftKey Keyboard might be your default keyboard, but its developer is working on something very exciting – Swiftkey Neural Alpha, a smart keyboard that predicts your next word as you type based on different algorithms than those implemented in other keyboard apps. We took it for a spin, and its predictions tend to be more relevant than those offered in Swiftkey Keyboard, Samsung’s native keyboard and many others we have tried. If typing ease and simplicity is a selling point for you, make sure to check out this excessively purple keyboard.

Before you install, please keep in mind that SwiftKey Neural Alpha currently supports only English, so if you are bilingual don’t rush, and don’t expect it to predict seamlessly as your default keyboard does when you switch to a different language.

Second note is the app is currently in the alpha stage, which means it’s still a pre-release early-testing app, so it may lack competitive features, like the many themes of its elder sibling, or the sharing capabilities of Slash Keyboard, but if English is your language, you may want to check it out right now.

Third note is it’s optimized for Android 4.4 and up. Its neural networks, quite possibly, may require some extra computational power, so the developer issued a warning the app may need powerful hardware to perform at its optimal level. 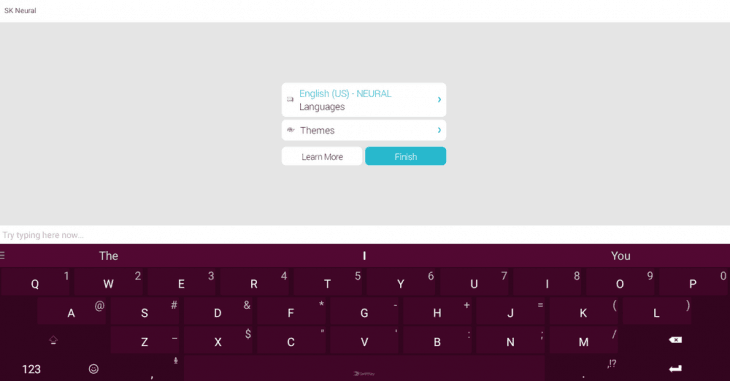 Here is what SwiftKey Neural Alpha does differently – the neural networks implemented in the algorithm of the app are a sub-field of the artificial intelligence, so we’re talking about a small typing Skynet at your fingertips. Its word predictions are much more complex and branched as opposed to the linear predictions in traditional keyboard apps because its AI is similar to the neural networks of a human brain.

SwiftKey Neural analyzes the long sentences and offers predictions based on this analysis, whereas the traditional keyboard apps offer predictions based on the last word you enter. The keyboard also analyzes the relationships between the words in a sentence, the context and the word similarity. The app is learning as you type, so its predictions get better over time. In fact, the app implements SwiftKey’s stats counter, so you will be able to see the count for a lot of parameters – like how many times the app corrected your errors or typos, how many predictions you have approved, and the like. 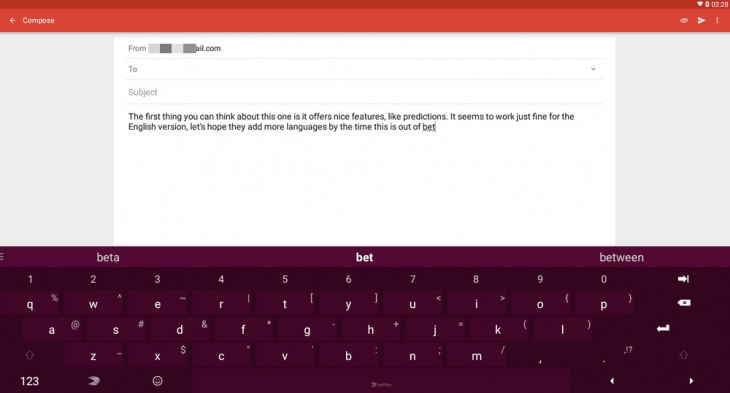 The keyboard has two themes as of now – purple and dark, which looks gray-ish black. You can customize it to your liking – have the number row appear at all times, show the full layout with both left and right cursor, have it displayed in several sizes, in split mode and in mini mode. The app’s settings are accessible right from the keyboard – the hamburger button at the left side above the numbers row.

It supports flow typing and has a voice recognition engine, so you can try dictating. You can set the app to predict the emoji, have the number pad appear on left, show all accents on long key press, adjust vibration and sound, as well as customize how text correction works. I like how the symbols are there on the keyboard even when you’re in the alphabetic layout, so you can long-tap to type a symbol instead of switching to the symbols case. 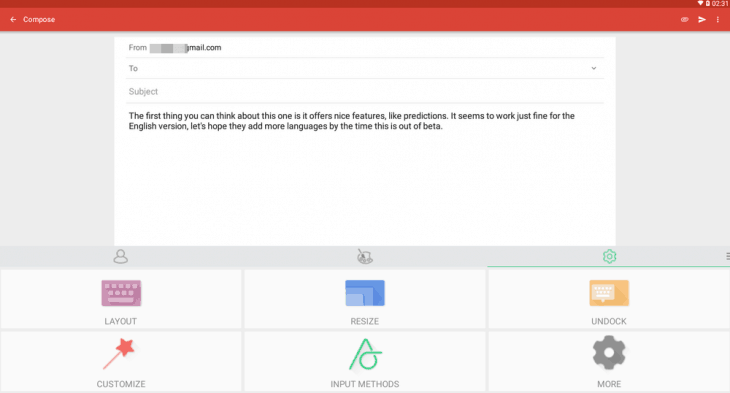 Needless to say the predictions do tend to be very accurate, and I found myself constantly choosing from the predictions offered rather than typing the majority of the words manually. I can see a future where teens no longer need to learn the Grammar and Spelling – the AI would just type for them. But those who need this for productivity are in for a treat. I am not sure the bilinguals among the Android users are ready to switch to SwiftKey Neural and have it as their default keyboard at all times, but it surely is the one to keep on your wish list while the English-speaking users might switch to it already. I am definitely looking forward to see how this project evolves because not only is it a great productivity tool, but it’s also a sneak peek into the future.

SwiftKey Neural uses AI neural networks to analyze word patterns, common phrases and inter relations of words in a sentence to predict words and correct mistakes or typos. SwiftKey Neural has a blog post that explains all the intricacies of how the complex neural networks in the app work to make the predictions more relevant. All the technicalities aside, the main thing anyone cares to know is – is it better than the rest at predicting?

In my experience – it is. Yours may differ, but then again, keep in mind that it’s in pre-release alpha. I’ve been using it for several days, so it’s too early to say it has revolutionized my typing, but yes, I find its predictions to be more relevant than those offered by my default Samsung keyboard I’ve been using for months. The app has decent customization options, good looks and smooth performance, but most importantly, it does feel disturbingly smart.

Keep it on your watch list until it’s a fully-fledged app out of the testing stage, or try it right now. We at PocketMeta like to poke our nose into all things new for sure!