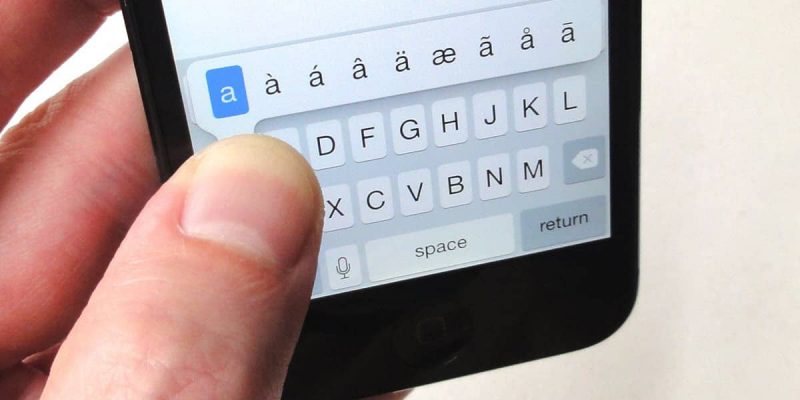 Typing on a touch screen is very different compared to a physical keyboard. You don’t get to feel each key as you type and while you can technically type faster on a virtual keyboard since there’s no need to press keys, it’s also very easy to accidentally touch the wrong keys depending on the size of your device’s screen among other factors.

Many people can totally rock typing on any keyboard, be it a physical keyboard or a touch screen keyboard. However, when it comes to the latter option, which app you use can make all the difference in the world.

Despite the vastness of the Play Store, and the fact that the keyboard is an essential function of mobile devices, there aren’t that many reliable keyboard apps as you’d expect. Even so, there’s a decent number of high-quality alternatives to cater for a large audience so lets take a look at what third-party keyboard apps manage to stand out in the crowd. 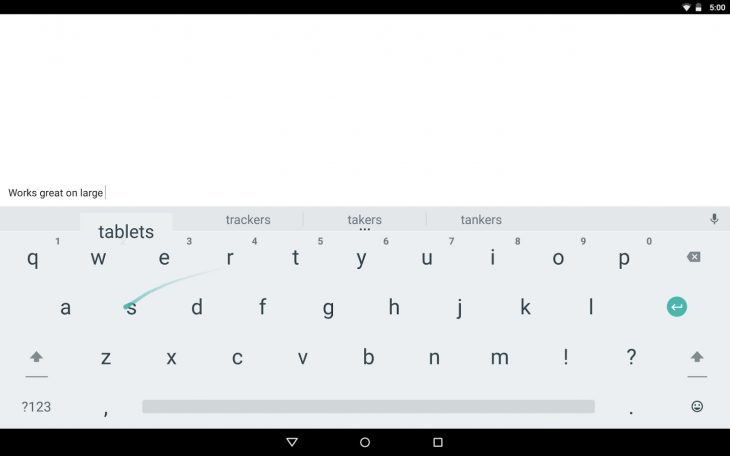 Google Keyboard may be the stock Android keyboard, but it developed quite nicely over the years, plus it’s also available as a stand-alone app, so it can be installed on any device running Android 4.0 or higher.

The app has a clean look and is incredibly responsive, plus it bundles many smart features such as gesture typing, voice typing, auto-correct, word completion suggestions and emojis. The predictive voice dictation feature improves the more you use it and the sync option is a useful addition as well.

There are also many other smaller features you’re going to notice as you use it. For example, it learns your contacts and includes their names in word completions suggestions. Not bad at all, considering Google Keyboard is absolutely free. Definitely recommended if you want a capable keyboard app, but without too many bells and whistles.

SwiftKey can’t be ignored when looking for the best keyboards. While Google’s keyboard is now a reliable app, this wasn’t the case a few years back, and apps like SwiftKey were offering a far superior alternative, and it’s still superior as it bundles extra functionality.

The word predictions are incredibly accurate and speaking of, the app also offers emoji prediction, which you’re probably going to appreciate if you’re into this sort of thing. As expected, the app bundles many beautiful themes for customizing your keyboard and supports over 100 languages.

SwiftKey works just as well as Google Keyboard, but it does offer plenty of customization options and is a must try if that’s what you are looking for.

Many users consider Swype to be the best keyboard app. This may not be true depending on your personal preferences, but it’s safe to say it’s at least among the best. The app masters the swipe method for character input, which is one of the easiest way to speed up typing on a touchscreen keyboard.

It also learns your typing habits and the app’s dictionary constantly updates itself with new words and phrases you type. One of the most useful features of the app is its ability to automatically add spaces between words – this alone can significantly speed type flow.

Furthermore, the app supports Android’s TalkBack and Explore By Touch accessibility features, which makes it a viable option for vision-impaired users. Swype comes with a free trial after which you can purchase it for the small price of $0.99. A large number of themes are also available at varying prices as IAPs. 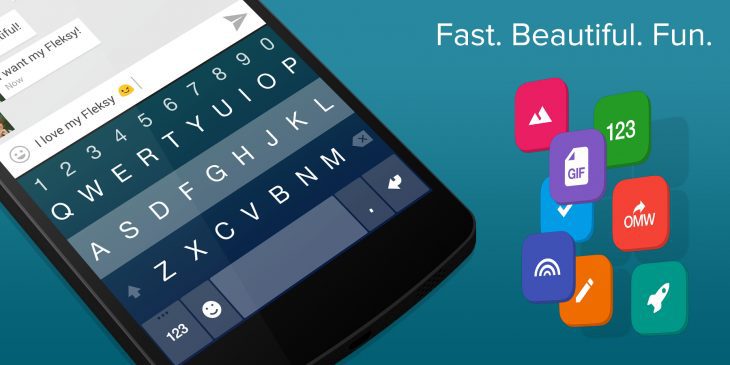 If you like achievements, Flesky has one that might interest you. It holds the Guinness World Record as ‘the fastest keyboard in the world’. As usual, this type of thing depends from one user to another. After all, each with his own method of typing, right? Nevertheless, the app bundles other interesting features that make it worthy of your attention.

If offers multiple keyboard layouts, swipe typing, a smart autocorrect that learns the words you type, an editable dictionary, as well as gesture-based shortcuts for several actions like deleting words, adding new items in the dictionary and undoing corrections. It also has an interesting rewards system that motivates users to learn how to use the keyboard.

A special feature of Fleksy is support for GIFs, and it includes plenty to choose from. The app offers a 30-day trial, which is plenty of time to try it out and decide if you want to spend $1.99 on it. It also bundles a large number of themes, although very few are free. 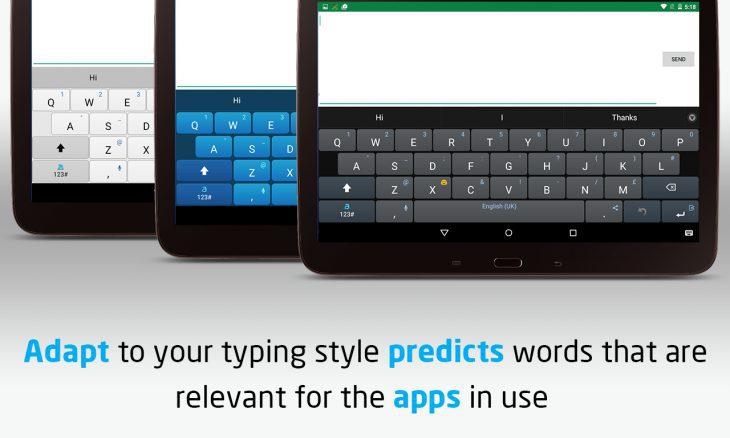 This particular app doesn’t have the popularity it deserves. Adaptxt is a functional keyboard that’s also good looking and boasts some pretty smart features. The app has a context-aware word prediction feature which takes into account your writing style, interests, location and the app you’re using.

It works great on various screen sizes and provides landmarks, street names and even whole phrases as suggestions. Other important capabilities of Adaptxt are its support for 120+ languages, as well as tap or swipe to type and application shortcuts.

This app doesn’t compromise on customization options either. You can choose from multiple keyboard layouts, change the background, key shapes and font styles, plus it lets you create your own themes among others. All at the unbeatable price of free. Definitely a must-try if you’re looking for a good, free keyboard app. 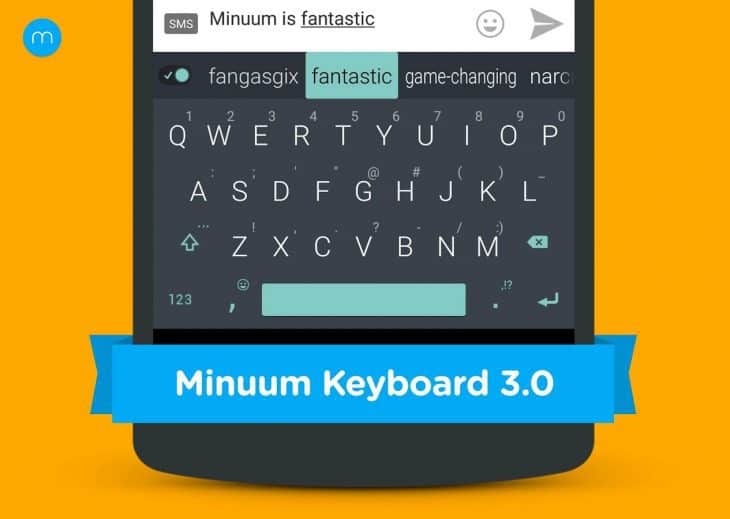 Minuum is an interesting keyboard, created to ease typing for those blessed with larger fingers. It’s one of the best apps for sloppy typing – just punch those keys and stuff that makes sense will magically appear. Also, it supports one-handed typing and lets you re-position the keyboard, although the latter option is more useful on larger screens.

Another thing Minuum brags about is how good it is at offering emoji suggestions. If you always avoid adding emojis to your conversations because it seems to complicated to search for appropriate ones or start memorizing them, perhaps this app can solve your problem.

Furthermore, the app comes with smart word predictions and vocabulary, voice typing, gesture-based shortcuts and split-screen support. Minuum is on the expensive side since it costs $3.99 but totally worth it if your clumsy fingers always hit the wrong keys.

ai.type is another app that’s quite pricey compared to most third-party keyboards since you can buy it for $3.99. The good news is, all of its themes are free, and they come by the thousands, so at least you won’t get ripped off in the customization department. You can even create themes for scratch if you want to.

This particular app is incredibly versatile – it offers swipe typing, 800+ emojis (with auto-suggest), automated next word prediction, completion and correction, a layout with a 5th top row and voice narration among others.

And if you’re worried about your privacy, you should know all text typed with this app is encrypted so any personal information you type remains private.

TouchPal is a well-aged keyboard app that now touts itself as an emoji keyboard. It may seem disappointing if you’re not particularly interested in emojis, but the truth is, they’re trending right now and the app bundles so much more than that.

However, since we’re still in the emoji department, the app offers more than 800 emojis as well as emoji art and 100+ themes to change its looks, plus an option to create new themes from scratch.

Regarding functionality, TouchPal is more than capable. It has contextual prediction, swipe typing, an advanced clipboard capable of storing multiple entries, auto-correct, shortcuts for frequent actions like copy/paste and many more.

GO Keyboard is definitely one of the most downloaded apps from the Play Store and that’s probably because it’s brimming with features. It includes more than 1,000 themes with new ones being added every week, several keyboard layouts, support for sounds and special characters and a customizable background wallpaper.

It also packs many of the functions you’d expect from such an app, like auto-correct, voice input, slide-to-type, tablet mode and support for over 60 languages. Overall, GO Keyboard is a good app and has excellent customization options, but in terms of functionality, there are better alternatives available.

Multiling O Keyboard may not be one of the most popular keyboard apps but it’s fairly well-known and has good ratings in the Play Store. As you can see from its name, the app is focused on offering support for an impressive number of languages, currently 200+. To be honest I haven’t seen any other third-party keyboard with so many supported languages. And more importantly, you can easily switch between them.

There are many interesting features available in this app. For example, besides offering several common layouts like QWERTY, AZERTY and DVORAK, the app lets you create them from scratch and themes are customizable as well.

It doesn’t disappoint when it comes to emojis either – there’s even an option to create your own emojis which doesn’t impress me at all, but I’m sure many users will disagree. When it comes to having fun while typing, it also offers a unique feature that can transform your text to special characters, for example ξχ๑тïς тεχт.

Looking at what handy features it provides, it’s pretty clear Multiling O Keyboard deserves far better ratings. Of course, functions considered essential for a decent keyboard are not lacking and there are plenty of advanced options as well – swipe, gesture-based shortcuts, split and floating modes, T9 prediction, a built-in calculator and many more.

What keyboard apps have you used over the years and which is your current favorite? Let us know in the comments section below or drop us a line on Google+, Facebook or Twitter.