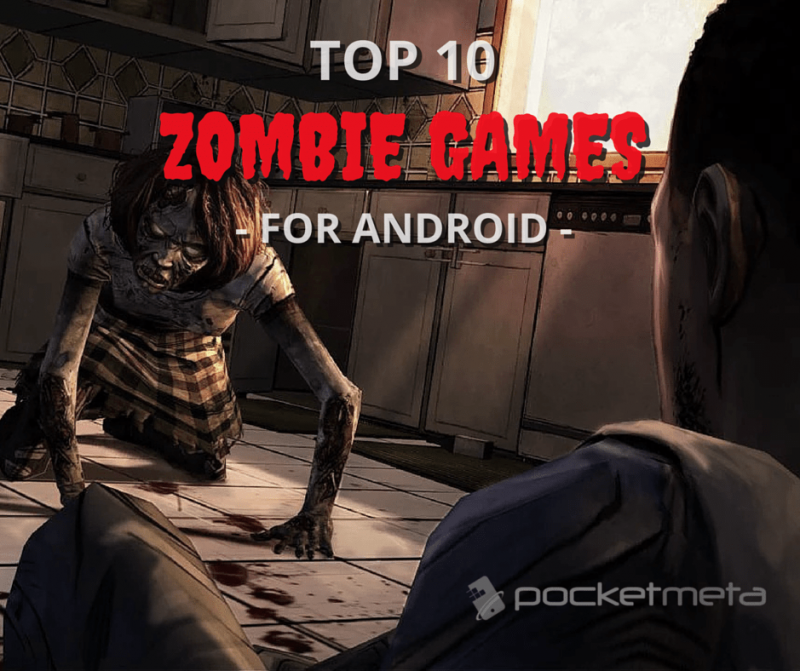 With their usually greenish-rotten appearance, dead eyes and insides spilling out here and there, zombies are an incredibly popular theme in both games and movies, compared to many other fictional creatures. Zombie games are abundant, and the Android ecosystem is not lacking in this department either.

While the classic zombie game usually involves violently killing brain-eaters in apocalyptic scenarios, plenty of titles have lighter themes that won’t give you the chills, but do offer a fun experience. We handpicked some of our favorite zombie games with an assortment of play styles to keep everyone happy. The zombie genre is crowded, to say the least, so it wasn’t easy to leave some titles out, but if you know a great zombie game we didn’t feature, don’t hesitate to share it with us in the comments section. 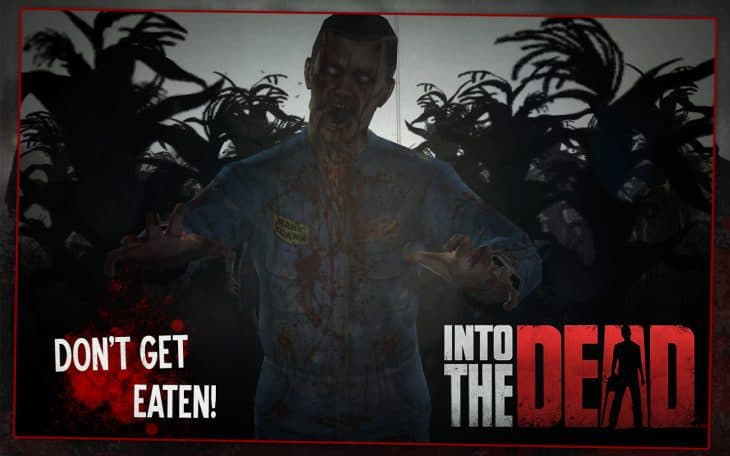 If you’re into the classic zombie infested apocalyptic scenario, Into the Dead is a must-try title. The game is a first person shooter where you have to survive as long as you can. It’s mostly focused on missions and minigoals rather than a story, but definitely fun to play when you have time for a quick gaming session.

Into the Dead has polished graphics and offers plenty of weapons and perks you can use to stay alive. Many are available via IAPs but even the free version is enjoyable, although with a limited selection of tools at your disposal. 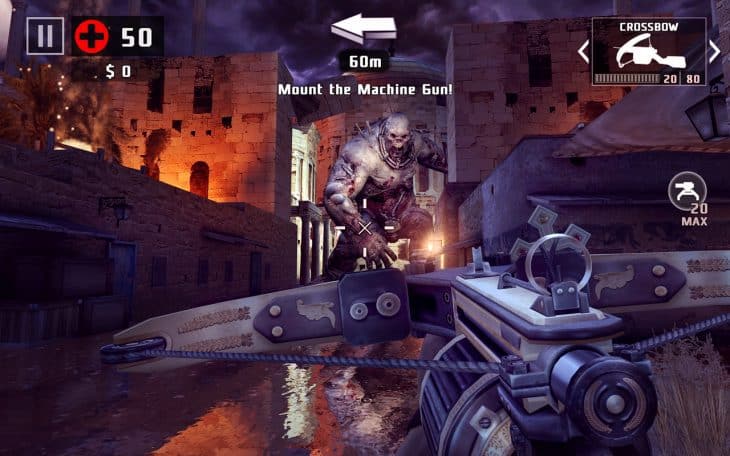 Dead Trigger 2 is a veteran in the zombie game market. Even so, it managed to keep its ever-expanding fanbase happy until now. It has some amazing graphics and plenty of action to still be one of the best FPS zombie games currently available.

This game has pretty much everything you could ask for in an action-packed shooter game: stunning visuals, tons of weapons, multiple regions and scenarios, a solid reward system and multiplayer among others. Furthermore, the developers are delivering regular updates with improvements and new content to keep players engaged. 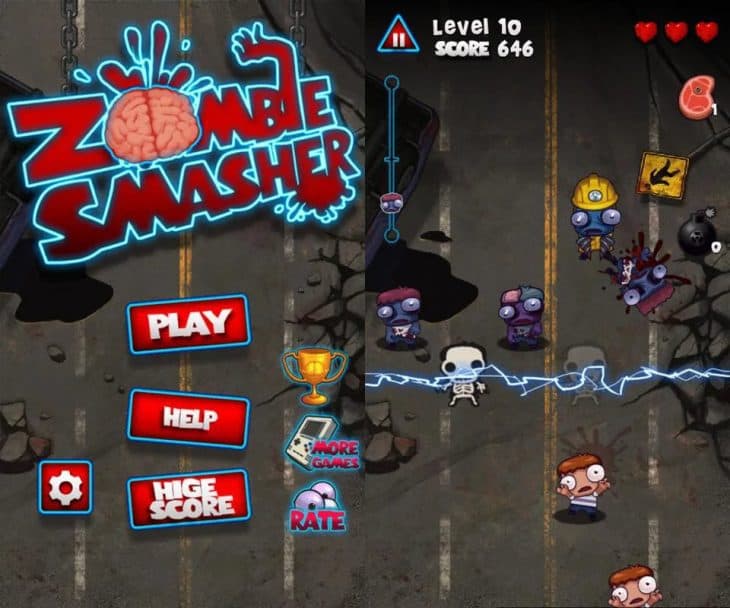 Zombie Smasher takes a casual approach to the whole zombie theme, perhaps this being the main reason why it makes such an addictive time waster. The cartoon-style zombies with bulging eyes are the opposite of scary and they manage to die in hilarious ways, so you’ll probably enjoy splattering some undead brains on your phone’s screen as you’re trying to clear your home town of invaders. There’s a story mode, a survival mode and a timed mode as well as a variety of zombie breeds to mix things up.

The Walking Dead: Season Two (and Season One) 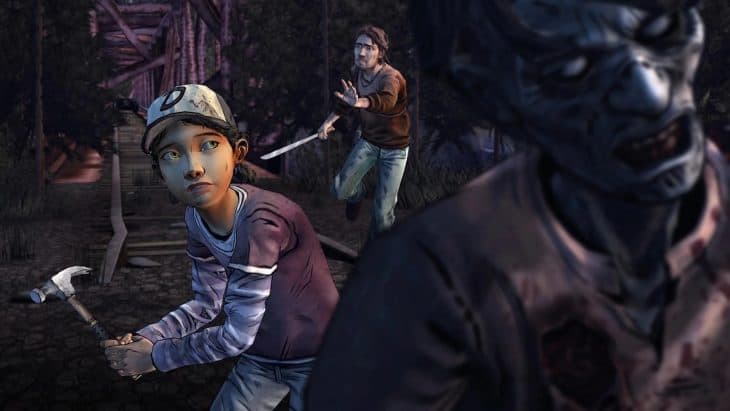 The Walking Dead Season One and Two are story-centric games, based on the original comic books, not on the popular AMC show as you might be tempted to think. Each game is a five-chapter interactive story, in which your choices dictate how it plays out. If you like the genre, I strongly recommend you don’t skip Season One as everything you decide in the story will be reflected in the sequel, making it a great follow-up.

Both seasons have plenty of content to keep you occupied for hours, but make no mistake about it: in reality the The Walking Dead games are not freemium. You can download them for free, but in each season only the first chapter is unlocked from the start (just to get you hooked) and the rest can be purchased via IAPs. 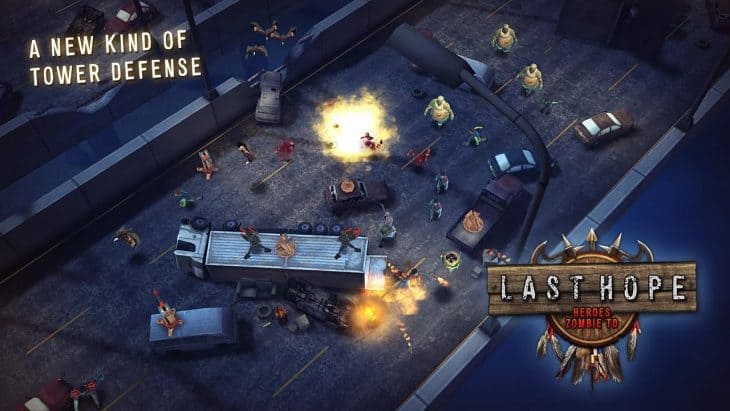 Keeping my promise to deliver a varied roundup of zombie games, it was practically impossible not to feature Last Hope – Heroes Zombie TD. This indie game that’s way less popular than it deserves, is an amazing tower defense game you’ll surely love if you have a sweet spot for strategy games.

The post-apocalyptic scenario is just a small part of what Last Hope has to offer. The game features three heroes to choose from, special skills, researchable towers and range of zombies that sometimes behave in unexpected ways. And let me tell you, this game will give you a challenge so be prepared to spend some time replaying certain levels to find out better strategies. Last Hope does include several IAPs (mostly coins), but it’s playable even as a free title, although you’ll have to grind more in that case. 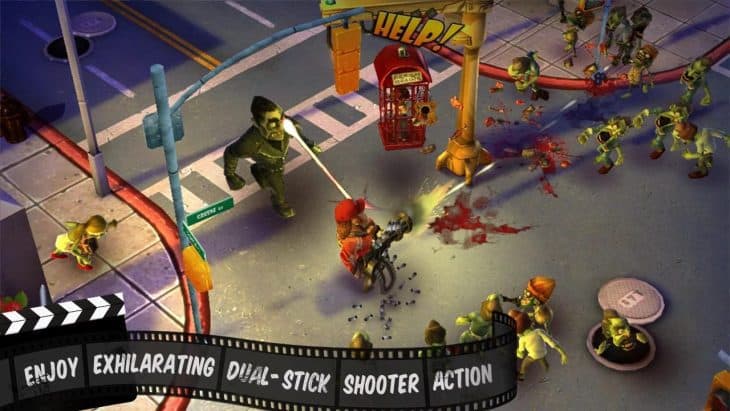 Zombiewood offers a different funny take on zombie invasion scenarios. This time, zombies have taken over Los Angeles and you can practice your shooting skills in various movie sets, completing objectives to unlock more movies you can play in to keep fighting against hordes of flesh eaters.

The straightforward controls consist of two virtual joysticks, one for moving around and another for shooting. There’s a decent arsenal of weapons, armor and powerups you can get with the in-game currency you earn. Some weapons and boosts can only be unlocked via IAPs, but they’re not vital to progress so Zombiewood can be a lot of fun even if you decide not to invest money in it. 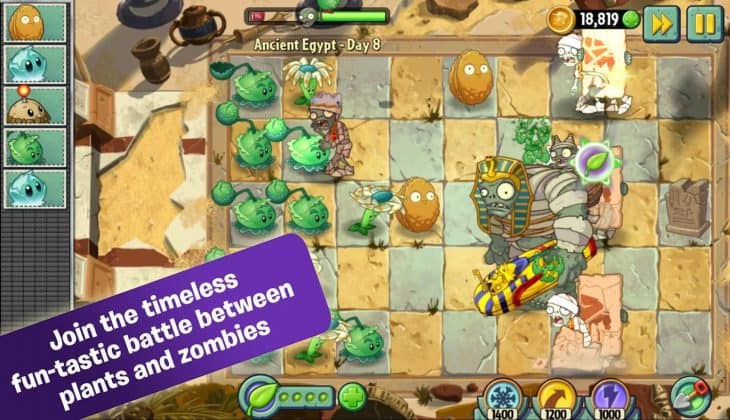 This game probably needs no introduction as it’s a zombie classic by now. This is the sequel to the oh-so-popular Plants vs Zombies using the same mechanics but with new plants, new zombies, levels, bosses, powerups and other stuff too. In all honesty, it’s far from my favorite game from the list, but as one of the most popular zombie games ever, I can’t leave it out.

If you played Plants vs Zombies or you like action strategy games, Plants vs Zombies 2 has plenty of content to offer. Nevertheless, it’s one of EAs games and they never hesitate to boost their profits from popular titles, so expect PvZ 2 to be riddled with IAPs that will take the fun out of it, if you’re not willing to play it as a paid game. 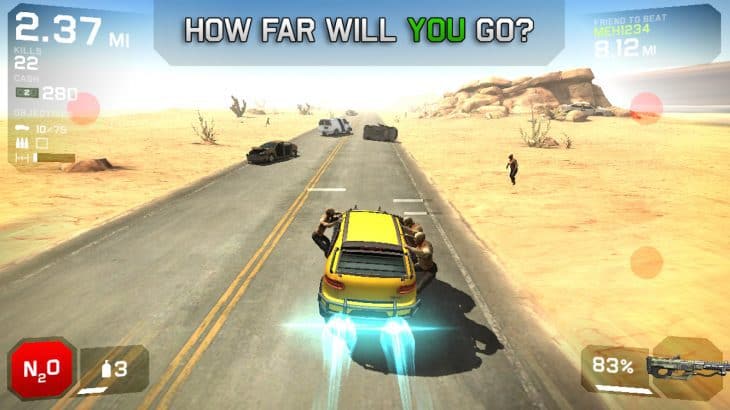 Finally! Shooting zombies from a speeding car on the highway – a refreshing change from all the ‘on foot’ zombie shooters featured on the list so far. You won’t have to worry too much about steering the car but you will have to make sure it remains intact while you’re slaughtering zombies. Otherwise it’s ‘end game’.

The game features several cars, weapons and zombie types as well as the awesome nitro boost that will speed up your car and let you run down zombies faster. The replay value is more than decent as every day you get a new challenge and the road is randomly generated in each new game you play. Also, it’s worth noting IAPs in Zombie Highway 2 are completely optional and unnecessary to progress through the game. 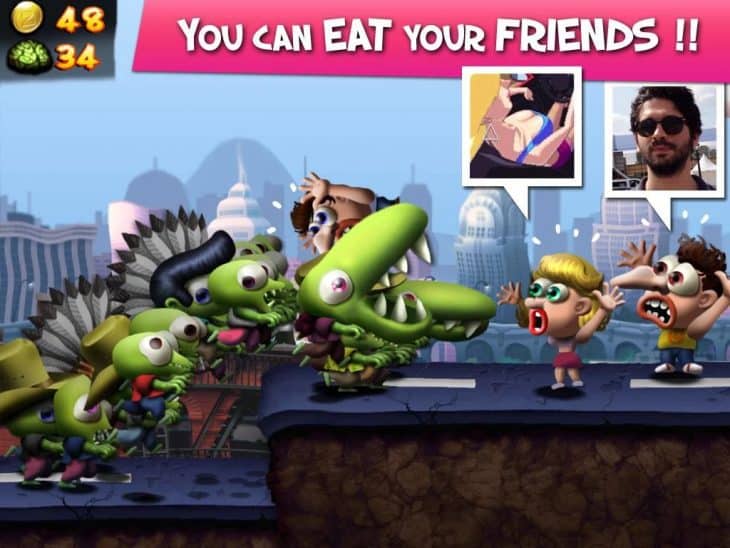 This comic-y zombie game with Pixar-like graphics lets you play in the other team for a change. After all, what could be more fun than being part of a zombie mob and attacking innocents who managed to survive this far? And it gets better – the humans you attack will turn as well, adding numbers to your zombie pack.

Players can go through more than 300 missions in 9 locations across the world, and use a various powerups to keep the pack of brain eaters going. An interesting thing about the game is it doesn’t end if the zombie you started with dies, instead it continues as long as you have at least one zombie still alive. 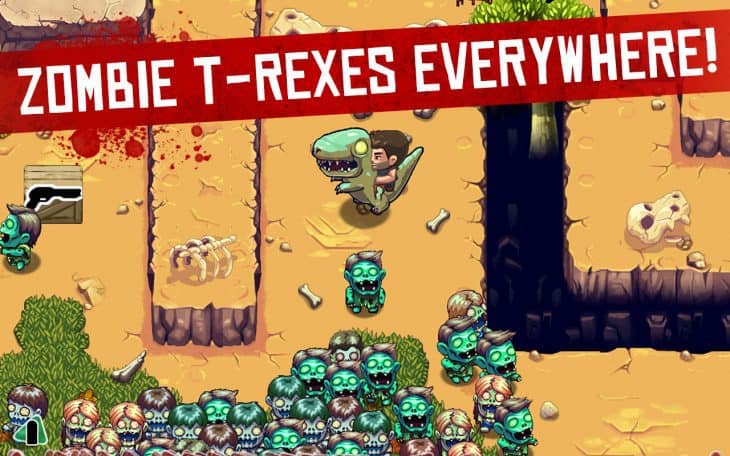 Even the prehistoric T-Rex can be turned into a zombie, or at least that’s what you’ll find in Age of Zombies. From the makers of Fruit Ninja, Age of Zombies is a crazy fun game in which you can play as commando Barry Steakfries and take out zombies throughout different ages.

It’s exactly the opposite of the more serious and gory zombie shooters. Regarding play mechanics this is a one man show, although you get quite a few weapons to choose from, while also being able to exploit your surroundings – e.g.: lure zombies right in front of an incoming train. I definitely had some laughs while playing it despite the fact I’m not particularly attracted to zombie games. Also, unlike the rest of the games from our list which are freemium, this one has an honest $0.99 one-time fee. About as rare as a zombie T-Rex might I add.