I can not imagine a regular work day without the Notepad app, which has been a steady presence in Windows ever since the 1.0. A veteran of apps, Windows Notepad is 30+ years old. Notepad has a minimal draw on your computer’s resources. It loads instantly; it is the fastest way of jotting down notes, clearing large chunks of text from formatting, or storing information in small-size format.

However, it is also one of the most neglected apps. That is, neglected by Microsoft because new features never seem to make it to this app.

In the meantime, there are many fine, free and just as useful apps that offer Notepad’s features, and some more. It is when you compare Notepad to a couple of these non-MS apps that you see where the veteran falls short. It does not handle newlines in Mac OS text files, or Unix, lacks advanced formatting, or block-selecting, does not support MDI, syntax coloring, macros, or code folding and more. So, in case you have been missing some features in the good old Notepad, check out the following alternatives.

Designed specifically for coders and developers, Notepad++ has become wildly popular among everyone else due to its extensive features, ease of use and light weight. 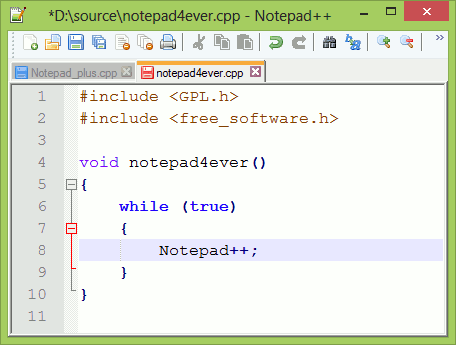 Quite a few things make it instantly more attractive than the Windows Notepad. First of all, it has line numbers, a comprehensive search tool, syntax highlighting, zoom, and macro recording. It also supports tabs.

Where Notepad++ excels is the plugins in the Plugin Manager, among which you will find spell checker, script executor, hex editor, FTP client, and more. If you can not find the desired plugin in the manager, you can download and install it manually. 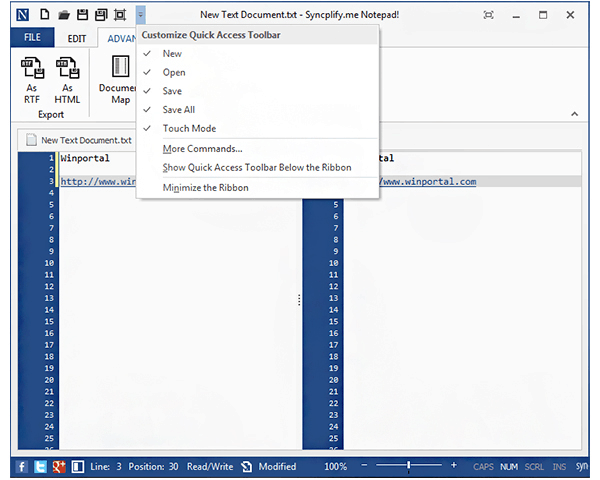 I am not the biggest fan of the app title, but this app excels when you use it for writing rather than coding. Here, you will find the familiar MS Word-style ribbon with drag-and-drop editing, customization for margins, headers, footers, and the nifty find-and-replace feature, complete with the saved history of your replacements. Syncplify.me Notepad! Supports syntax highlighting for 35 programming languages, too. 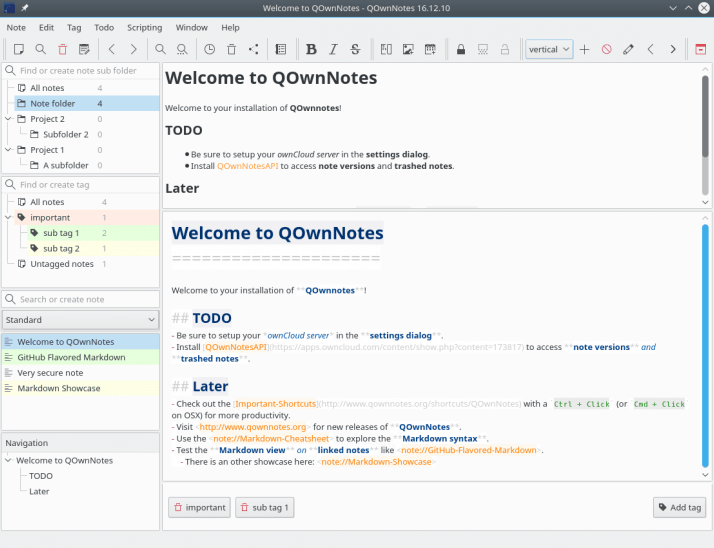 Another name hard to memorize, but this little app works great if you need a lightweight app to jot down lists, notes, and to-dos. Yes, yes, there is a gazillion of to-do, notes and lists apps, but some people like it short and sweet as in Notepad.

If you are one of them, try QownNotes because it allows you to organize your notes, lists, and to-dos into projects and folders, and sub-folders. You will find them in the right-side panel.

QownNotes supports images, hyperlinks, tables, and rich text notes, and comes with a built-in calculator, as well as the tool to import your stuff from Evernote. Moreover, it can sync with Calendar Plus with AES-256 encryption, so it’s got privacy, too.

EditPad Lite  is, as the name suggests, lightweight. If you do not need too many overhauls and improvements for advanced users, but rather an improved user interface and a few extra features, try this app. For example, it supports tabs so that you can work with multiple files simultaneously in a neat, organized way. A nifty feature is it lets you customize the app based on the file type. So, when you are editing text, you can turn off line numbering. Or, when you are coding, you can disable word wrapping. The undo/redo option is unlimited; the find-and-replace tool is quite robust. One of the best features of EditPad Lite is it saves your work automatically to prevent data loss.

PSPad is by far the best app for coders since it brings a slew of development-focused features such as HTML code checker, code explorer, HEX editor, MDI, macro recorder, templates for PHP, HTML, Jscript, Pascal, MySQL, and FTP client. It has a myriad of plugins for advanced users, and quite a few great features for casual folks, such as a spell checker and find and replace.