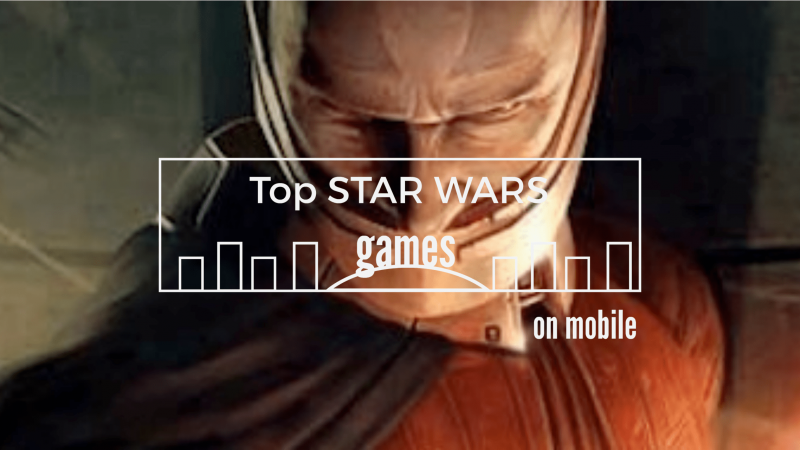 Star Wars The Force Awakens finally hit the theaters worldwide, pulling off another global box office record. The movie, as grand as it is, sure leaves more questions rather than answers what happened to some of our favorite characters. Why was Luke hiding on that mountain instead of aiding the Resistance? What of Master Yoda and Obi Van? But hey, we have all the time in the world to wait for the next episode. Never mind, Disney, take your time to think through how you can explain the miraculous salvation of Captain Phasma from that trash compactor (because Phasma is in Ep. VIII), or what kind of a lousy looser is Kylo Ren if a girl with no training could kick his butt. If, after watching the movie, you feel like your Star Wars itch has not been scratched enough, you could complement that experience with a daily doze of Star Wars mobile guilty pleasure. We have played quite a lot of mobile games here at PocketMeta, and can recommend the following titles to the Star Wars fans.

Star Wars fans are kids at heart, so don’t you say Recon Missions is for the kids. The game is based on an animated series Star Wars Rebels, and besides being a darn good show, the mobile game is a very decent Star Wars game that has lightsabers, quite a slew of the most notable Star Wars species, blasting action and a good deal of gameplay for the money. You can play the initial six or so missions for free to get the taste of it, and then buy the rest of the game that’s divided into mission packs, like Ahsoka pack, Jedi pack, Master pack, Zeb pack and more. You get to fight the Imperial forces wielding your awesome lightsaber against the drones, clones, and soldiers; build your base, train your skills and complete the missions rescuing the citizens. Some freemium games will drain $20-40 from you to grant you a premium character through the random character cards, boxes or shards, but Rebels is affordable, and its IAPs are limited to mission packs and very specific characters, not consumables or random stuff. Highly recommend. 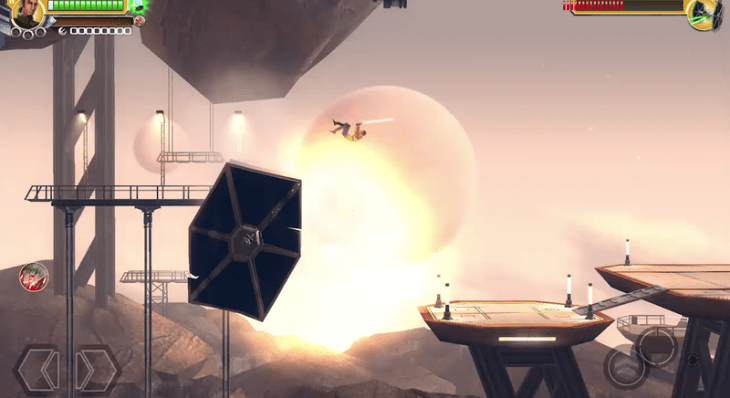 One of the recent additions to the SW franchise is the game from Kabam, and a very good one. It takes place between Return of the Jedi and The Force Awakens, and while our initial complain was that you could not be a Jedi and wield a lightsaber, Kabam listens. One of the latest updates brought a new quest that will let you unlock the epic weapon, as you welcome new characters in the cantina. Here is how it goes. You create your own personalized hero from the four races, and start battling on different planets in an intense platform action, collecting loot, upgrading your hero’s gear and training skills. The RPG elements are quite straightforwards and there are a lot of things to do in the game, including the online co-op. It looks good, has some familiar races from the SW universe, but does not give you enough of the iconic faces. So, if that’s what you’re looking for, check out Galaxy of Heroes. 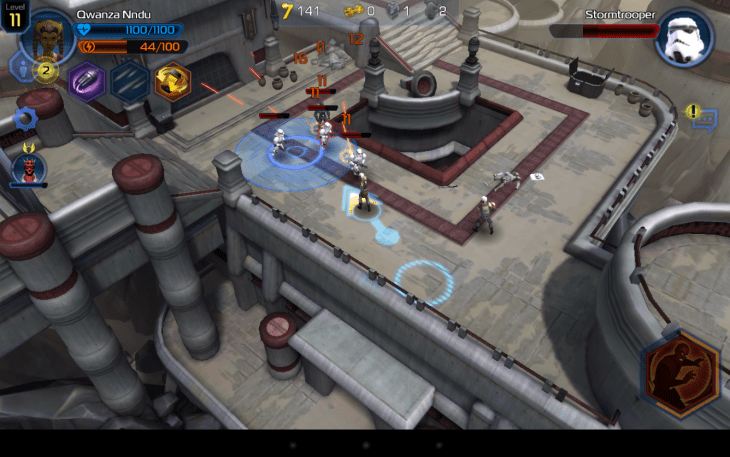 The newest SW game on mobile, Galaxy of Heroes lets you collect some of the most iconic characters, including Luke, Anakin, Obi Van, Darth Vader, Darth Sidious, Luminara, Dooku, Barris Offee, Han Solo, Chewie – a total of 90, with the new additions from the Force Awakens episode, like Rey, Kylo Ren, Captain Phasma, Poe Dameron. Even though the combat is more of a tactic-driven turn-based static tale, the Jedi have the lightsabers and have the Force to heal or kill while the dark side characters have all sorts of nasty powers to counter the Force. What I like about the Galaxy of Heroes is the abundance of races I love so much about the franchise – the Ewok, the Jawa, the bugs and droids, you name it. The game offers a large array of battles in different tables, including the PvP arena. You can have allies and borrow their heroes, use sim tickets to skip the grinding. You can pay to unlock the legendary characters you want, but even if you play without spending a dime you can still form a powerful team of high-tier characters by investing your time and grinding for the character shards. It’s an immense time gobbler, and a fair one. Totally recommend. 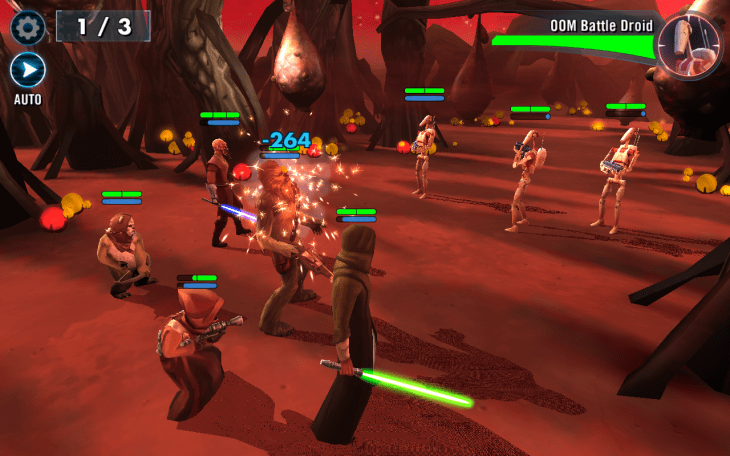 If you are after a premium Star Wars game on mobile, KOTOR is your destination. Even though it’s not the newest release, KOTOR is a true classic that got ported to mobile remarkably well. The controls are fluid, and the game sports the external controllers support. The gameplay itself is smooth, and you get to explore the galaxy before the Jedi fell in battle with Sith. You can choose from nine customizable characters, up your skills and build your lightsaber, ride your Ebon Hawk starship and travel to different worlds of the SW galaxy. The visuals might be a bit outdated, but the gameplay has proved to be one of the best among SW games that has endured the test of time. If in doubt, rest assured The Knights of the Old Republic is totally worth the $10.

By the way, in spring 2015 we heard the rumors that KoTOR II might be ported to mobile since it has been re-rated for the mobile devices by the ESRB, but then the rating got pulled down shortly after appearing. Hopefully, we will hear more about it next year. 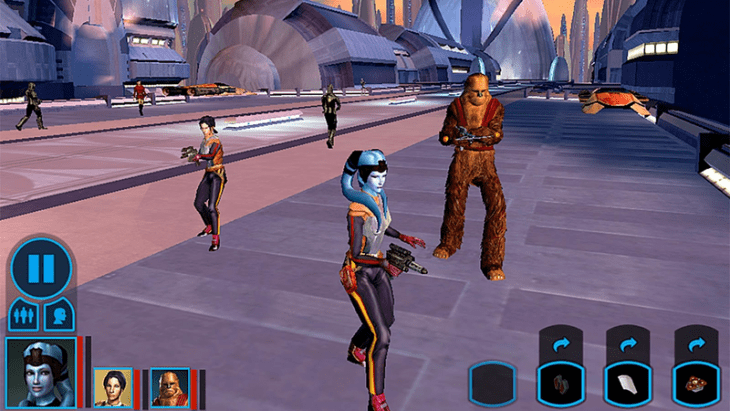 Not my personal favorite, but if you are into tower defense and tower offense, Star Wars Commander has quite a solid gameplay to offer. Chewie and Han Solo will lead the way if you choose to play on the light side, but if the darkness speaks to you, you can as well choose the dark side, train your imperial forces and attack the rebellion’s bases all across the galaxy. Plenty of story missions, leveling up, defending your base and destroying the enemy bases, teaming up with your buddies and enjoy an overall rewarding gameplay. Just don’t spend those crystals during your first days with the game. 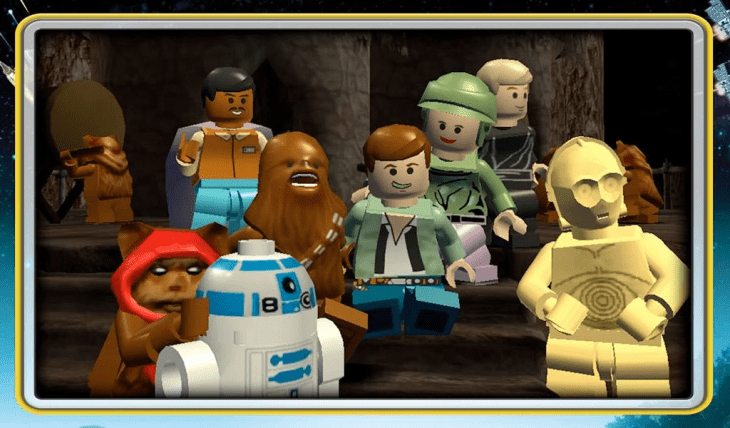 Needless to say, Star Wars Knights of the Old Republic is the best Star Wars game currently available on mobile platforms, with the Rebels Recon Missions following suit. Although some might feel the Rebels game is for the kids, I disagree. The Uprising and the Galaxy of Heroes closely follow the Recon Missions while the Complete Saga sings to those who love the Lego games. The choice seems obvious – if you care for a premium title, choose between the KOTOR or Lego, depending on where your preferences are.

If you care for a free-to-play time killer, we suggest the Galaxy of Heroes or the Uprising, with the former being more balanced in terms of the IAPs and epic character accessibility. The Commander and Galactic Defense are okayish and appeal to the fans of the TD genre while Angry Birds is definitely for the kids. There are also games like the Yoda Chronicles and Force Collection, but while Yoda Chronicles is quite fun if short and lacking depth, the Force Collection is utterly bad. Even The Assault Team was better, but alas, it’s no more. Finally, I know I will never forgive the bad Disney for pulling Star Wars Tiny Death Star from the stores. I loved that game.

Now that you know our top picks, let us know which Star Wars games on mobile have been your favorite lately. Or, share your impressions about the Force Awakens in the comments below! Don’t forget to like, share and follow PocketMeta on social networks and may the Force be with you!