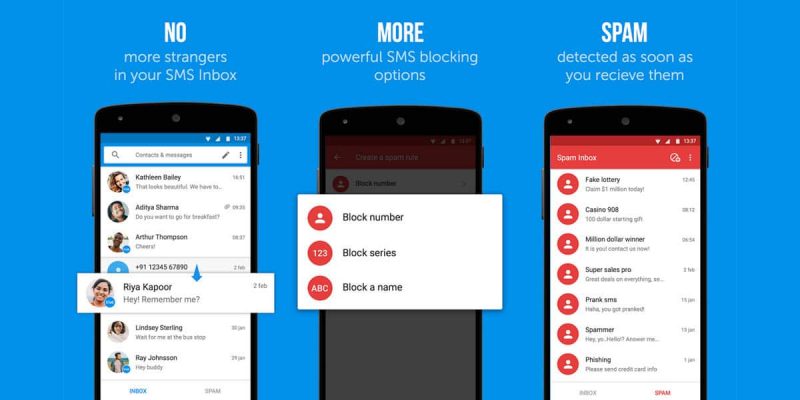 Truecaller, the makers of the popular phone app that gives you complete control and a wealth of information on incoming/outgoing calls used their skills to create a similar service for SMS messaging. The app is called Truemessenger, and it can replace your default SMS app.

Its main purpose is to help users identify SMS senders and block messages sent by unwanted senders, in other words, fighting SMS spam. Also, there’s a built-in report option so anyone can mark senders as spam to help the entire community. Spam rules are customizable, so you can, for example, set spam messages to be stored in a separate folder.

While SMS usage has been decreasing in favor of chat apps like WhatsApp it is still an important service in many areas. In an interview with TechCrunch, Alan Mamedi, Truecaller CEO and co-founder, says:

“It’s great to see more competition in this space, and it verified that we’re working in the right category,” (…)“But now it’s time to fix the messaging experience… SMS has been broken since day one.”

The company says about 15% of all SMS messages is spam – this translates into roughly 1.3 trillion spammy messages on a yearly basis.

Trumessenger is now available only for Indian residents, but it will be rolled out to other markets over the next few weeks. Also, the app was initially launched on Android because the OS allows third party SMS apps, unlike iOS. Even so, Mamedi says they do want to be present “on every platform” and hopes his company will eventually “convince Apple that this is how SMS should work.”

Follow us on Pinterest, Google+, Facebook and Twitter to receive our latest apps & game reviews, news, tips and how tos for Android, iOS and Windows Phone. You’re also welcome to join the Pocketmeta forums for some more app talk!