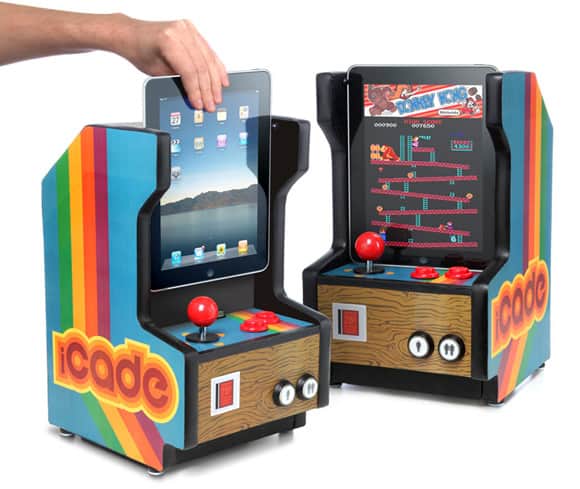 If you miss the days of old, playing video games inside gigantic hard-cover frames in a dark lite room, than this can help rekindle those memories by turning your iPad into your own Arcade .

Anyone who played video games in the 80’s should remember Arcade games quite well, even youngsters today get a glimpse of the arcade era in Movie Theaters and Airports. Although it’s just not the same as walking into a giant dimmed light room filled with arcade gaming machines, and well I can’t help you find your own dimmed light arcade room, I can help you turn your iPad into the ultimate arcade machine.

Arcade gaming has been loved by many for decades now, and because of it, we’ve seen a good spread of arcade remakes and arcade like controllers released for the iPad. Not everyone’s idea of the perfect mini arcade is the same, so I’m going to try and cover a few methods you can rekindle that love for the arcade with your iPad. There’s two main pieces that are involved in converting your iPad into a Arcade machine. The first is hardware, well the touch controls work pretty well for the most part, nothing can replace a joystick and a few large raised buttons. The second piece should be fairly obvious, games. Unless you’re looking to just make your iPad look like an arcade machine and have it up on display, than you’ll definitely need some games, good arcade games.

iCade: This one is probably your quickest avenue to arcade gaming with your iPad and it’s the most popular choice as well. iCade is compatible with over 500 games on the App Store and is generally compatible with appropriate jailbreak apps like emulators. Each of the iCade products has solid controls that feel authentic and responsive. As far as assembly goes, it doesn’t get any easier than iCade, just place your iPad in the slot provided by your iCade device and your done. iCade connects to your device via Bluetooth so you don’t have to worry about messing with any wires either. With all that said, here are your options with iCade.

This one is where it all started and is still remains my favorite piece of arcade hardware. The design gives it that full arcade experience, right down to the little coin slot on the bottom, it’s also the most compatible iCade device at over 500 games. It’s perfect for showing off too, just place this in a open living area and it will attract friends and family like moths to a flame. iCade provides 1 joystick, 8 buttons, and a coin slot, leaving you plenty of controls for just about any game, the cabinet also has enough space to use your iPad in landscape view. Several online retailers sell this hardware generally for $69-$99, you can also purchase it from ION’s website for $99 and a refurbished one for $89. While I was looking around at prices online I did notice some retailers charging up to $129, so make sure you don’t over pay for your hardware. My best advice on where to find one would be Amazon, which at the time of writing this offered them at $69. 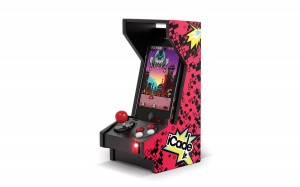 If you’re sporting a iPad Mini and want to turn your device into a arcade center too, don’t worry because ION also sells a smaller version of the iCade called iCade Jr. It supports a smaller size to better fit the iPad Mini and also has the arcade cabinet design, but it only offers 4 buttons instead of 8, and well this is generally enough for most arcade titles, it may leave you just shy for some games. You could rig your iPad Mini into fitting into the larger iCade, but if you can live with 4 buttons instead of 8, this is your better choice. iCade Jr runs at the same price as iCade at $99 retail and $89 for refurbished. 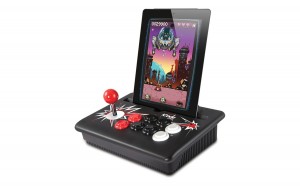 If you’re looking for a more compact version, than the iCade Core is a great option. You don’t get the wonderfully designed arcade boxing, but you still get a awesome control scheme. The smaller frame makes this choice much easier to pack up and take with you, which is a welcomed feature for those on the go a lot. Because of the way the holding mechanism is slotted into the controller, it makes it easy to put any iOS device in there in portrait or landscape view. Here’s the really good news and this just may be a temporary thing, but the product retails at $99 like the others, but many retailers have it on sale for as low as $25. Yes, you can take a minute away from this article to go purchase one quick. 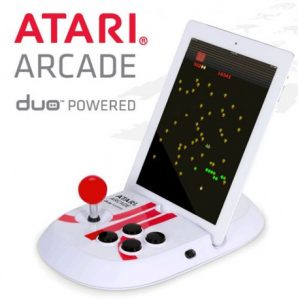 The Atari Arcade is also another option, but it isn’t one of my top choices. It offers supports for 100 games, but it’s counting cheap spin-offs for games. An example would be supporting a popular title like centipede and than 3 other versions of centipede. I haven’t seen too many games that support this type of hardware other than those in the Atari collection, but on the plus side you can buy the Atari collection for just $10, which is a pretty decent deal even with all the spin-offs. The Atari Arcade is priced at $60 retail, so you’re looking at $70 for the controller and the 100 games. Not a bad route to go, if you’re looking to focus more on the Atari age of gaming. 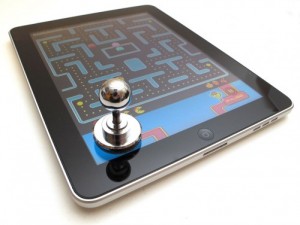 Joystick-It is more of a notable entry, it doesn’t provide a complete arcade experience like the others, but it is a good way to use a joystick on your device. It uses a suction-cup to stick your iPad and has a special material on the bottom that acts like your finger. It works great for games that use virtual joysticks, but it can experience issues with games that allow the joystick to reach further to increase speed. These little joysticks run around $10, so they’re a cost effective solution. 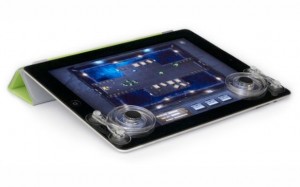 Fling Joystick works just like Joystick-It, but rather than the taller joystick, it uses a flat joystick like the ones used on the Sony PSP. I personally like this a little better, because it doesn’t intrude on your vision as much as a Joystick. You can find them at many online retailers including Amazon for just a few bucks. 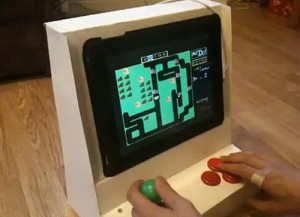 If none of the above choices really tickle your fancy and you’re good with your hands, you could consider building your own arcade cabinet. If you’re not good with wiring and chipsets, you can also purchase any iOS controller, gut it, and just make the cabinet part yourself. This is personally what I would like to do in the future using the iCade Core controls, if it ever happens I’ll be sure to post a guide to building your own as well.

So what good are any of these without some games to play with? Not much unless you’re looking just to show off your cool iPad accessories that you never actually use. If you decided to go with the Atari Arcade, than you’re probably limited to the 100 games offered by Atari, though there is some support out there with a few other apps. If you’re using a iCade device, than your options are much larger. You can check out the complete compatibility list on ION’s website here. Otherwise, here are some of our favorite options to obtaining a arcade collection. 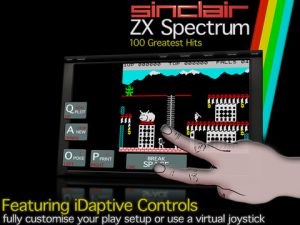 It’s available on the App Store for $12.99 for the HD version and $8.99 for the regular version. This includes 100 games from the 80’s and 90’s that all support the iCade controller. If you just got your arcade cabinet, this is a quick way to bolster your collection of games. 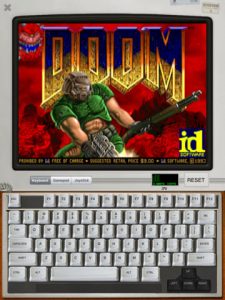 This is one of my favorite apps for iOS, with or without the arcade controls. It’s a MS-DOS emulator that comes with games like Commander Keen and Doom. To be honest though, the games included isn’t what makes this such a awesome app for arcade gaming, it’s the hidden use that Apple certainly hasn’t picked up on yet. Because the App is basically just running MS-DOS, if you have a jailbroken device, you can install any MS-DOS game with Aemula Oldies. That’s right, you can play games like Warcraft Humans & Orcs and Fallout on your iPad, you can even install Windows 98 on your iPad if you wanted. Awesome? I know. Did I also mention that it’s free on the App Store? Make sure and check this one out. 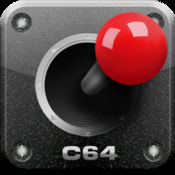 The Commodore 64 was one of the biggest contributes to bringing computers into the every day home, because of its huge success back in the day, many are familar with the gaming line-up that was offered on the system. The app costs $4.99 and offers several games along with in app purchases for additional games. 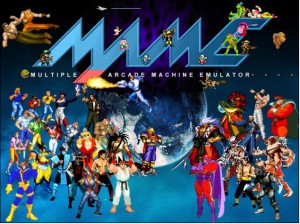 This is where the real arcade meat lies, unfortunately you do need to have a jailbroken device. There was a app on the App Store called Grindlee, that allowed you to load arcade ROMs, but it was recently taken down. iMame4all is available on the BigBoss repo in Cydia and is free to download. It doesn’t include any games and I can’t really tell you where to get them, but believe me they’re out there. It provides support for nearly every classic arcade game, from the Old space Invaders to The Simpsons Arcade. If you’re looking for the full arcade experience with real arcade games to play, this is your best option.

There you have it, now all you need is to find a nice dark place to play and to turn on some Arcade Ambiance sounds to give you the complete arcade experience. Which by the way, if you’re serious about creating this atmosphere, I would suggest checking out the Arcade Ambiance Project here, it has hours upon hours of arcade ambiance noise to play in the background. If you know of any other great ways to turn your iPad into a arcade machine, please be sure to post them below, as well as any questions or comments you may have.