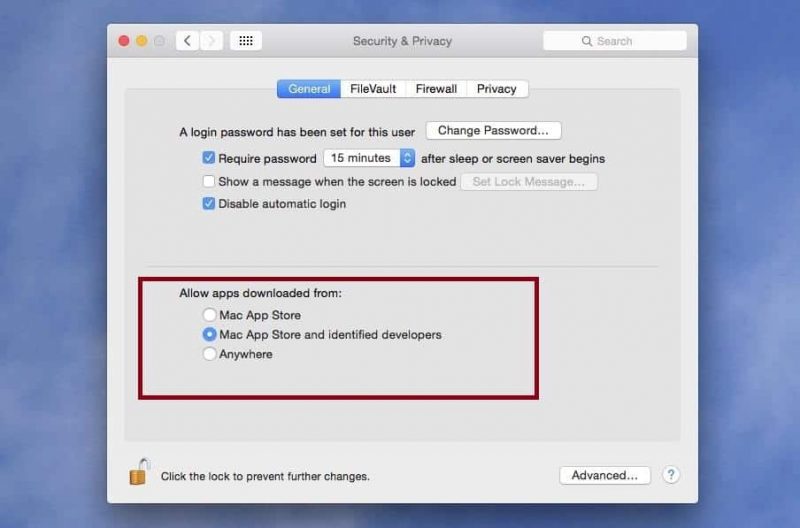 The Mac App Store provides a safe haven where developers can upload their apps and users can manage everything in a safe, up-to-date environment without worrying about external troubles. The key difference with the mobile counterpart, however, is that OS X users are not actually restricted to the official store and can install apps from whatever source they want. Of course, Apple wants to protect its users in one way or the other, even if they choose to install apps from unidentified developers and third-party sources. Since OS X Lion, the operating system has had a feature called Gatekeeper which tries to live up to its name by blocking unknown third-party apps, until you are certain that they are safe.

Gatekeeper has a variety of configurations which make it work in different ways. To find out more about your own settings, open System Preferences and go to Security & Privacy. In the bottom of the general tab, you will find three different options:

When you attempt to launch an app, a Gatekeeper message might pop up and its contents will depend on the option you have chosen from above. The only message that is consistent across all three settings is the one that talks about damaged apps. This happens when your system detects that the app was altered by someone/something other than the original developer. Since the app has been inappropriately tampered with, you should dispose it and find it from another source unless you are absolutely certain that it is safe.

When Gatekeeper blocks an app from running, you have a couple of options on how to proceed.

Gatekeeper is there to warn you about threats, prevent you from making silly mistakes in a hurry, and generally try and maintain a safe environment for you to navigate in. The security utility is not there to control your Mac or the way you use it, however, so bypassing its restrictions is far easier than you might think. In fact, all you have to do is Ctrl + Click or Right-click on an app you want to open (in the Finder), select the “Open” option and then click on the Open button to finally launch it. Depending on your settings, you might also need to enter your user credentials. That is pretty much all there is to it as you are basically telling your Mac that you know about its warnings and you wish to proceed anyway.

When Gatekeeper blocks you from opening an app, its duties do not end there. After closing the popup message saying that you cannot open a certain item, head over to the Security & Privacy menu that we talked about before. The app that was blocked before should be found at the very bottom of the General tab as proof that Gatekeeper is doing its job. Most interestingly, clicking on the “Open Anyway” button will tell the system that you trust the app so you will be allowed to open it at any point after that.