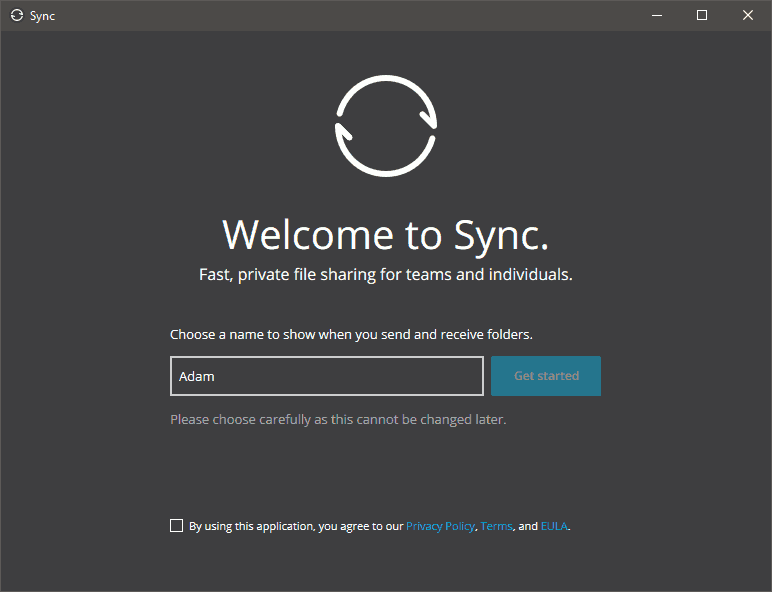 The increasing popularity of cloud storage services is undeniable and services like Google Drive, OneDrive, Dropbox, and Box are now hosting unbelievable amounts of data from millions of users. The main reason why these services have become so popular is that they are incredibly convenient as they allow users to access their files from any device, wherever they are. One thing these services do not account for, however, is privacy and security. And if those two areas are what you are mostly interested in, BitTorrent Sync might be a better alternative. Downloads to other platforms are also available from the official site.

BitTorrent Sync: Why should you use it?

Those of you who are already familiar with cloud-storage services need to understand that BitTorrent Sync works in a much different way. The main difference, which also happens to be the reason why some people prefer to use Sync, is that the service uses peer-to-peer (P2P) technology in order to sync and share your files across multiple devices instead of hosting the data on third-party servers.

Allow me to elaborate with a simple demonstration using Sync and Google Drive. When you upload a file to Drive, Google grabs it from your computer, uploads it to its servers and then syncs it on the cloud without any form of encryption. This means that malicious individuals can gain access to these files, though most people need not worry about attacks of this scale. In contrast, Sync automatically encrypts that file and then sends it over to other devices only when you specify so. The other device or other user also needs to be approved by you before they can even read the files as the encryption makes them useless otherwise. 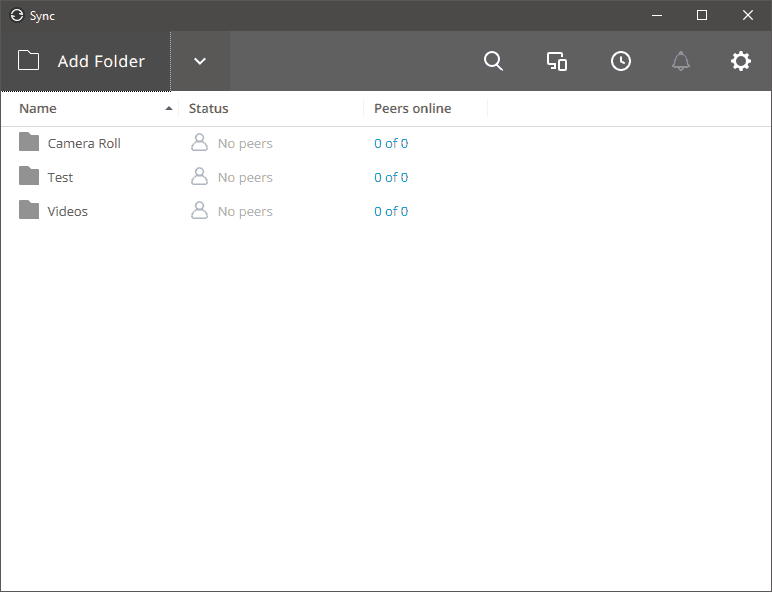 So while you can just drag and drop a file into Dropbox and instantly make it available in other devices, Sync requires a more involved process. Of course, the added security is what makes it worth your while, especially when you want to share sensitive information including pictures. Furthermore, Sync has no size limits as it does not store your data in its servers. Instead, you are only limited by your own hard drive. Finally, sharing large files is much easier with Sync, especially over a local network because the service can also work offline via LAN.

Since we cannot really go over every single feature of Sync, I would suggest visiting the official Features Spotlight page and perusing list at your leisure.

Presuming that you have decided to give Sync a try, go ahead and download it from one of the links above. The installation process is very straightforward though keep in mind that Sync will automatically run with Windows unless you disable the setting in the setup wizard or in the app’s preferences. Once you have installed the app, run it and provide it with your name. Choose carefully as you cannot change it later.

You should now be facing the main Sync UI which will be completely empty since this is your first time using it. There is no need to set up any other options as you can instantly start adding folders and sharing them with others. To begin with, click on the downwards-pointing arrow next to the “Add Folder” button and you will see three different folder options. 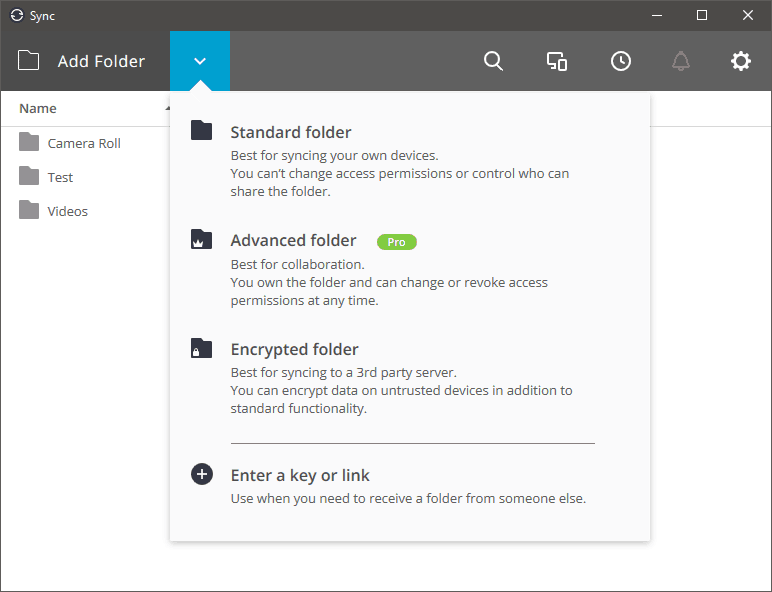 Start by adding a standard folder so that you can become familiar with the process. After choosing a folder from your PC, Sync will automatically open the Share menu where you will have a variety of different options depending on what you want to do with the files. Permissions are primarily divided into “Read Only” and “Read & Write” or “RO” and “RW” for short. 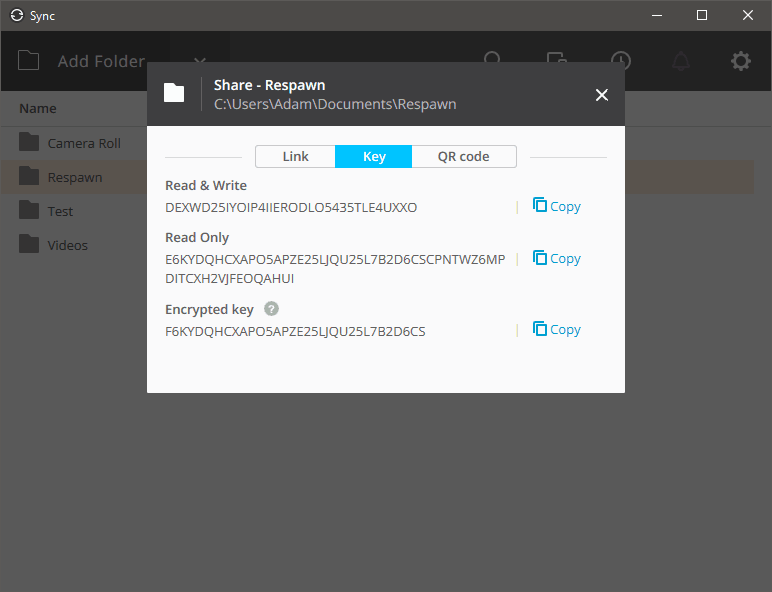 Devices/users with RO permissions can only view your files and not modify them in any way. On the other hand, devices and users with RW permissions can both access and modify your files/folders. You can share links by email, by copying/pasting them, and by a QR code in case you have the Sync app installed in your mobile device. 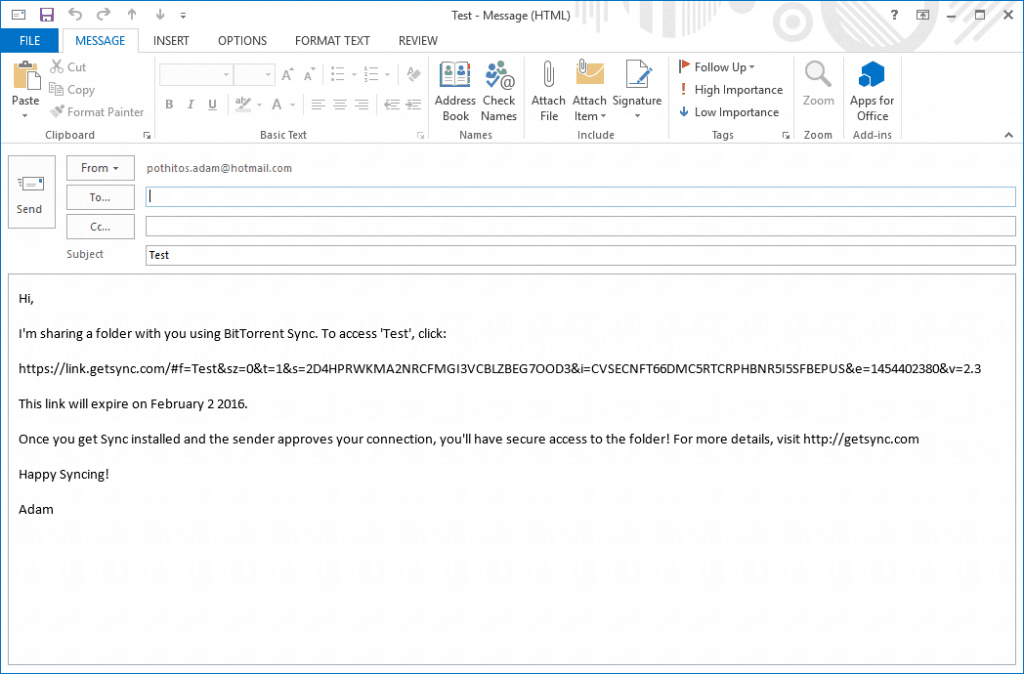 To share a folder with someone, they need to have the Sync app installed in their devices as well though users who do not have Sync installed will be prompted to do so anyway. When the other person opens that link, you will get a notification in your Sync asking you to approve. The other users will not be able to access the files until the moment you approve of the sharing. 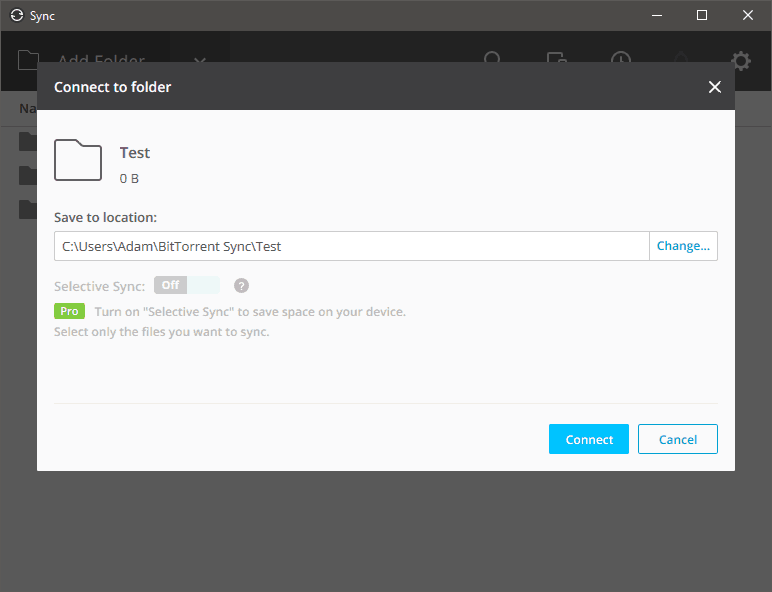 Which brings us to the concept of peers. In short, peers are the users and devices that you have entrusted with your folders. By default, Sync will automatically add users to a list and when you attempt to share another folder with them, they only need the new key in order to access it. However, you can change the settings so that all peers need to be approved. To do that, click on the “New peers” link in the Security section of the Share menu and choose “All peers” instead. The other two settings are also configurable and they let you choose when the link will expire and how many times it can be used. This is useful when you want to share a folder with two people at the same time as you do not need to generate a second link but this option is less secure for obvious reasons.

I think by now we have established the fact that Sync is not a cloud storage service. However, that does not mean it cannot be used like one, under the right circumstances. The first thing you should remember about Sync is that its name is enough to describe its functionality. In order to share files with Sync, the original device needs to be turned on until all the files have been properly synced or shared, if you will. This is also true for transfers over a local network, not just over an Internet connection.

This happens because the files are transferred to the secondary device in their entirety as nothing is hosted on the cloud. So when the syncing is finished, you can go ahead and turn off the original device and you will still be able to access all of the synced files. This is extremely useful for a variety of situations, especially when you use Sync on your mobile device as well.

For instance, you can add a folder that contains all of your family’s pictures and sync it with family members that reside in other regions of the world so you can all share your photos instantly and securely in one neat folder. Furthermore, you can add a folder that contains your music and then sync it with your Android or iOS device so that you can have access to your music library with no additional setup. It should be said that you will probably need a third-party media player, at least in iOS, otherwise your phone might not pick up the extra media files.

On a final note, BitTorrent sync can use quite a lot of bandwidth, especially when you are sharing large files. If you do not want to mess up your Internet connection, I would suggest heading over to the Advanced Preferences and setting limits to the receiving and sending rates before you actually start sharing folders with others. 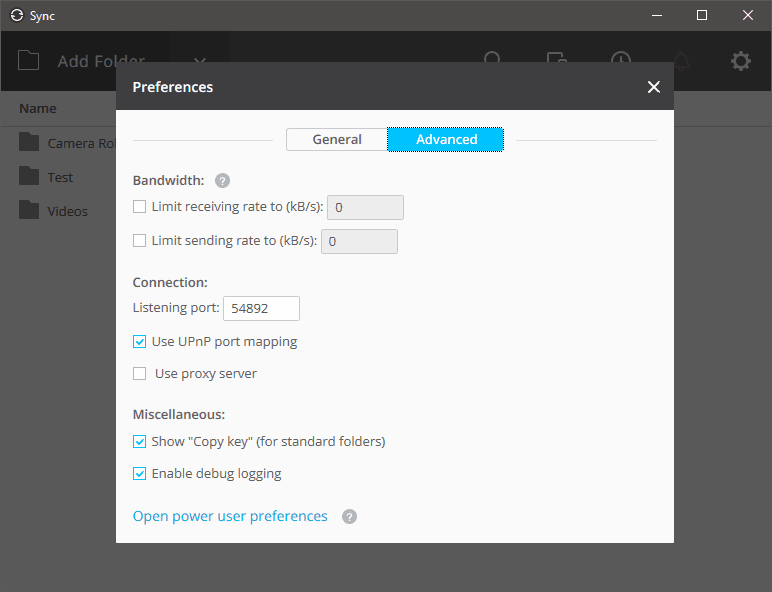