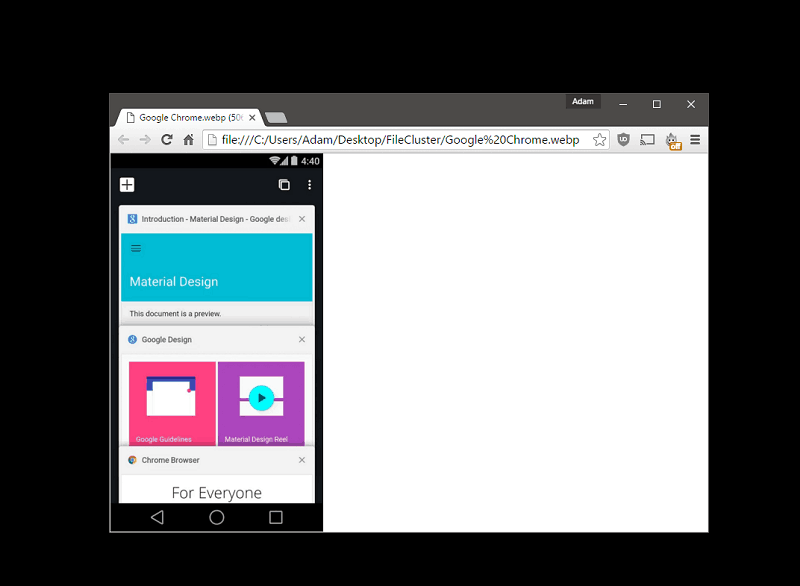 Anyone who frequently downloads pictures on Chrome, especially around Google’s websites, has probably come across an image format called WebP. Unfortunately for most Windows users, the default image viewers have no idea what to do with WebP files so you can only open them in Chrome as if you opened them in a new tab. Today we will take a look at the history and usage of the format, how to view the images in your PC and how you can convert them to more popular formats so you can use them anywhere.

An introduction to WebP

This particular format was created by Google specifically for the purpose of reducing the size of images and make websites faster and lighter. The company says that WebP images are up to 26% smaller in size than PNG images and up to 34% smaller than JPG. Google’s own services, like the Play Store, all feature WebP images when you are browsing from Chrome though they display standard images from other browsers like Firefox and Safari. Whether the format will become more popular in the future or not remains to be seen but Google’s performance reports definitely indicate that the company will keep on pushing for WebP images, even if they are only available at its own websites. 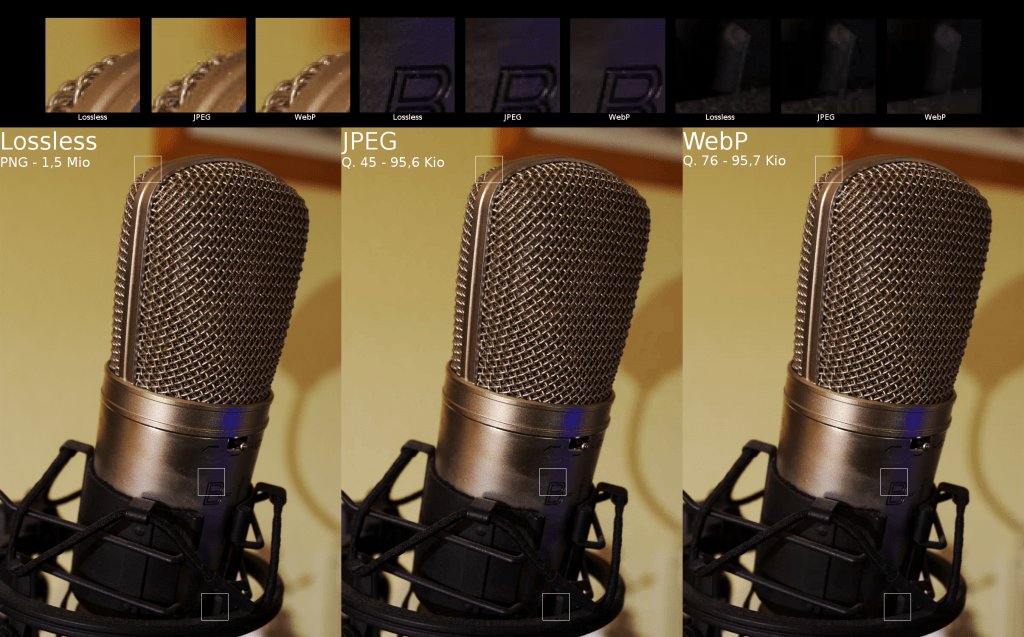 Before we continue, I would like to make one thing clear again. Using any other browser outside the Chromium project is the simplest way of avoiding WebP images, at least for now. So if you use Chrome along with a second browser, just visit websites that host WebP images with the other browser and they will be saved in the aforementioned PNG or JPG formats.

Though neither ‘Photos’ nor ‘Windows Photo Viewer’ natively support the WebP format, there is a codec available for the latter app that enables it to view WebP images like any other. You can download the Google-developed WebP Codec and install it in your computer like a normal application. After the installation is over, WebP formats will be instantly supported by Windows Photo Viewer. If you are on Windows 10, check out our guide on turning Windows Photo Viewer into the default image viewer. 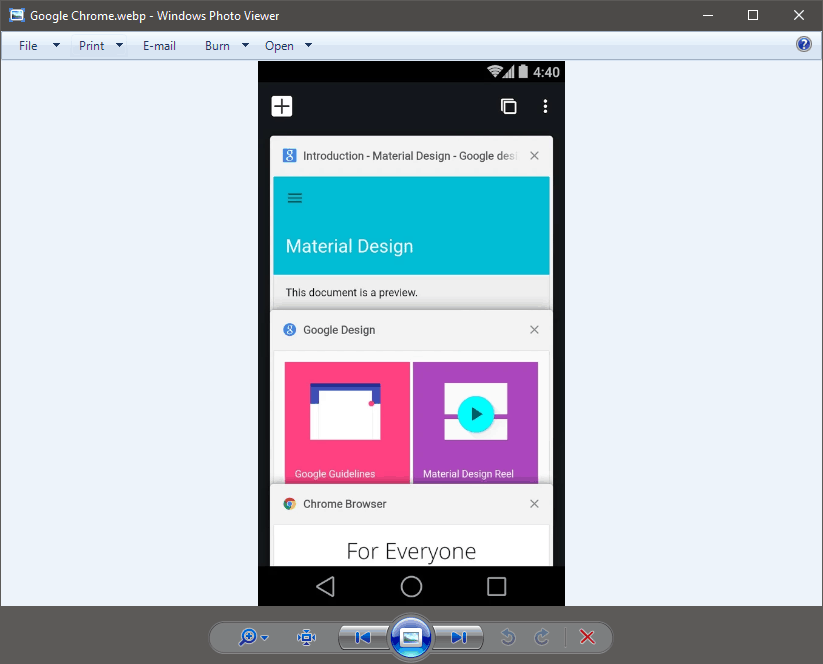 Unfortunately, not everyone has access to the Photo Viewer because Microsoft has removed it from fresh Windows 10 installations. In those cases, the only thing you can do is turn to a third-party image viewer like XnView, FastPictureViewer or even Google’s Picasa. There are lot more apps that support WebP, either natively or through plug-ins, so finding one you like will not be that hard.

Converting WebP to other formats

There are quite a few converters out there but for the purposes of this post I will be using XnConvert, a lightweight and free app that works fantastically for WebP images. The application is available in standard and portable versions, both of which work in the exact same way.

Once you get the app, launch it and drop your WebP images in its window. Then, go to the Output tab and select the conversion format from the dropdown menu. You can also change the output filename in the respective field. The {Filename} option will keep the exact same name in both files though there will be no conflict because of their different extensions. When you are done with the settings, click on the Convert button and your images will be almost instantly converted to the new format. XnConvert is incredibly fast so even multiple images will need no longer than a few seconds. 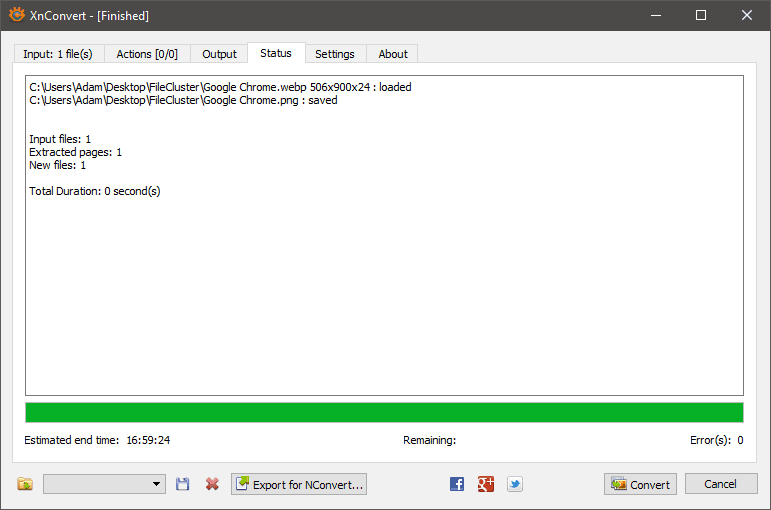 Online converters like Zamzar are also available but they all require you to enter an email address so that the converted files can be sent to you there. This route is easier for those who just want to convert a couple of images without bothering with an extra app but when there are privacy issues at stake, I would recommend steering away from such services.

Using an extension to automatically download WebP as PNG 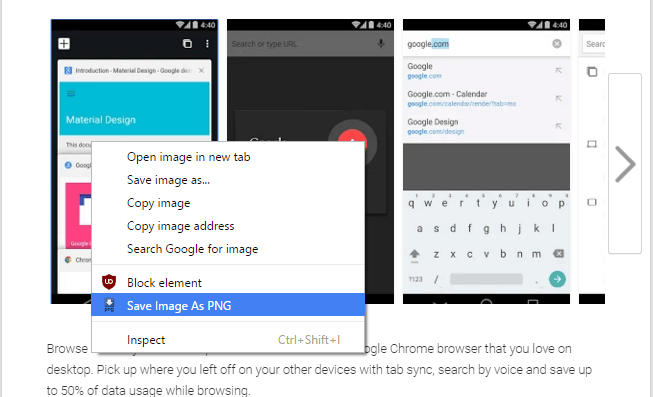 If you are set on using Google Chrome but still want to avoid the WebP format, the Save Image As PNG extension may be exactly what you have been looking for. After adding it to Chrome, the extension will simply add another option to your context menu that will let you save any WebP image to PNG instantly as it converts them on the spot. The extension is quite lightweight as it only really uses resources while it is converting the images.