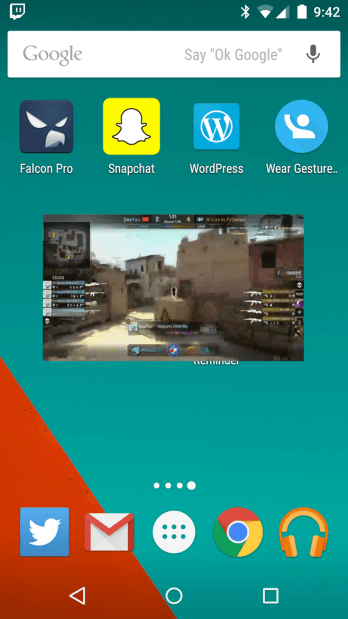 The latest update for Twitch consists of a single feature (well…there may be some unmentioned bug fixes in there), but one that’s worthy of attention. The Android app now lets users view live stream anywhere on their device – this means even outside the app.

This is usually known as “picture in picture” but Twitch named it “Pop Out”. The stream can be displayed in a small viewer on top of what your screen is already showing. For some time now, Twitch was already allowing users to watch streams as they were browsing the app. Think of the new Pop Out feature as an extension to the already existing function.

To access the pop-out player, all you have to do is tap on the gear icon, in any stream’s video player, scroll down and tap once more on Pop Out. This makes the player remain on the screen regardless what other things are open in the background. Of course, you can easily move and resize the player should it cover anything important.

Twitter also has a similar mini-player included in its app, with the difference that this one is also able to stream SoundCloud content that’s shared within the app. For now, iOS doesn’t support such functionality but iOS 9 will introduce the picture-in-picture capability, when it becomes available this fall.

You can get the latest update for Twitch from its Play Store page or download the APK from APKMirror.