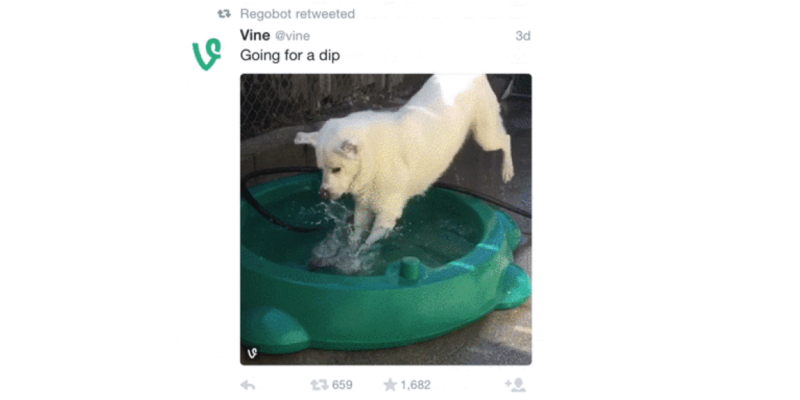 Twitter has been testing the auto-play function for some time now and today it finally went live. Joining other major social networks (starting with Facebook), you will now see native Twitter videos, GIFs and Vines auto-playing in your feed, as long as you’re viewing it on iOS or the web. Android users, don’t think you’re of the hook – whether you like it or not – you’ll get the auto-play function as well, sometime in the near future, according to the official announcement.

Videos automatically play while muted – if you want sound, you’re going to have to play it in full-screen.  It looks like the company finally realized users are much more engaged this way.

“We have learned just showing a thumbnail with a play button isn’t enough to entice consumers” to watch, said Adam Bain, Twitter’s president of revenue and partnerships to The Wall Street Journal. “Consumers preferred this video viewing experience on Twitter more than any other experience.”, he added.

If the thought of auto-playing videos annoys you, at least now you know: it’s the rest of the people you should be blaming. There’s also the bandwidth issue, but Twitter did find a workaround that will prevent their latest feature from making you reach your monthly cap on your mobile data plan, by simply spending too much time on the 140-character messaging service.

The feature can be disabled while you’re not connected to WiFi, or even completely, so you can avoid it, if that is what you wish. Also, videos won’t automatically play if your connection is slow or incredibly expensive.

With that said, Twitter’s latest initiative is about more than simply keeping users engaged. It’s about tapping into the endless stream of video advertising, and getting a much needed boost in ad revenue. And they really thought things through.

These days, ad marketers are reluctant to pay for video ads which are shown on areas of web pages that are rarely seen by visitors. Twitter states they’ll charge advertisers only after the entire video has been in view for at least 3 seconds. To make sure of this, Twitter hired Moat, an independent measuring company, to establish how vieweable their video ads are.

Other prominent names in the industry like Google and Facebook are testing their viewability rates using their own software, although this often displeases advertisers, as most of them prefer to get this kind of assessment from independent companies.

What do you think of Twitter’s new auto-play feature? Is it something you’re excited to try or you were just about to head over to your account’s Settings and disable it?