The iPhone X has a new security feature called Face ID that aims to take facial recognizing to the next level. We’re going to show you how to use Face ID on the iPhone X but also how this feature works and why it’s worth using.

You might be aware that Face ID seems to have failed the Apple exec Craig Federighi during the demo, but Apple sais it was actually a security feature and not an error. The problem was caused by too many people handling the demo device before Federighi and Face ID was locked out because it exceeded the bad-match limit.

How does Face ID work?

Face ID creates a digital 3D fingerprint of your face using 30,000 points of infrared light which will serve for comparison every time you try to unlock your device with using facial recognition.

To make the phone scan your face you will need to either tap the sleep/wake button or use rise to wake. Then, you will need to look at the phone. According to Apple, you can even wear sunglasses but your eyes need to be open. They also say that Face ID doesn’t work unless you’re looking at the phone attentively (I translate that to “staring”) so if you’re doing something else on the lock screen or looking away, it won’t trigger Face ID.

Interestingly, Face ID even works in dark rooms and other poor lit environments even though the feature doesn’t emit any visible light (as you might have seen during their demo slides).

Since infrared reflects off real skin in a different way compared to any other inanimate material you can’t fool Face ID with photos, plaster models and other ways people have used to trick similar security systems. Not to say someone might not be able to find a way to fool Face ID at some point, but it’s certainly not something that could be achieved by anyone and we’re not there yet.

In case you’re wondering, you can’t set up Face ID so that it unlocks the same device using multiple faces. At least for now, it can only recognize one face.

How to use Face ID on the iPhone X

At last, lets see how you can use Face ID on the iPhone X – hopefully, you now have a general idea how this feature works. 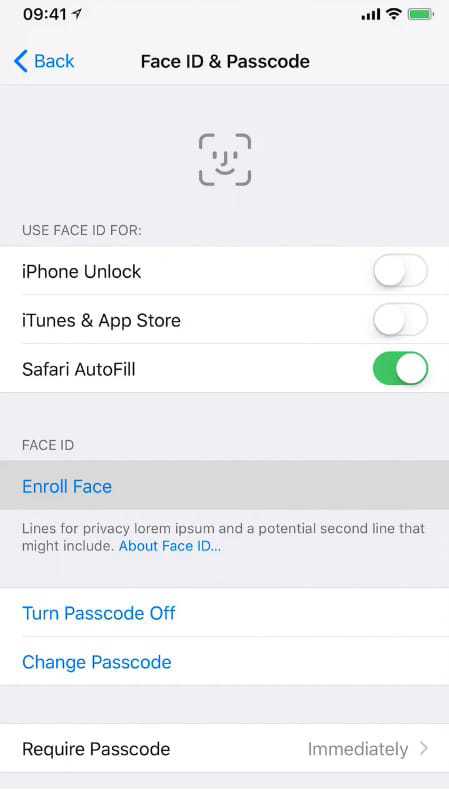 Open the Settings app and go to Face ID & Passcode -> Enroll Face, then select “Get Started”.

Now, your iPhone will use the front-facing camera as an infrared sensor and your face will be displayed surrounded by a circle. You will need to move your head in a circular pattern so Face ID can capture all your facial characteristics.

If you take a look at the Face ID preferences screen shown above, you’ll notice it you can set it to be used for unlocking the device, Safari autofill, and iTunes & the App Store.

To unlock your iPhone X with Face ID you must first wake the screen by using the raise to wake feature (you can enable it in Settings -> Display & Brightness -> Raise) or by pressing the side button.

Then, you will need to look at the screen – keep in mind your eyes need to be wide open. That’s it!

How to disable Face ID on the iPhone X

If you ever need to disable Face ID, there are several ways to do it. Firstly, you do it from Settings -> Face ID & Passcode, or by turning off and restarting your iPhone X.

Face ID will also be disabled after five failed unlock attempts or by pressing the wake/sleep button five times in a row. Finally, you can press and hold the wake/sleep button and one of the volume buttons (it doesn’t matter which one) – this will bring up a power-down screen and also disable Face ID.

Have you tested Face ID yet and do you prefer it over Touch ID and other security methods? Share your experience in the comments section!