If you’ve ever been using a laptop away from your desk and you’ve experienced the ever so productive multi-display with multiple monitors, then it’s probably a drag using a single laptop screen. No need to worry, we’ve got your back with a solution to use your iPad as a second monitor for PC or Mac.

I spent nearly the entire year traveling around the country week after week, living in hotels, and sitting in a airplanes. If only I knew that the iPad in my bag had the capability to become a second screen for my laptop. This is accomplished by using a application called Air Display, which is available on both PC and Mac. You’ll also need to purchase the app from the AppStore, which it’s currently listed as $9.99. I believe in order to run the application on OS X is it more pricey than the PC version and many have complained that the application is not worth the price. That’s really up-to the specific user to decide, because if you’re like me and you spend a lot of time away from the desk, something like this can come in extremely handy. Not to mention if you’re traveling for work you could probably even expense the App all together. With all that said, let’s get to the how-to portion of this guide.

First, download the Air Display app for your device, which can be found on the AppStore. Once you’ve purchased the app, go to http://getairdisplay.com/ and download the Host Software. This is the application side for your PC or Mac. Install the host software, which should prompt for a restart on your machine once the installation has completed. After the reboot you should now have a Air Display icon in your task tray (PC) or on the right side menu bar at the top (Mac) You should see a icon that displays something like this with the host software. 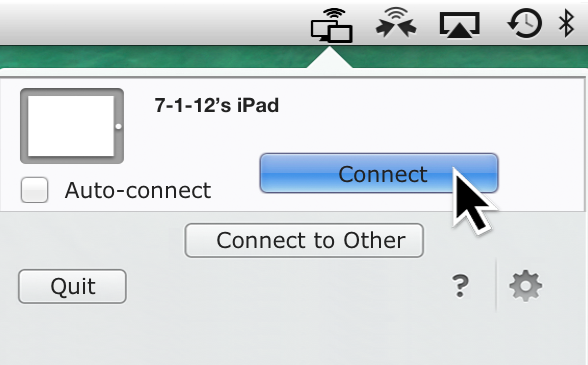 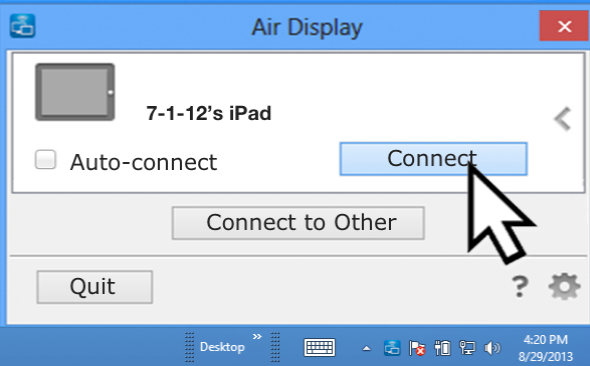 If you don’t see your device, make sure that it is properly hooked up through your wireless network. (I’ll get into how you can use this app without being on a Wi-Fi later) If you don’t see your device on the list once it’s properly connected to the local network, you can either try to reboot your mobile device and PC or enter the IP address given on the AirDisplay app manually.

Once you’ve successfully connected your device to your PC or Mac, you’ll be able to go into the OS’s display options and the device will show as if you hooked up an additional monitor. From the display settings you will be able to position the screen of the iPad so that your cursor is able to seamlessly move from one screen to the other. There’s also a few settings that you can access from the Air Display host software. Most are self explanatory, but keep in mind when you use the Retina resolution the screen is going to be extremely small and somewhat difficult to see. I’m expecting this issue to be resolved when the 12.9” iPad is released. This issue is apparently resolved when using a Mac Book Pro which is able to take full advantage of the Retina Display. 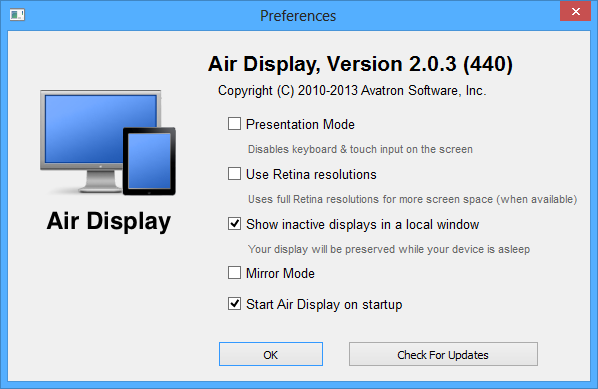 The speed of the application really depends on your network speed. Even on my network I noticed a fair amount of latency when moving entire windows from one screen to another. Because this it limits the functionality somewhat, here are a few ideas of how to get the most functionality and productivity out of the app. In my first example I used the second display on my iPad to hold all of the tool bars from Photoshop, once the windows have been moved to the iPad screen there is little to no latency making it extremely useful for designers. 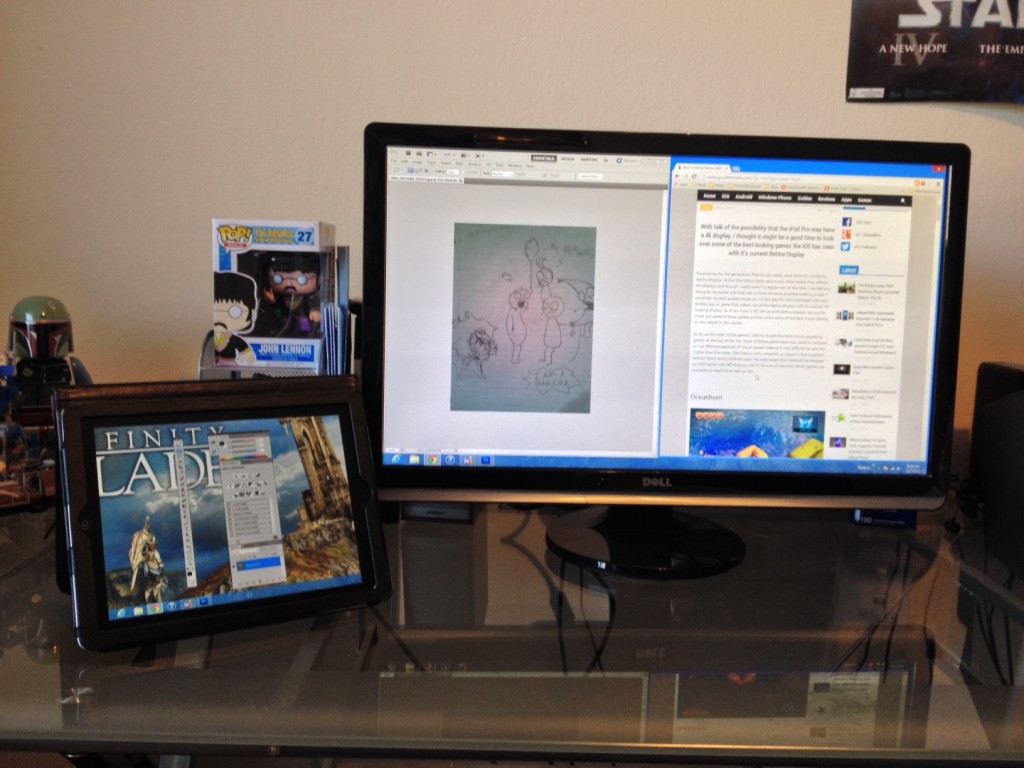 The second useful setup I had, was to have my PHP editor opened on my main display and a preview of the page on my iPad. If you’ve ever worked with code you’d know exactly how useful it is to have a preview of your project while you’re tearing away at the guts of its code. 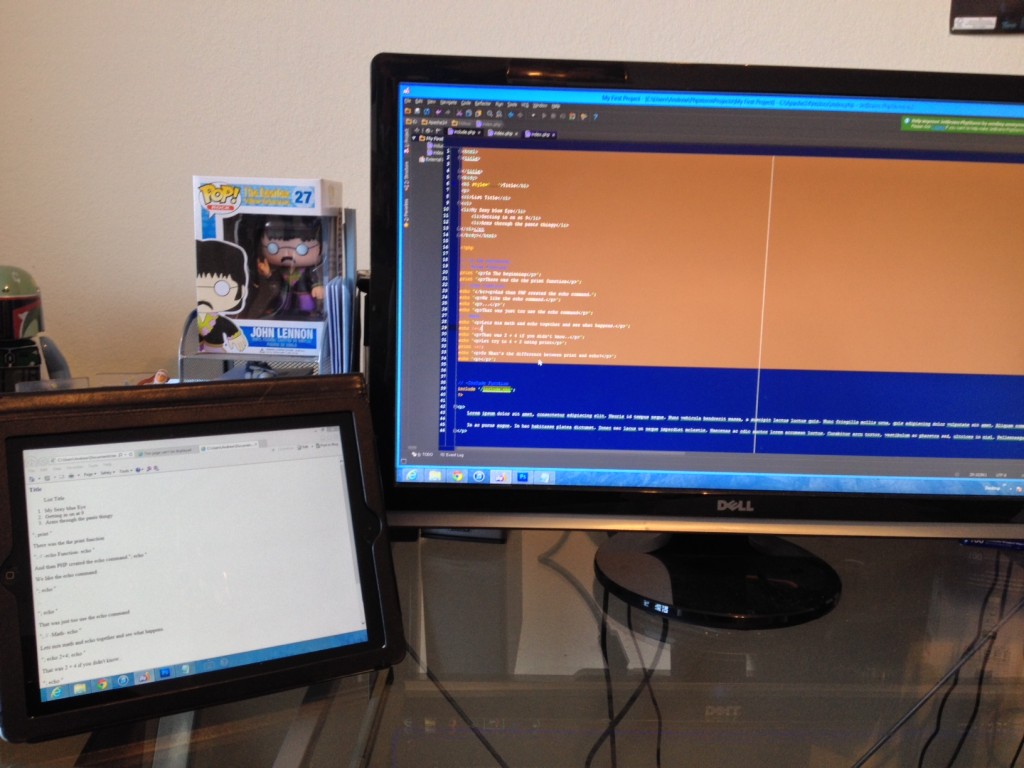 Now if you want to use your iPad as a second monitor with Air Display and you don’t have access to a network you can connect the two together by either using a app called MiFi which is a jailbreak app that allows your iPad to broadcast itself as a WiFi device. Don’t have a jailbreak device? Most laptops today have the ability to set up a Ad-Hoc network, which does practically the same thing that MiFi, just from the other end. To be completely honest, if you’re going to use this app, I would suggest using either MiFi or setting up a Ad-Hoc connection. I experienced hardly if any latency working between the two screens while running on a Ad-Hoc network.

As always, let me know what you think in the comment section. I’d also like to hear what your ideas would be on making this a useful second monitor.