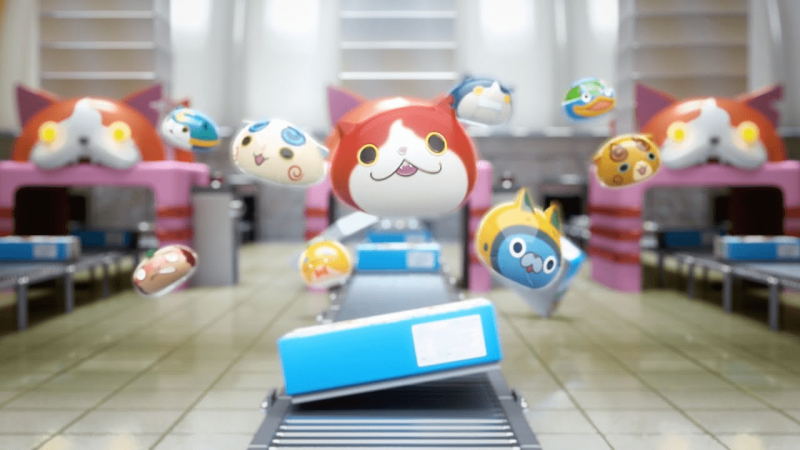 Yo-Kai Watch Wibble Wobble mobile game launched some two weeks ago on iOS and Android for the USA and a few other Western countries while it has been a major hit in Japan for the past six months. The game may seem simplistic at first sight, but this misconception could not be further from the truth. Yo-Kai Watch Wibble Wobble is a black hole to your life, because it sucks you in and leaves nothing but the fever to collect rare Yo-Kai, or obtain them from fusion. This Yo-Kai Watch Wibble Wobble Guide will help the beginning players get the basics out of the way. Without further ado, let’s roll.

This aspect of the game is one of the most confusing, as if dozens of Yo-Kai names isn’t. The tricky thing about assembling your party is there is a multitude of ways you can do that. When you are in your Yo-Kai management panel, you can sort them by attack, HP, rarity, and many other criteria.

What is not self-evident from the start, is the seven tribes of Yo-Kai are involved in the relationships of compatibility and incompatibility. The following image demonstrates how the tribes work together, and which tribes are compatible, which are incompatible.

It’s pretty mind-bending why it’s not embedded in the stats system that would tell you right off the bat when you assemble a party that some Yo-Kai in your team are in conflict. Alas, the devs want you to learn the tribes by heart. Or use the image. 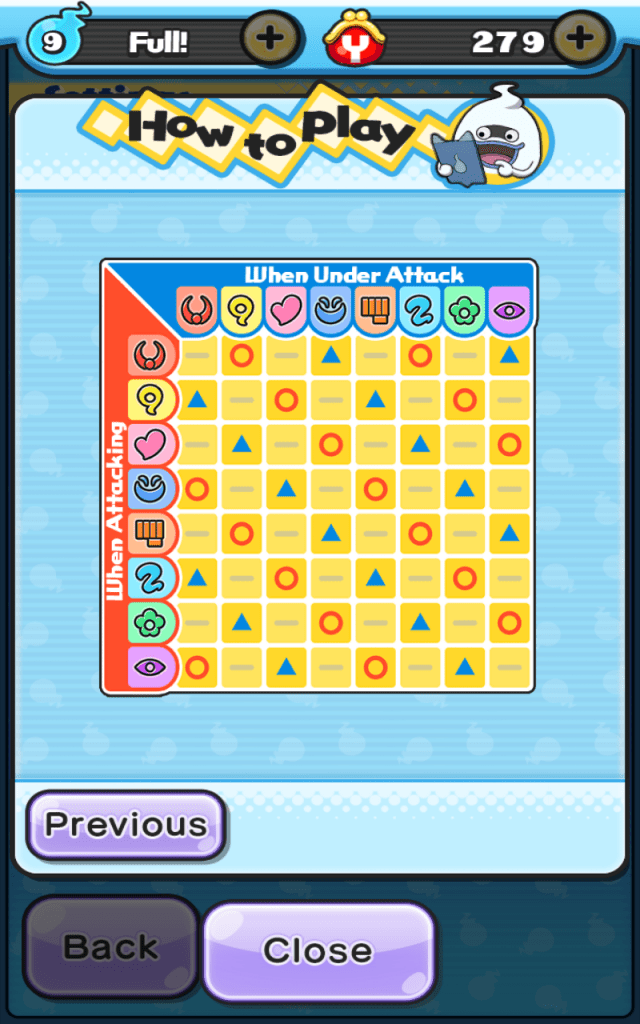 Another way of making a party is to have Yo-Kai of one tribe aboard. This did not work out for me very well. Your mileage may vary.

The best strategy that worked out for me thus far is to fuse the lower-rate Yo-Kai to make A and B class Yo-Kai, and just throw the top of the crop into a party. While other methods may work, or may not work depending on the enemy, the higher-tier Yo-Kai make a huge difference. 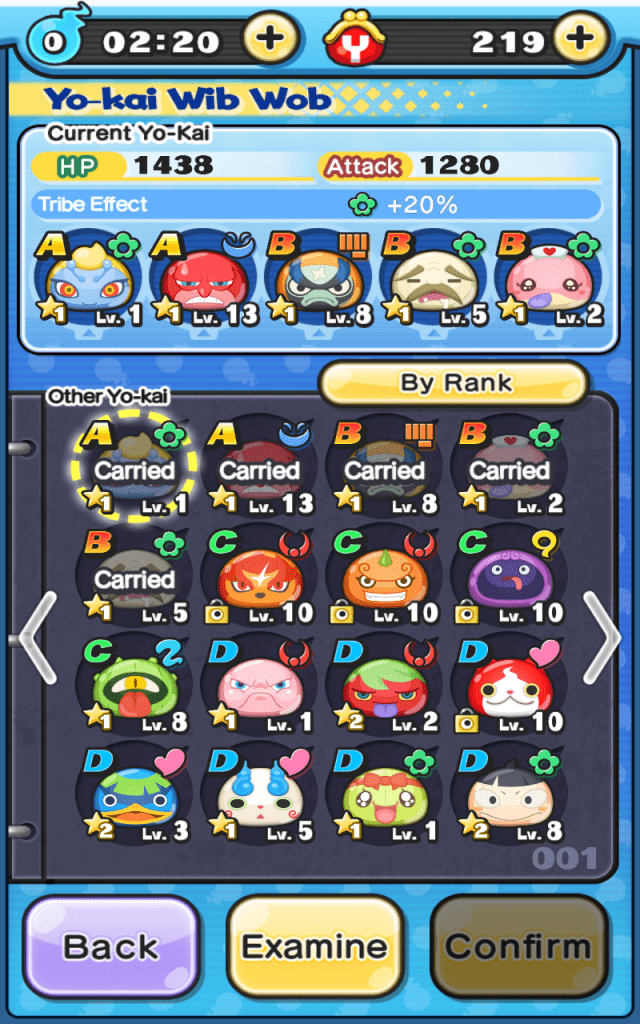 One final tip for making a party is to have them Yo-Kai of different colors because when there are three dozens of them in a bowl, it gets visually difficult to make chains when there are two or more of similar colors. Try to have them in contrasting colors for better matching speed.

Yo-Kai popping is fun, yet you have to keep tabs open on many things going on. When in doubt, try to match them so that the last one in chain is at the periphery of the bowl, so that the rest can be chained afterward.

Stretch that chain. The bigger the bubble, the longer it stretches, so don’t be surprised to see what combinations the game sometimes considers a match.

Try to make as many huge bubbles as you can before you start popping them – engaging multiple big attacks will give you a combo, and boost the Soultimate meter.

Try to engage the Fever Time as much as possible (by making long chains). During the Fever Time, your attacks stack up, so when it’s over, your enemies get attacked with a cumulative blow. It’s worth noting that if you face off multiple enemies, the Fever Time will result in a cumulative blow to all of them, collectively. You can also use the attack-based Soultimate moves when in the Fever mode, for even better impact.

Don’t forget to engage the Soultimate Moves when they’re ready. It’s good to have Yo-Kai with different types of Soultimate moves because they all contribute to the party in most unexpected ways. Some are attacks, others will boost your Y money count. Some are healing your party HP, others rearrange Yo-Kai in the bowl. Don’t just engage them without any tactic. For example, a Timmydevil Soultimate move pops all Timmydevil wibwobs in a bowl to attack, so there is no sense launching that attack when you have a couple of Timmydevils wobbling around in the bowl.

When you befriend one and the same Yo-Kai multiple times, you still have one Yo-Kai, but its Soultimate Move rating increases.

Yo-Kai Watch Wibble Wobble is sometimes utterly annoying. There are plenty of secret areas, but you don’t know they’re there until you accidentally bump into something. For example, I was grinding for money in the first area and repeatedly defeated its boss level, when suddenly I defeated the boss in a way that met some hidden requirement and a secret Sewer was unlocked. And it’s like this forever – replay stages randomly until you bump into something. The game never tells you which stage is best to grind, and which unlocks a secret passageway, so you end up wasting a lot of spirit. Not fun. Here are some hidden stages listed, so you can poke into the right holes.

There are four more areas, and if you are that far, I suggest you check out this comprehensive list compiled by a fan of the game. 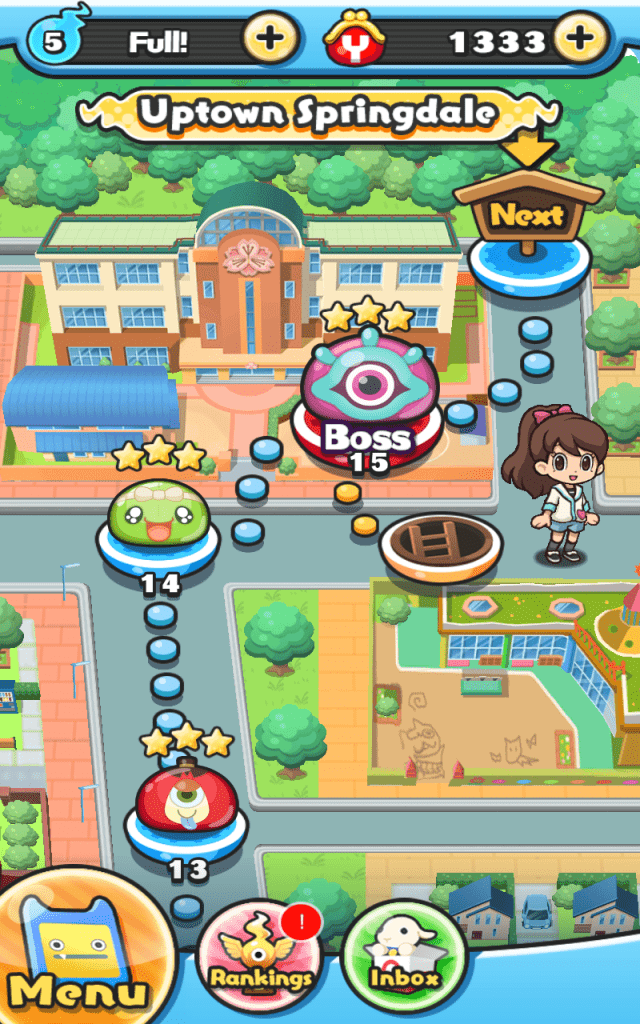 Once you beat level 30, the one with a dog with a human face, you unlock the Fusion tab. There, you will see a list of Yo-Kai ready to be fused. Pay 500 Y money for a single fusion operation, and behold the high-tier Yo-Kai you get for it. Totally worth the sweat. 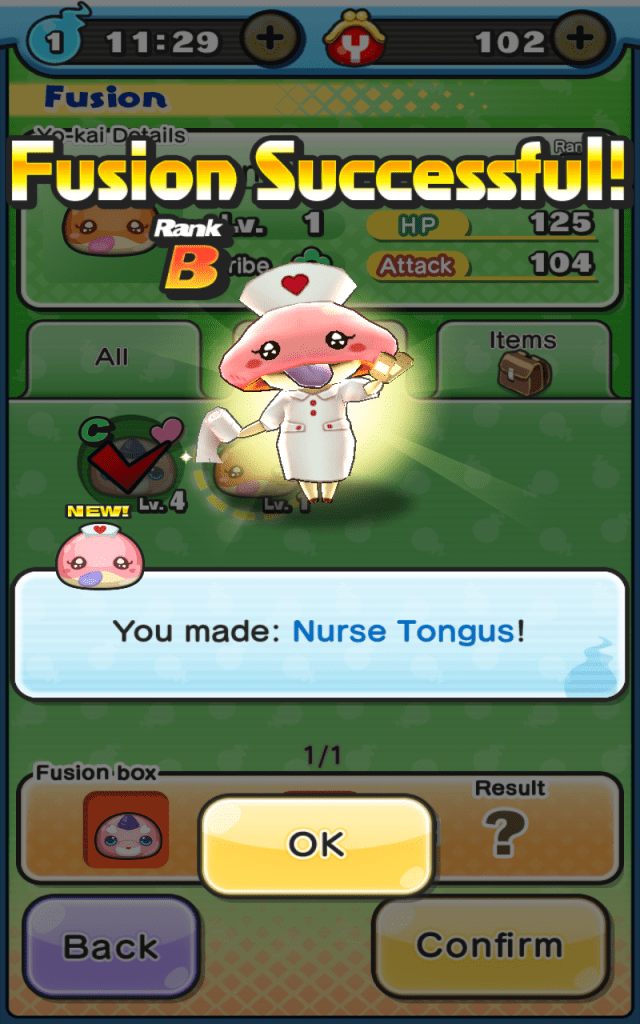 Evolution is a Yo-Kay + an item

Once you beat Sergeant Burly in one of the first levels of the second area, Mt. Wildwood, you unlock Missions. You can, of course, check them out to see what you should do, but in my experience it’s easier to just play and collect the rewards as they come – you complete the missions inevitably. Since they task you with popping wibwobs, or making combos, or fusing Yo-Kai – you perform all that eventually. The fun part with missions is they give you a good deal of Y money at once when you befriend Serg. Burly and unlock the Missions. After that, the influx slows down, so make sure you spend that money wisely. 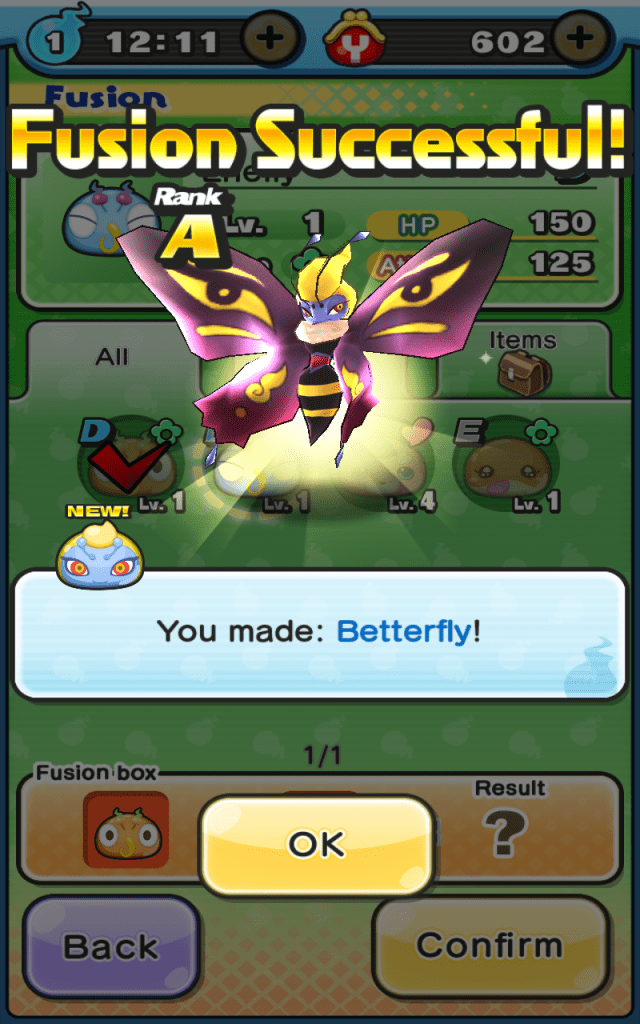 I would not recommend to spend Y money on food – I never befriend Yo-Kai when I throw food at them, while unexpectedly befriend those I simply defeat by playing. While you get the different coins by completing missions, you can spend them in Crank-akai machine to get more Yo-Kai. Unless you purchase lots of Y money via IAP, and have some spare to roll the machine, I would not suggest you spend the money on it.

Spend your money on removing Yo-Kai level caps, fusion and evolving instead. Sometimes, a spare 500 coin can save a battle.

How to level-up Yo-Kai fast

You can purchase XP orbs in the Shop – that’s the fastest way to level up a new Yo-Kai. You can grind the easier levels. Eventually, your Yo-Kai will reach the level cap, which you can remove by paying Y money.

In Blossom Heights stage 43 there is a Yo-Kai Noko, which, when defeated, gives a lot of XP to the team. Grind that level to your heart’s content once you get there – it really is a significant boost. Just make sure you have enough cash to remove level cap from the team members. 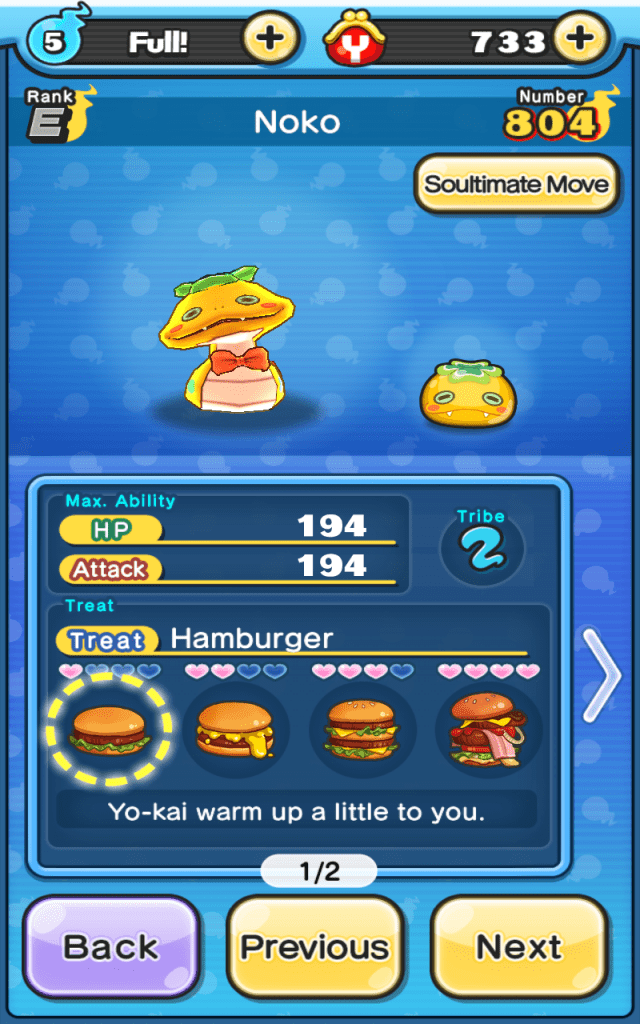 For a while I could not figure out how to send your friends spirit, so I thought this would be useful to some equally challenged as myself. Go to Ranking, see the ranks of your friends there. From this tab you can send your friends spirit every now and then. You receive the spirit sent to you by friends in the Inbox. At the same time, there is a Friends tab in the main Menu, and you use it to invite new friends and view friend requests. Kind of counter-intuitive – you need to hop between three menus in different windows to manage your social interactions. Doh.

This might not be the most fun part, but in case you are worried you have a “little” in your title, don’t worry. Over time you will be rewarded new titles, new avatars and can switch them at your heart’s content. Right there where your profile is, is also your friend code – in case you want to share it. 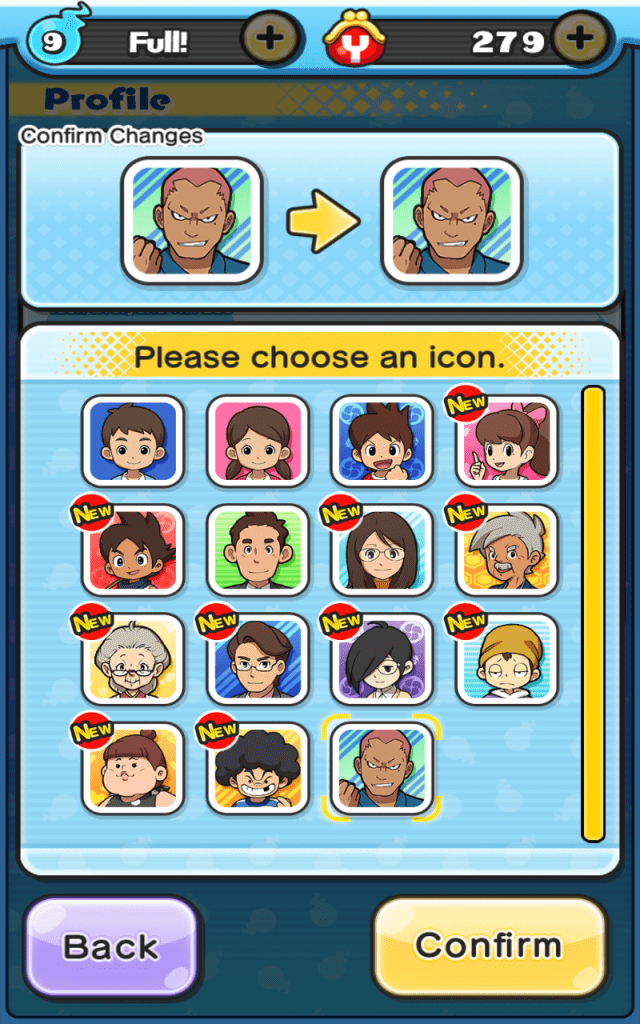 Feel free to post your friend codes in the comments below because the Reddit threads list codes of people whose friend lists are full, so you can’t add them. Would be nice to have a few fresh codes for a change. Share your tips, too!

Here are a few good threads on Reddit (1, 2) I used to combine with this guide on Gamefaqs to get a clearer scheme for fusion and evolution.