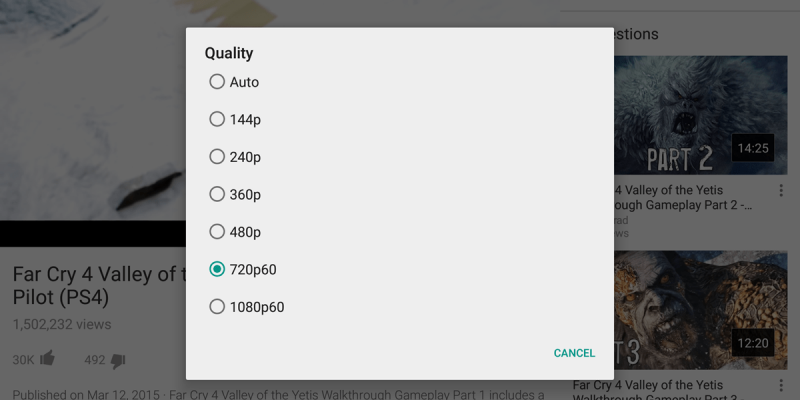 The YouTube website has been able to play videos in 60fps since last year’s October and now this capability was added to its Android and iOS apps as well. If you’re not getting an update for the app – don’t worry – the new feature was implemented on the server end. All you have to do is play a 60fps video and you’ll find ‘720p60’ and/or ‘108060’ options under Settings.

The old 30fps options have been removed, so users can’t watch high resolution videos at lower frame rates anymore. It was about time 60fps became one of the standard options for watching videos on YouTube – we had the hardware to record and play them, so the Web needs to comply.

It’s true, the majority of video content such as movies and TV shows, is still recorded at 24fps or 30fps, but video games are the exception. They run at higher frame rates, so if you enjoy watching game trailers, reviews and play sessions, you’re surely going to benefit from 60fps playback from the start.

Speaking of, here’s a 60fps video you can watch right now on your phone and see how it looks live:

There are also many camera models supporting high frame rate recordings, so YouTube is hosting a decent amount of 60fps videos by now. 3D viewing is also improved by higher frame rates, so YouTube’s new ability will benefits us in multiple ways.

Follow us on Pinterest, Google+, Facebook and Twitter to receive our latest apps & game reviews, news, tips and how tos for Android, iOS and Windows Phone. You’re also welcome to join the Pocketmeta forums for more mobile talk!