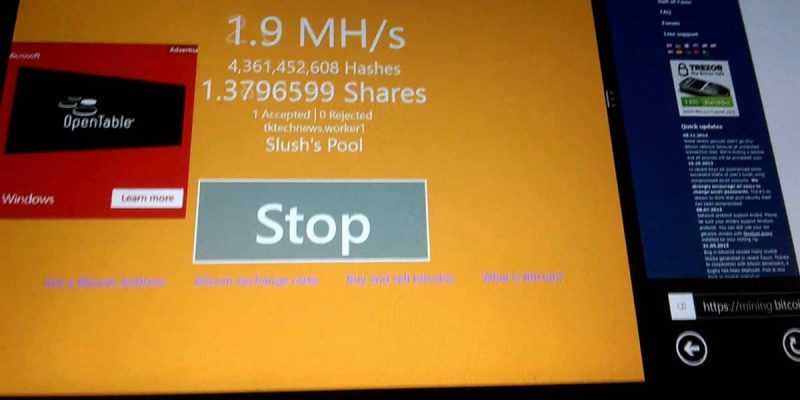 Cryptocurrencies are all the rage right now, and Bitcoin remains the most popular one. If you own a PC, there’s nothing stopping you from mining the coin yourself, which is why we’re going to talk about the best Bitcoin mining software for Windows. For those interested in what is Bitcoin and the tech behind it, we wrote a simple to understand user-guide.

When mining Bitcoins, you’re basically sharing your computer resources for solving complex equations that are required to create new coins. Just like when purchasing bitcoins with real money, you can use your mined coins to perform transactions. There are numerous websites and services that allow Bitcoin payments right now.

Before the holidays, the price of 1 Bitcoin has peaked to almost $20,000 and right now it has stabilized around $14,000 – $15,000. As more Bitcoins get discovered by those who mine it there are fewer coins available, and of course, it also gets harder to discover new ones.

While you can’t expect to get rich mining Bitcoins on your PC you can still make a small income. With that said, let’s see what are the best Bitcoin mining software for Windows at the moment.

Bitcoin Miner is one of the most well-known Bitcoin mining apps and you can download it for free from the Microsoft Store.

The tool is easy to use so you don’t need to be very knowledgeable about cryptocurrency mining. Bitcoin Miner also allows you to monitor your mining progress with handy features such as profitability reports. On top of that, it supports mining pools, DirectX 10 & 11 GPU mining, as well as fast share submission.

The application enables you to control your GPU and CPU usage using the power saving and night modes. However, you should know it only runs in an open window so you can’t close or minimize it otherwise the mining process will be paused.

Bitcoin Miner is free but features ads, which I think we can agree are a small price to pay for a free and friendly app. 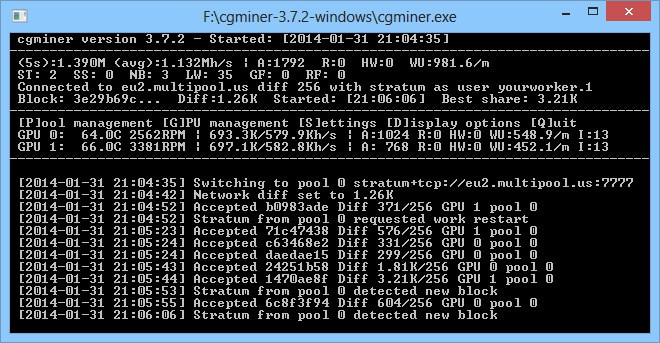 CGMiner is the most popular and feature-rich Bitcoin software miner. It primarily supports ASICs and FPGAs but if you want to use it for GPU mining simply download a version older than 3.7.2.

The application supports Windows, Linux, and Mac and provides a laundry list of useful features such as monitoring, logging, config files, API monitoring, and overclocking options. It can be used for both pool and solo mining and can be used with most Bitcoin ASIC miners.

Regarding hardware control, CGMiner allows you to adjust voltages and other parameters using specific commands. Extensive documentation is required which is why we recommend you check out CGMiner’s readme section on github.

The clients presented above may be among the best Bitcoin mining software but not optimal solutions if you have multiple mining rigs and of different types you need to manage.

In that case, you should definitely check out Awesome Miner. The program offers robust centralized mining management functions. To begin with, it supports over 25 mining engines, including bfgminer, sgminer, cgminer, srbminer, and xmrig. Awesome Miner works with all major mining algorithms such as X11, SHA-256, Zcash, Scrypt, and Ethereum.

It’s possible to add, switch and manage pools for multiple miners in one operation. The feature-rich dashboard allows you to monitor the temperature of all your ASIC and FPGA machines.

The program is designed to work on the Windows platform although you can access it from any computer, tablet, or smartphone using it’s web-based UI.

Furthermore, the program lets you configure privileged API access and set up the default pools for all Bitmain Antminer ASICS in the same operation. Last, but not least, you can create custom triggers and actions using the built-in C# script engine. 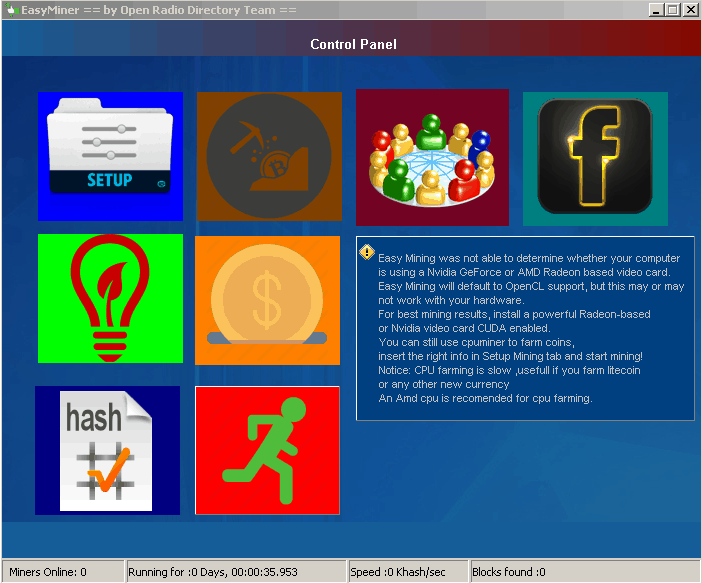 EasyMiner is a graphical front-end for several applications that allow you to not only mine Bitcoins but also other cryptocurrencies such as Litecoin. It’s a simple tool that makes it easy to track your mining activity using customizable performance graphs which include various parameters like hash rate, total shares in the past hour and total shares accepted/invalid.

The best part is EasyMiner is a free and open-source app that provides support for the Stratum and getwork mining protocols and works flawlessly on x86 and x86-64 machines. 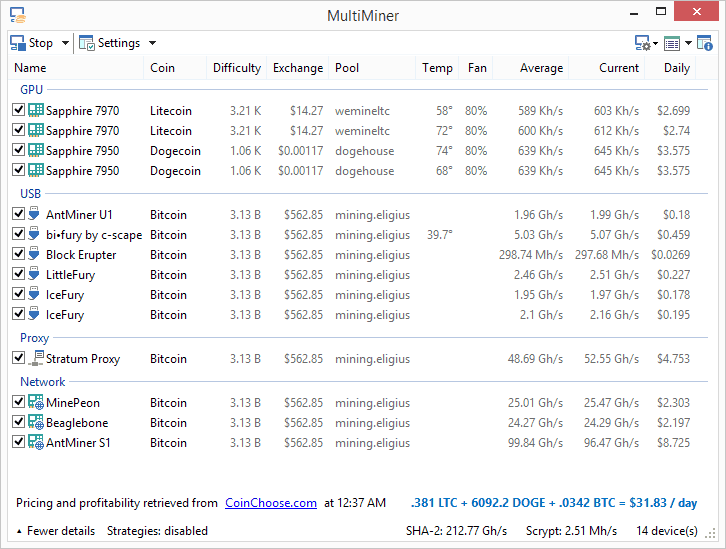 MultiMiner is an open-source desktop mining software that supports multiple cryptocurrencies but also allows you to mine several types of coins at once using different hardware components of your computer.

The application automatically detects your PC’s available mining hardware and allows you to select which coins you want to mine from a list. While it does have some advanced features, using them is quite straightforward so MultiMiner is an excellent choice for beginners. 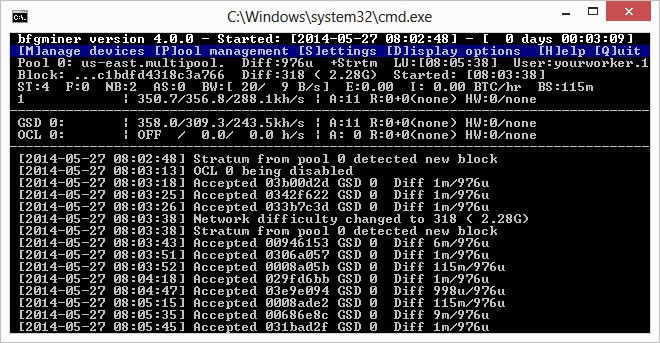 Last on our list, BFGMiner had its rightful place on our list of best Bitcoin mining software for Windows. This free tool allows you to mine using your CPU and/or GPU, plus it provides support for fan control and dynamic clocking.

While you still have to decide which app you’re going to use for mining Bitcoins, keep in mind you can’t use two or more mining programs at the same time. Ultimately, you’ll need to try them one by one. 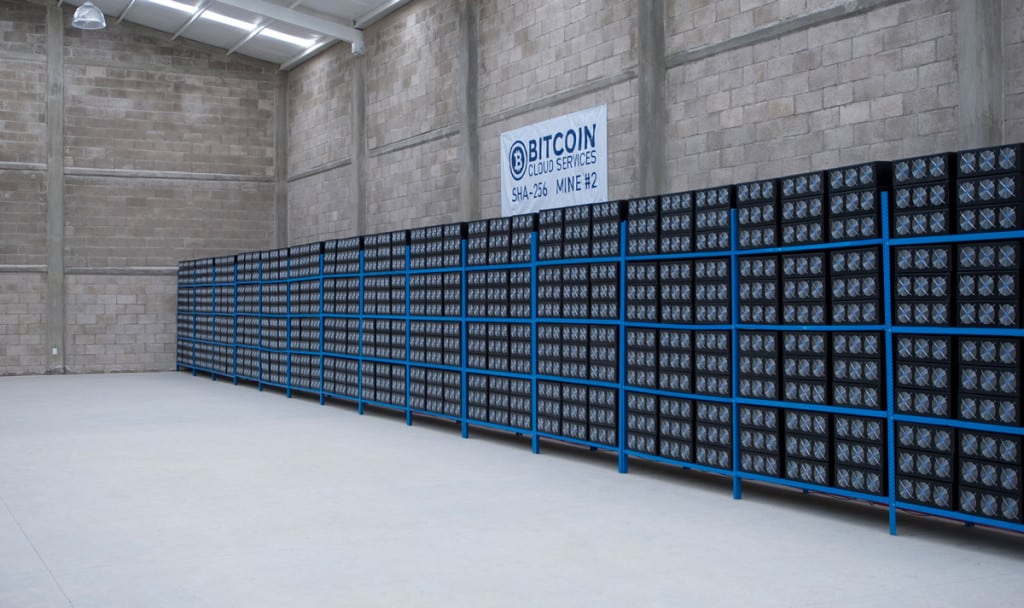 Those don’t have the budget or don’t want to purchase specialized mining hardware have cloud mining as an alternative. Cloud mining is very straightforward: just like renting a house, you are renting computing power. In most case, a contract for a certain amount of hashes per second needs to be purchased. Also, the amount of time you can use the service is set before the purchase.

The cloud mining company will mine for you and send you the rewards, most often on a daily basis. Obviously, cloud mining solves all the problems you would have with using dedicated hardware, including electricity costs, setup, heating and noise issues and so on.

Nevertheless, cloud mining does have some disadvantages. One of them is the fact you won’t be able to control the mining hardware or learn anything about the process of Bitcoin mining. Another problem is cloud mining usually gets you a significantly lower ROI compared to traditional mining. Also, an issue that shouldn’t be ignored is the fact a lot of cloud mining services are scams and quite a few have been discovered so far.

On top of that, once you purchase a contract there’s no turning back. If you’d have a regular miner running in your own home you can overclock it or turn it off as needed. With cloud mining, once you purchase the contract you can’t get back the money you paid with or pause it and wait for Bitcoin prices to raise if that’s the case. 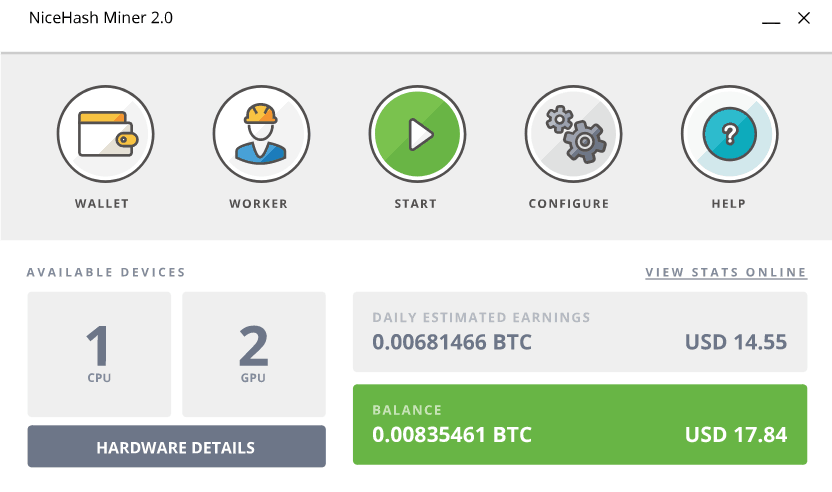 NiceHash is an excellent choice for those who are new to the Bitcoin mining field. With NiceHash, you can mine cryptocurrency (BTC included) using your computer’s GPUs and/or CPUs. The best part is, NiceHash miner is extremely quick and easy to set up.

NiceHash is actually a crypto mining marketplace and they sell cloud mining contracts for Bitcoin, Ethereum, and ZCash so it’s a reliable place from where you can purchase hash power.

Hashnest is a cloud mining company owned by Bitmain, one of the largest ASIC miner manufacturer. It’s safe to say this is a trustworthy service and you have several mining contracts to choose from. 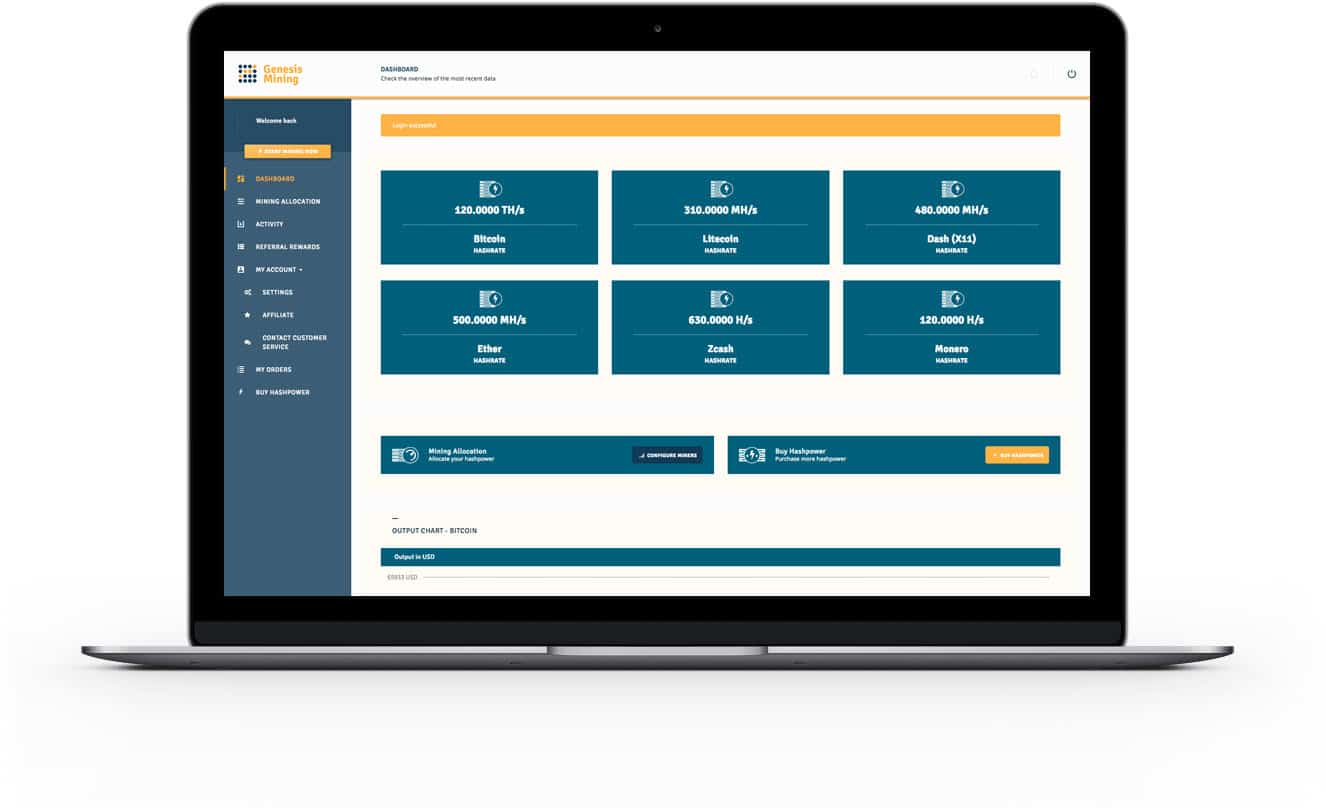 Genesis Mining is the largest Bitcoin mining company and was founded in 2013. They provide various contract options and sizes for several cryptocurrencies, specifically Bitcoin, Dash, Ethereum, Monero, Litecoin, and ZCash.

As I already mentioned, their contracts are super flexible – they even have contracts that allow you to use the hash power to mine multiple coins at the same time and switch between them on a daily basis. 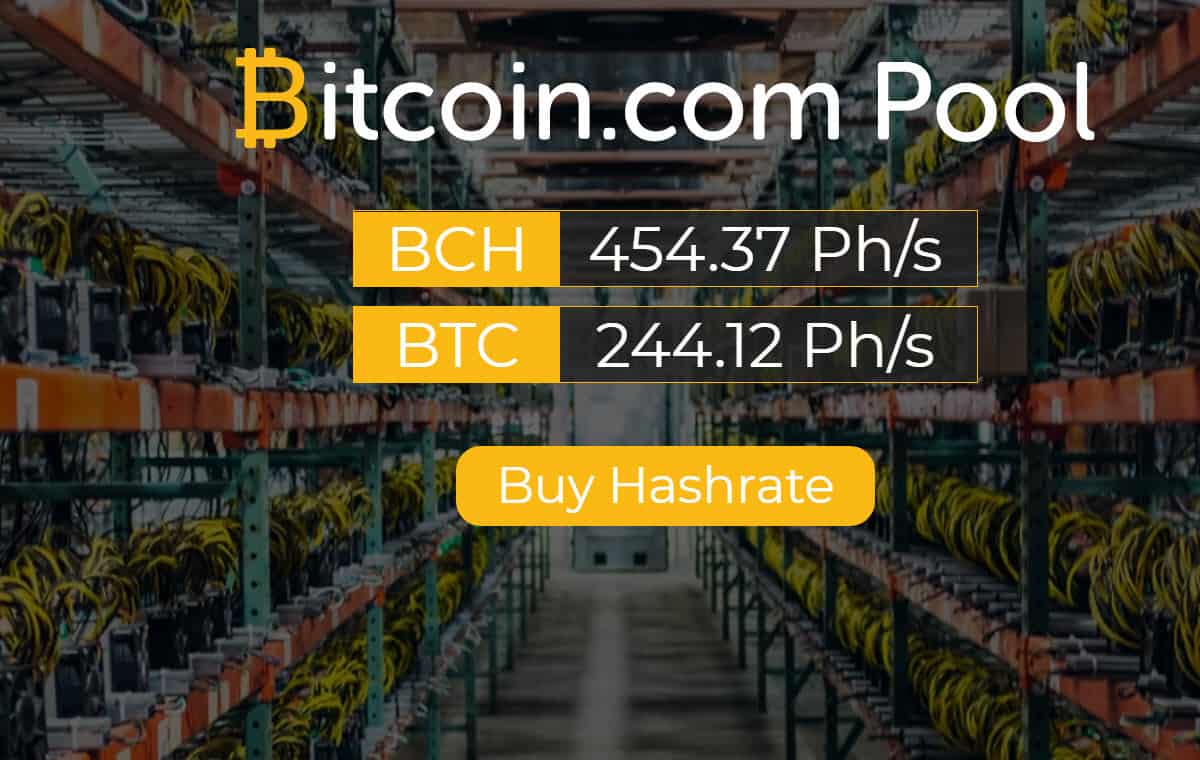 pool.bitcoin.com is another great choice for Bitcoin cloud mining plus it also lets you mine Bitcoin Cash. They pay a 98% block reward and they contracts include a decent amount of entry level options.