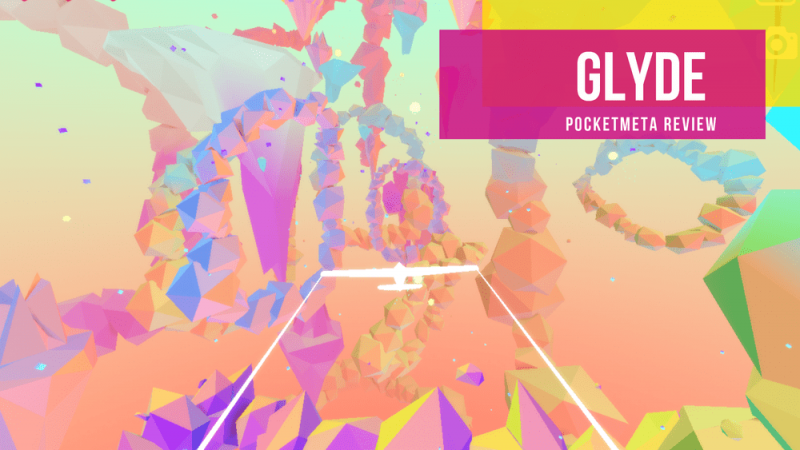 Minimalist, spectacular and Zen, Glyde made quite an entrance to Google Play. It’s an indie game by MBGames, and we have very little information on who these guys or girls are. What we do know is it seems to be the first game published under MBGames byline on the play store, and as of now there is no iOS port.

Yes, you heard it right – it’s free, no IAPs. Now that we got the basics out of the way, let us see why I am so excited about this game.

Glyde is a flying game where you control a lightweight plane catching zephyr to soar around a spectacular 3D environment. It takes off automatically and you can simply watch it fly until it hits something. But you’d better off try those funky controls. It does not have a support for the external controllers, yet, but its default and as far as I can tell the only control scheme is interesting. 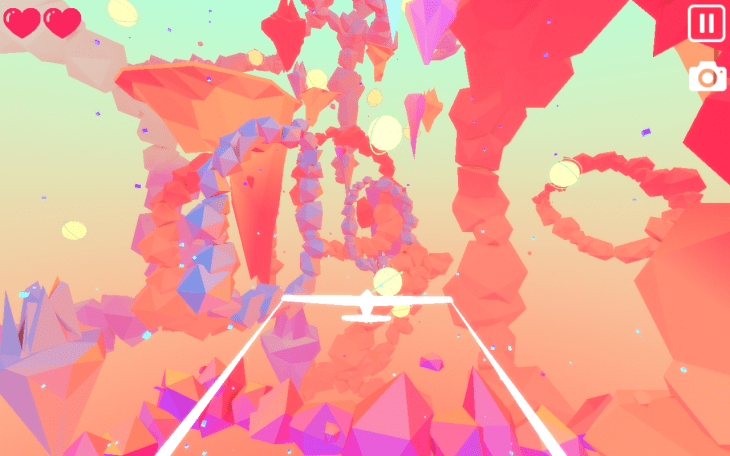 It’s not immediately clear how you control that plane. Tapping left and right seems to send it jerking erratically. Yo need to swipe and sometimes just lead the plane in the direction you need. The only thing that takes getting used to is the plane soars high if you swipe down, and vice versa. I wish there was a way to invert that because I tend to think linear – swipe up, move up, swipe down, move down. The game has it inverted.

There is a second tilt-based option, which combines tilt and touch, and I found it easier to get the hang of. 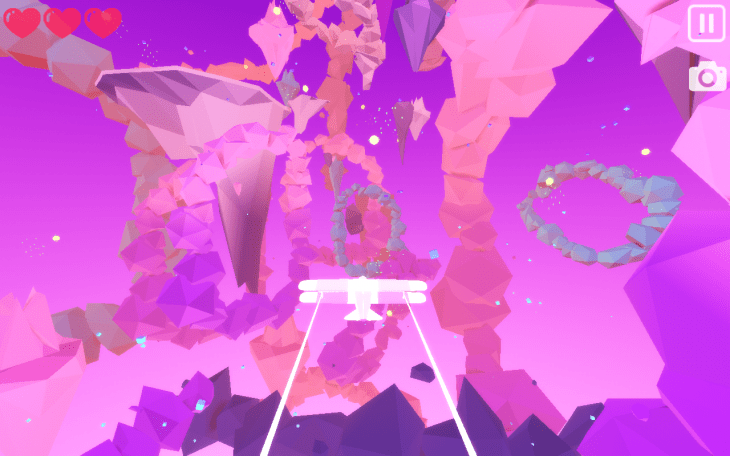 It takes some 5 minutes to get used to the controls, and when you do, the game is sheer bliss. The plane is maneuverable and the environment is not overly hellish. It’s a sci-fi floating maze filled with color and music. The colors are so intense it seems the air is liquid vanilla and ice-cream, with strawberry jam and peanuts sprinkle.

I am a dark-theme guy and prefer my screen amoled black, and apps’ UI muted by Lux to match the environment. I love Unpossible for its dark Tron-ish style. Glyde is totally different, and I was going to hate it for the amount of pink and yellow, but I ended up engrossed and mesmerized.

Even though the colors are vibrant, the shapes are low-poly style that remind me of another awesome indie game LaraaN in its pure aesthetics (an awesome game I could not get through, it was too hard). Glyde is a feast for the eyes and a delight of a relaxed, moderately challenging gameplay. 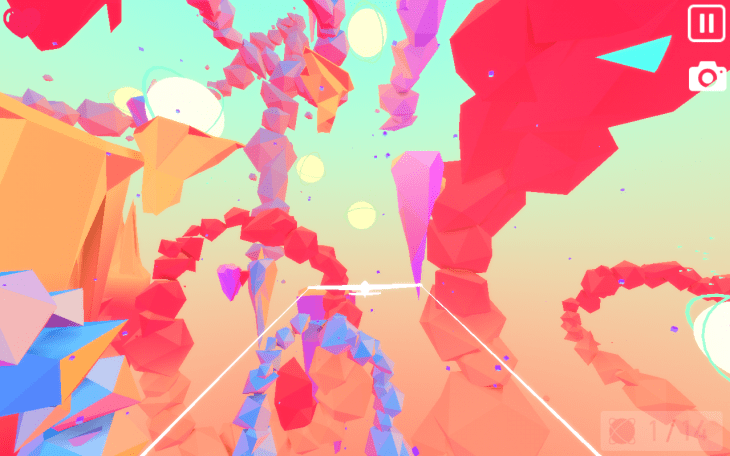 You fly your plane and you have three lives to collect the light orbs scattered across the space. Notably, the active playground is where the floating structures are. You can fly beyond that area, but at some point you will hit the end of the world and get reverted back to the starting point. As long as you have a life, you respawn from the platform and keep collecting the orbs.

Once you clear a stage, you begin the same adventure but in a different area and with a new plane. The difficulty is escalating smoothly, and as your skills evolve you will find yourself enjoying the cool aerobatic maneuvers. Since you are not limited by time, you can enjoy yourself while completing the mission.

If you run out of lives before collecting all the orbs, you get back to the start, the first area. 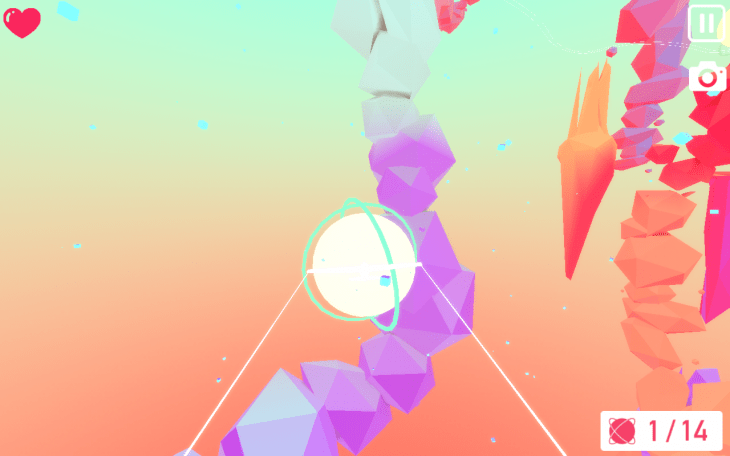 The final touch that got me hooked is the wonderful soundtrack that adds style and the right beat to the action. So, it’s not the kind of zen that puts you to sleep, but quite a dynamic experience that’s engrossing and ultimately very relaxing. Glyde is definitely the kind of game that refreshes your mind.

You can pause the game and you can use the built-in capability of taking screenshots as you play – there is a camera button. That’s it. The UI is minimal, and beautiful.

There is also a huge potential for growth – more levels, more control options, a standalone Zen mode to watch the plane as it flies endlessly through the vortex of ice-cream, a save progress option, a special dark theme. It is a game worth charging money for, so giving it away for free is a smart move that will allow the game to get some traction and audience. 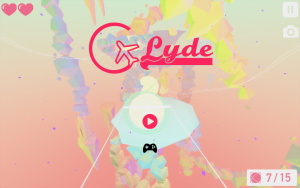 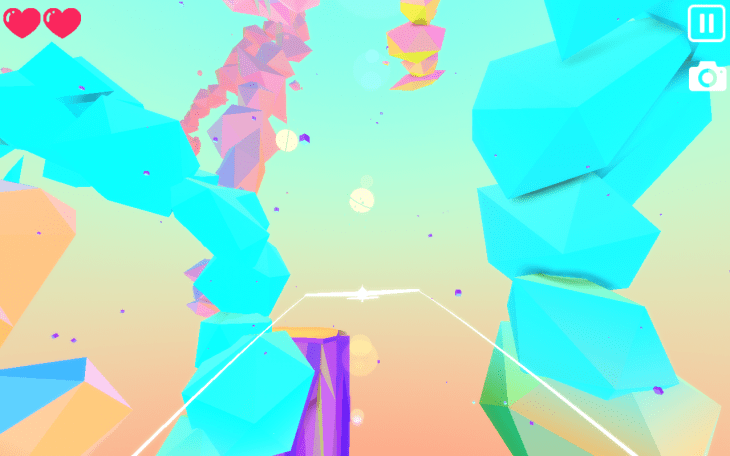 Glyde is definitely an indie game that stands out from the crowd. Not only thanks to its vibrant, mesmerizing aesthetics, but the enticing gameplay that sees you controlling a lightweight soaring plane on a fun sci-fi trip across a floating maze. It’s beautiful, trippy, has a catchy soundtrack and an addicting gameplay. It’s an atmospheric experience I will definitely want to go back to whenever I need to relax. The cherry on top? It’s free, no IAPs. We recommend it.