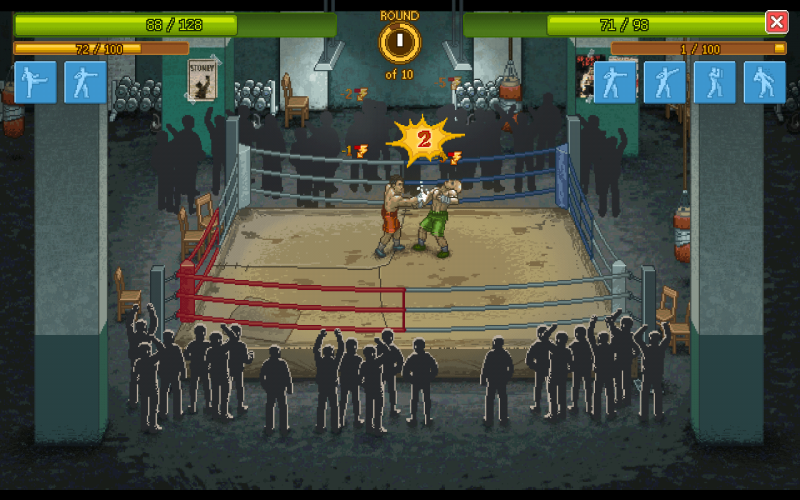 Body’s a temple. Feed it well, live to work out, rest, and you’ll be able to use it to make your way to either the top charts of MMA, or become an underwear fashion model. Both options earn you lots of money and girlfriends. Perhaps, the mma require more physical investment and may inflict serious physical damage, but it does not compare to the mental and psychological damage fashion industry inflicts. And they make you shave your chest. So, choose your path carefully. Or, get yourself an education and live off of your brain.

Strategy, tycoon, micromanagement retro-like Punch Club landed on the app stores and those who played the PC game need neither introduction, nor review. Those who have not, and are still on the fence about the $5 purchase, read on. 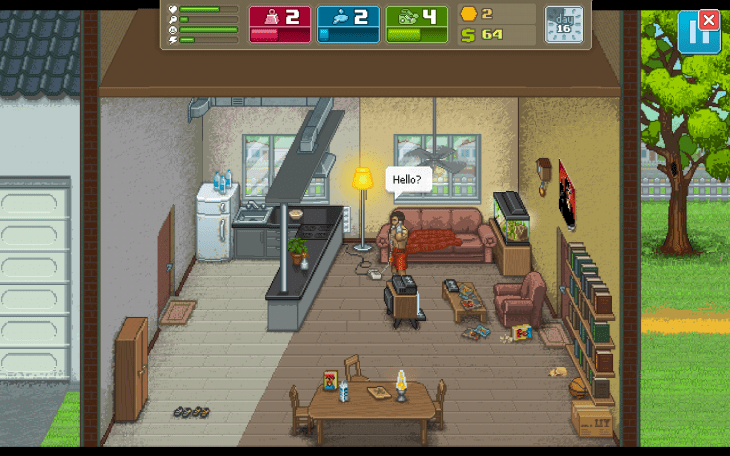 If you think it’s a fighting game, where you control an MMA fighter, it’s not. The fights are cosmetic, and depend on your stats and random chance. It’s a player management game, like The Sims, only you control one dude who lacks character and needs you to tell him what to do. His Dad was in MMA, and got murdered when your hero was a young boy. For some reason, his brother and Mother left him with a cop. Story-wise, Punch Club is a quilted blanket of references to the cult movies of the 80’s and 90’s. Fight Club, Pulp Fiction, Teenage Mutant Ninja Turtles, Jay and Silent Bob, Blood Sport, Speed Racer, Snatch, Rocky, Mortal Combat, Street Fighter – and the list goes on.

On the one hand, there are plenty of nostalgia-inducing moments “Hey, that’s Brad Pitt!” kind of thing. They add to the atmosphere. On the other, it feels a little too much at times and it may chip away from the game’s own personality. The abundance of references to the old-ish movies sometimes feels like an overdose. But then again, you don’t listen to Eurythmics when you like the Beleiber style, so you choose. 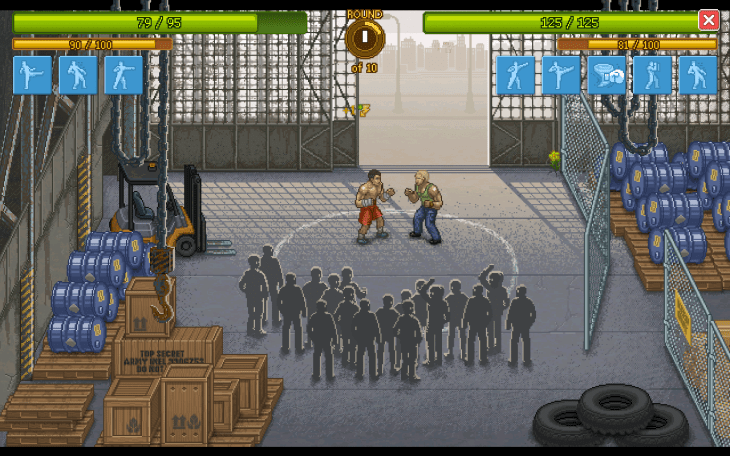 Besides sparring with crocodiles and movie characters, your hero gets to work hard to earn very small sums of dollars. It happens so he’s not pursuing any career other than mma, so his choices are limited to pizza delivery and construction. He also needs to train a lot, and the gym costs $10 each time. He needs to eat well, and not some junk, but real meat. He needs to travel by bus when he’s tired or out of time. He has friends to hang out in a bar with, and he has a girlfriend who requires attention. He also has a murderer to find, and a rating to climb, so he gets to fight a lot.

How do you squeeze all this into 24 hours? The game is unforgiving and punishing in most dire ways. If you need the money, you have to work and drop out of the training. Then you need to sleep and catch up with your workout because you lose shape. Then you get penalized for skipping a fight. And then your girlfriend is pissed off because you never have time for her. Punch Club feels like a small, trimmed, yet realistic version of Rocky’s life if it were real. 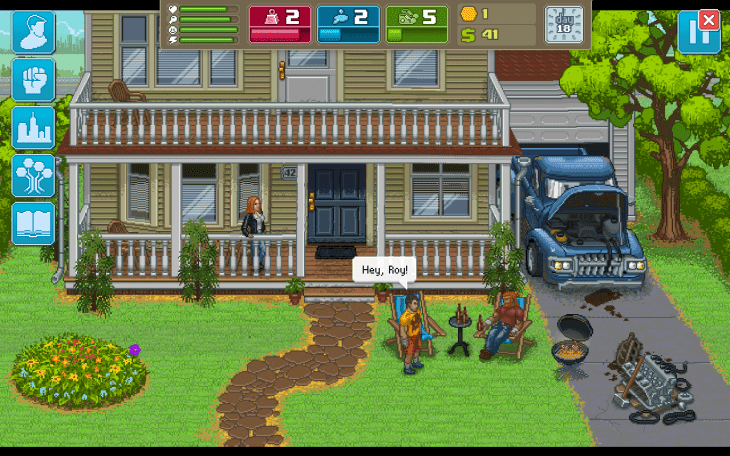 He can be low and sometimes go to a friend’s house to grab a snack because he’s broke. However, with heavy grinding and dedication, he can become a bad-ass fighter, run a profitable business, and avenge his Father’s death. Or, go to jail and get ditched by his girlfriend. You never know. 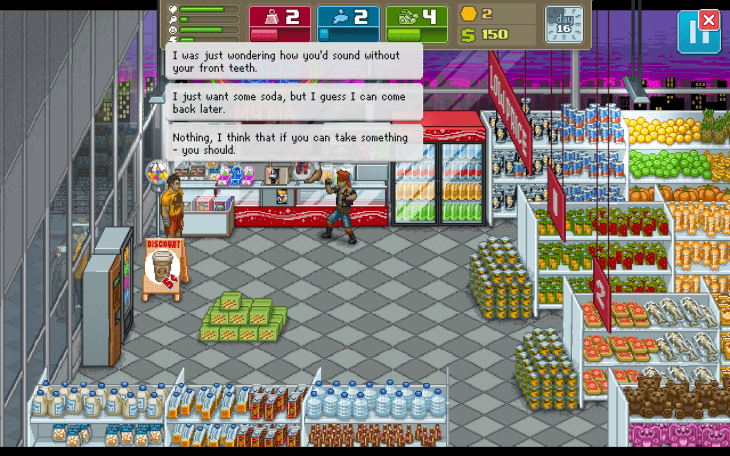 The gameplay is money and time management routine, with a few conversations and choices you make here and there in the story. The fighter stats management is one crucial aspect you will be assessing. The thing is there is a basic skill tree, and three special skill trees. You will advance in the basic tree in order to unlock one of the three others – Way of the Bear, Tiger or Turtle. The three animals correspond to the three stats of each fighter – strength, agility and stamina. You need to advance in only one, you can’t have them all maxed out.

The problem here is when you first play the game, you don’t know which skills in the basic tree are valuable for you, and which are a waste of hard-earned skill points. You get the latter by fighting and sparring. Notably, somewhere in the beginning, the game sends a text bubble that tells you which style best suits you – make note of that. 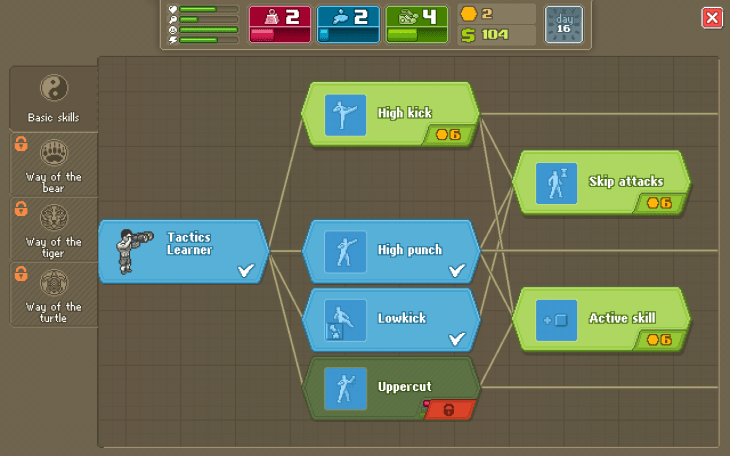 The combat is, unfortunately, boring. Your input is required in between the rounds where you can change the active skills. The fight is automatic and has the randomness factor to it. You have two active skills as you start, and as you play you can unlock more slots. The problem is there is no universal combination of skills that will get you ahead of every player you fight. This is due to each opponent’s possessing unique combination of skills. These skills work like rock, paper, scissors, but they’re difficult to figure out or memorize, unless you know stuff about MMA. Now, the tedious part is how you can’t skip the combat scenes, where you just sit back and watch. This is especially boring when you know you’re losing. 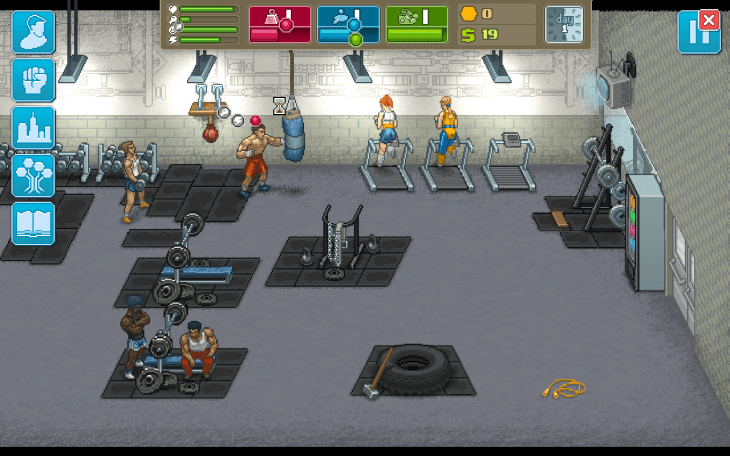 Visually, the game is marvelous. Punch Club has a special retro effect, if you wish, but its default looks are glorious enough for anyone reminiscing of the good’ol times. The chiptune music is fine, and does not interfere with the experience, adding a smooth atmospheric background.

Punch Club might have a few performance hiccups, but the developer is pretty quick in releasing fixes. The game did not scale well on my Samsung tablet, which made it unplayable, but a few days later a fix rolled out. The game starts lagging and heating the device if you play 1-1.5 hours straight. On the other hand, you can play it offline, and it’s a major time gobbler. In fact, it’s best played in long sessions, when you can grind your way through the training, sleeping and earning a living to advance significantly. Short sessions won’t have that progress effect. 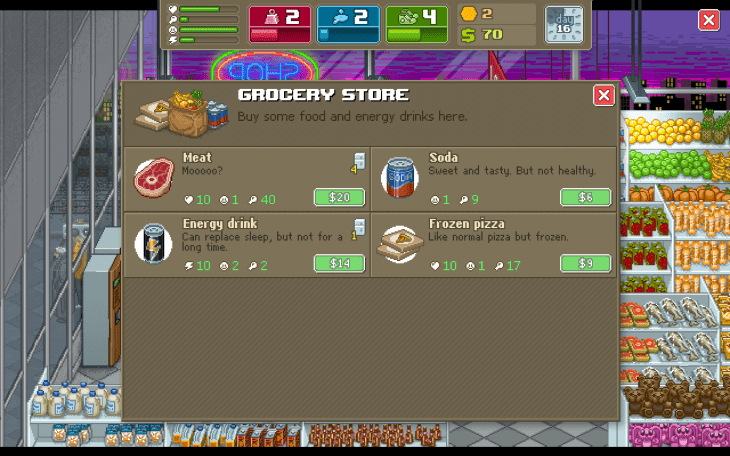 One other thing to note is that you lose stats daily – just as you would in real life. You lose them if you don’t train or fight, and at the beginning, the progress feels like one step forward, two steps back. There are skills in that basic skill tree, that put a cap on a respective stat and prevent it from deteriorating below a certain level. Invest in those – trust me. Don’t forget you need to activate these skills in the character management tab apart from the skill tree. 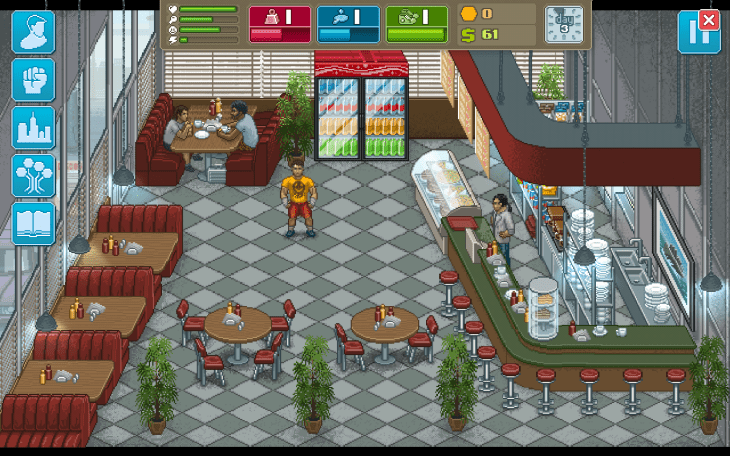 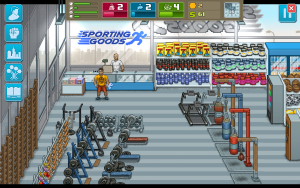 Punch Club has a very specific target audience, and it’s a great time and money investment for the right player. It does come with heavy grinding, but it’s a different kind of grinding than the one you find in freemium games. You can’t buy your way to success and bypass the grinding walls. You have to work out and exceed your body’s capabilities, manage your time, finances, health and relationships wisely in order to succeed. Yes, at some point it seems like there is nothing but grinding to this game, but your patience and perseverance will be rewarded when the quantity of your efforts convert into a quality leap. Overall, it’s a wonderfully crafted, testosterone filled, fight-club-tycoon game that’s highly addicting and good-looking, says a guy who is not even a fan of MMA. I like swimming, ok?