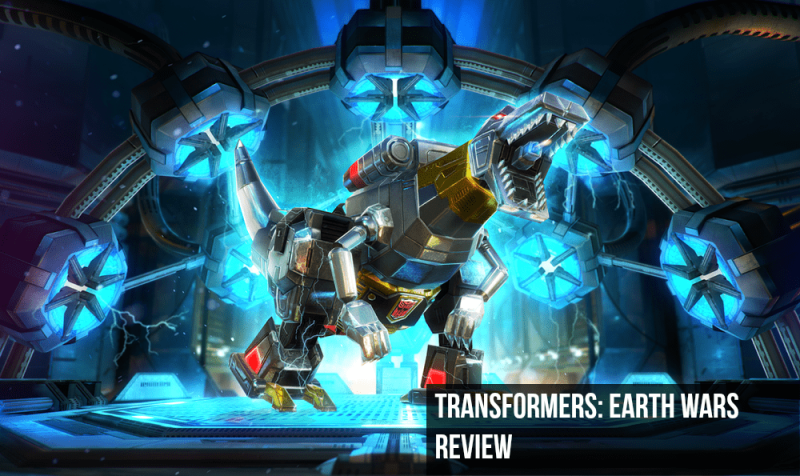 Transformers: Earth Wars has plenty of Autobots and Decepticons designed in the best traditions of the Combiner Wars toy models. The characters are simply wonderful. You can go to the hangar and marvel at your collection, poking at your bots to make them switch modes, or perform fancy moves.

The attention to detail is amazing, and the game looks crisp and polished. The lack of variety in the background and the lackluster world is made up for by the characters, the explosions, the transformations, and the story.

If you’re the kind of transformers fan who reads the lines coming from the bots and the human companions, you will love how Transformers: Earth Wars plays out in tune with the franchise. There actually is a meaningful story to it you might want to follow. It adds a ton to the replay value.

You can choose to be with the Autobots or the Decepticons. Each bot has a special ability you can deploy once in a while, and it adds more visual glam to the glossy looks of the game.

Later in the game, as you progress, you will be able to join or form an alliance and engage in 24-hour killing sprees, bringing the enemy to their knees. If you’re the kind of personality who likes to form that kind of bond with the fans of the franchise, you will like the alliance experience in Transformers: Earth Wars because the community is lively.

The IAP part is fairly straightforward. You get a lot of cash as you start to get going, and as you complete the mini missions you get the coins. These are used to speed things up occasionally. It is nice to be able to speed up the timers that have gone below the 5-minute cap for free. There are other currencies, such as sparks you need to upgrade a character in the Research Lab. You get sparks for drawing the same characters, which happens, but not as often as to collect enough for an upgrade. In other words, some things are fairly accessible, while others seem beyond the reach or locked behind an IAP.

Where it fails to impress

Pretty much everything else. In its essence, Transformers: Earth Wars is a base building game from the likes of Boom Beach and Star Wars Commander. It’s not a con per se if you are a fan of the genre and understand all the repercussions it brings with it. Which are the timers, the tediousness of building anything that’s noteworthy, in having to wait to upgrade HQ to be able to upgrade anything else. In cooldown timers for your characters in between the fights.

The most annoying part of the Transformers: Earth Wars is the battling one. As if departing from the formula is illegal, the developer sticks to keeping the battling AI-reliant. You can position your characters any way you like, they will still keep attacking the things you want them to attack the least.

While a Decepticon has been smashing my true and loyal Optimus Prime, the latter has been ignoring the devastating strikes and kept smashing some building that was not even a weapon. In other words, AI-dependent battles suck.

You can direct your characters attacks to a certain extent with the help of their special abilities. These need energy jolts to recharge. You get the jolts by destroying the structures of the enemy base. So, you need to direct them with the aim to destroy as many before they meet resistance and need the special skills. That said, the AI can ruin a well-forged strategy.

All in all, the battling is pretty minimal and provides very little satisfaction, which is a shame.
Building is enjoyable for the ones who love the slo-mo pace of the base building games.

If you get stuck in the story mode because your bots need more firepower, head over to attack the rivals or spend some time battling the alliance challenges.

One other nag is when you draw two identical characters, one higher-tier, another lower, there seems to be nothing you can do with the two. There needs to be a blend or fuse option, but I can’t find it. I was hoping the Research Lab would grant me that feature, but alas, everything about Research Lab is either expensive, or involves too much grinding.

Transformers: Earth Wars is what it looks like on the screenshots. A great-looking 3D mobile game designed for the fans of the franchise, and people of all ages with a fondness of Transformers will love the initial glossy cover of it. A story is a nice bonus, and the hangar, where you can marvel at your moving robots, is a treat to the real fans. It has its fine moments when you unlock your favorite characters, or ruin a rival’s base with ease, or up your shuttle to carry more bots. These moments are abundant at the beginning, but as the novelty wears off, the player is left with the barebone base builder with little joy when it comes to the battling, other than the visuals. And that only if you ignore the boring background. Grinding walls will urge you to replay same missions to up the XP of your bots, for there is no other way you can increase their powers. There is a Research Lab, but its offers feel inaccessible for an average player.

Transformers: Earth Wars is a decent game for the fans, but it’s too much of the same old thing to enjoy it for a long time. With a ton of personality and style, it lacks something that would spice up the gameplay. For example, more options to upgrade a character and more user input during the battle. The way it is now, it feels like its full potential is not realized just yet.