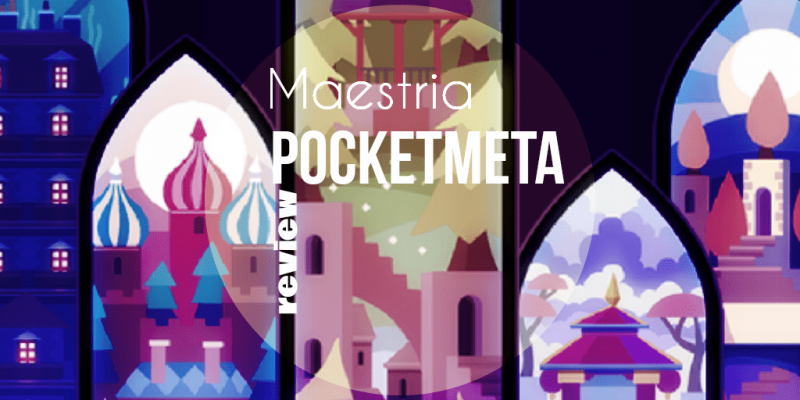 Relax and leave your expectations behind the closed doors. Leave them there in the cold, as you make yourself comfortable on a couch under a warm, soft blanket, with a bunch of cats, dogs or kids. Or, just a cup of hot tea, coffee or wine. Maestria is a little game that’s best played when you’re in no rush, but seek to relax and unwind instead. Why, it can also be enjoyed on a beach with a Pina Colada. The idea is to not expect it to be another Monument Valley, nor to expect to be pressed for decisions. It’s a different play style, folks, a French one.

Maestria happens to be the first release of a 26-year old indie from France, the land of Zaz, crunchy croissants and the best cheese and wine in the world. And Maestria has that special charm that works on the open minded.

The first thing that does strike an emotional chord is how this game reminds you of Monument Valley, although the resemblance is superficial. However, the game’s design must have been inspired by the ustwo’s epic success. To some extent, the Esher-esque architecture is present in Maestria, although it is not central to the gameplay. But the looks are beautiful. The colors are soft, dimmed, eye-pleasing and relaxing. The game is good at creating the right atmosphere to relax and forget about the mundane.

The soundtrack deserves a special praise because a) it’s beautiful; b) it stays with you; c) it’s written by the same guy who made the game. I have one favorite track already, and I am sure those who appreciate the laid-back and thoughtful little brain teasers will find Maestria’s art work and music outstanding.

Ring my bells, ring my bells – Maestria is all about ringing them bells. There are bells of different colors, and a girl named Fugue. Her goal is to bring harmony into the world, so she waves her magic wand and emanates a sound wave. The wave is like a circle on the water from the stone you drop. It rings the bell when it reaches it. It goes from the inner circle, Fugue, to the outer and then disappears.

The trick is to calculate the correct position of the bells and the girl to make the bells ring in the correct sequence. At first, it’s not difficult at all. The sequence is displayed at the bottom of the window and you can always double-check. Sometimes, you can move the girl, sometimes some of the bells. In the later levels, the additional elements are introduced into the equation – the stones that hush the wave, the stones that give it back its voice, the stones that send the wave back from the periphery to the center, Fugue. And so on.

Overall, there are 160 levels and several worlds of different style. Each world introduces a new element and more complex challenge. It’s all about geometry, really. The bells and Fugue are placed on a grid, and the grid is a building, but the bottom line is you always have to estimate the distance between the bells and the additional triggers and see how the sound wave plays out with all of them to create the target melody.

I loved the challenge and the escalating difficulty, even though I have not reached the middle of the game, yet. The game plays well in a nice company, or with children who like thoughtful games. In fact, I’d recommend Maestria to a younger audience because it trains the spatial thinking and creativity in problem solving. It might get a bit tricky when the initial levels are over, but it sure is a game fit for family play.

Replay value depends on the level difficulty. The more challenging levels might keep you busy time and time again until you solve them, and then again, you might forget how you solve them the moment you bet the level. Since Maestria is more of an atmospheric and laid-back brain teaser, you might stick around it for a good while.

It’s a one-time purchase, no ads, no IAPs. Considering the volume of the levels, the great design, music and a decent brain challenge fit for the players of all ages, I’d say it’s a safe purchase.

Maestria is definitely a brain teaser to check out if you like tranquil, thoughtful and good-looking puzzles. It does look a bit like Monument Valley, but that’s in no way a bad thing – everyone’s gotta do their marketing, which is a pain these days. The similarity aside, the game looks beautiful, and has a very smooth and atmospheric soundtrack. The gameplay is nowhere near MV, so keep that in mind – based on the geometry and spatial relations, Maestria has you moving and ringing the bells across 8 world and 160 levels of increasing difficulty and different styles and challenges. It’s a little indie gem we encourage you to check out, but in case you like your games more aggressive, you might want to skip it. Maestria is also very good for family play.