CureIt is an antivirus and anti-spyware scanner that is based on Dr.Web engine and which access Dr.Web most updated virus databases. A great feature of this program is it’s absolutely free of charge, but this is not the only feature CureIt has. We all know that nowadays there are a lot of new viruses that appear every day. To prevent the damage that these viruses could cause to your computer, CureIt accesses only up to date databases and the program is rebuilt every day. CureIt is compatible with all the versions of the Windows from 95 to Vista and it helps your computer to remain virus free.

This program scans your PC and removes the viruses detected and you don’t even have to install Dr.Web Antivirus first. It is very user friendly and it can be used anywhere in the world due to the 28 languages it supports. The languages are: Russian, Arabic, Armenian, Bulgarian, Byelorussian, Chinese (China), Czech, Dutch, English, Esperanto, Estonian, Finnish, French, Georgian, German, Greek, Hungarian, Italian, Japanese, Korean, Latvian, Lithuanian, Persian (Farsi), Polish, Portuguese, Slovak, Spanish and Ukrainian.

Get comprehensive reports on malware infections and security problems for your computer
3 / 1,419

Protect your PC with the collective wisdom of the Internet.
18 / 3,606

A lightweight yet effective security solution to safeguard your computer against security threats
4 / 2,220

A reliable program that lets you completely remove various Norton applications from your computer
32 / 86,426 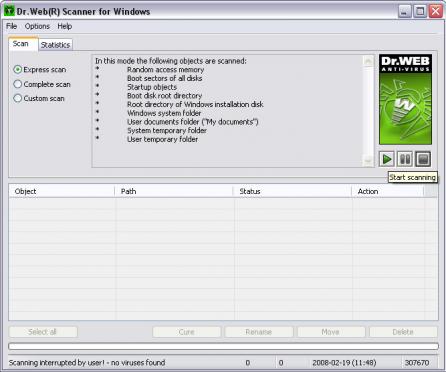 Kaspersky Anti-Virus 19.0.0.1088 (a) Advanced defense against all types of viruses