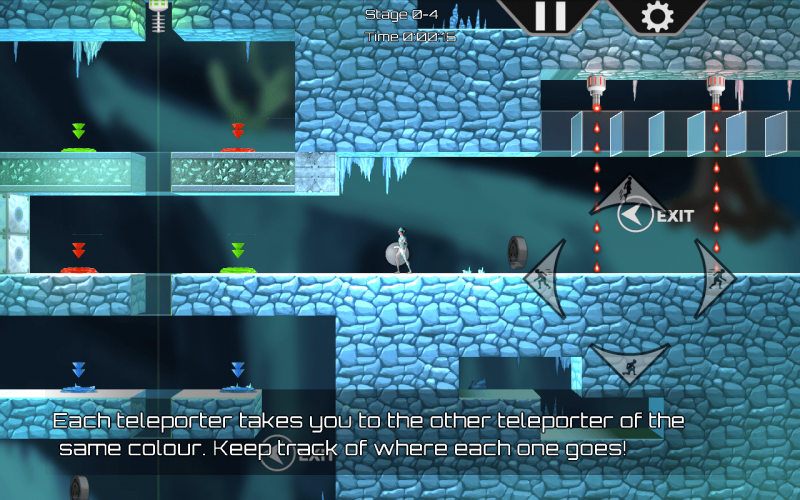 It has been more than a month since Google introduced a new section in the Play store – the Indie Corner. You would think this would give the indies more visibility? No way. The contents of the indie corner has changed ever slightly since then and the section is so short you’d think there is a shortage of independent games. So the gazillion of under-promoted games remains below the visibility line.

PocketMeta likes to bring these little gems to your attention, and this week let it be Antiflux. Coming from a team of indie devs currently looking to get the game greenlit on Steam, Antiflux is a wonderful old school platformer for the patient player.

You control an astronaut landing on a planet, looking for… erm, some lost research, whatever. Your goal is to get the dude, or is it a girl?, wearing a neat steel-blue suit and goggles to the exit. The planet is a hellish contraption of labyrinths and chambers filled with laser shooting robots, barbed wire, teleporting buttons, jumping pads and whatnot.

It’s a 2D third-person view, and needs a larger screen with good specs to run smoothly. Perhaps it’s worth noting the game becomes disorienting at some point, but as far as I am concerned, this is why platformers are there in the first place – to challenge players’ spatial skills and timing, quick problem solving and tolerance to multiple retries. 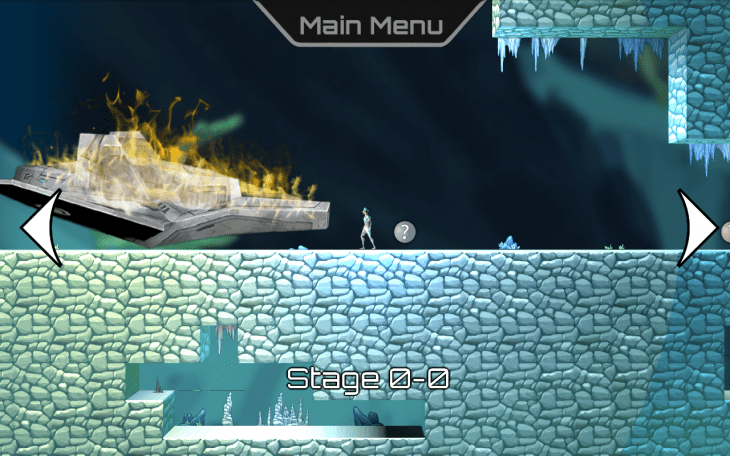 To remedy the disorientation problem the game gives you a Pause button, which does a little more than pausing the game – it lets you drag the level around and see where you are, and where you need to go. Sometimes, your path is a snake wiggling up and down with its long spineless body, so that’s what you will need to memorize.

Provided not only the direction change, but the areas are jam-packed with deadly riddles and puzzles, you would need a lot of checkpoints, right? You have them. They’re not overly frequent, just about enough to save your progress and reward you for the effort, but also urging you to think of a longer tactic regarding each piece of the way. 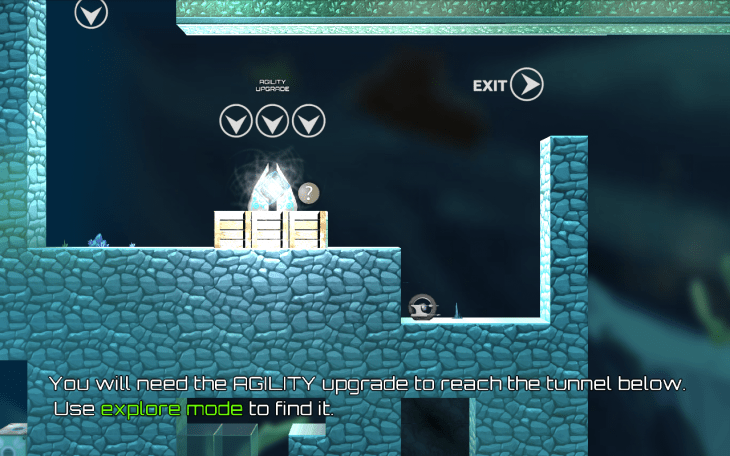 I have read the discussions on Steam, where some users urge the developers to beef up the visuals. I disagree. I love that it’s 2D, and can move in four directions, and I find the environments beautifully rendered, sci-fi and detailed. Of special praise is the soundtrack that just makes the experience perfectly atmospheric and memorable. 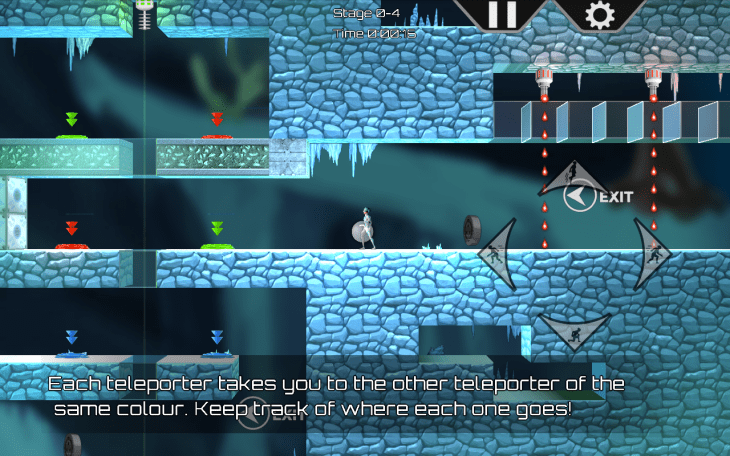 Controls get a little getting used to. At the bottom left there is an invisible joystick you tap, hold and drag to move left and right. On the right, occupying a good deal of the screen real estate, is a four-button control – jump, dash in two directions and crawl. You have the jump and crawl buttons by default, but the other two need to be unlocked in an agility upgrade – it’s a box you need to get to before you finish stage 01. The game supports external game pads. I felt like they were responsive, even though needed a little getting used to, but once you get the hang of how the combinations work together, it’s a smooth ride. 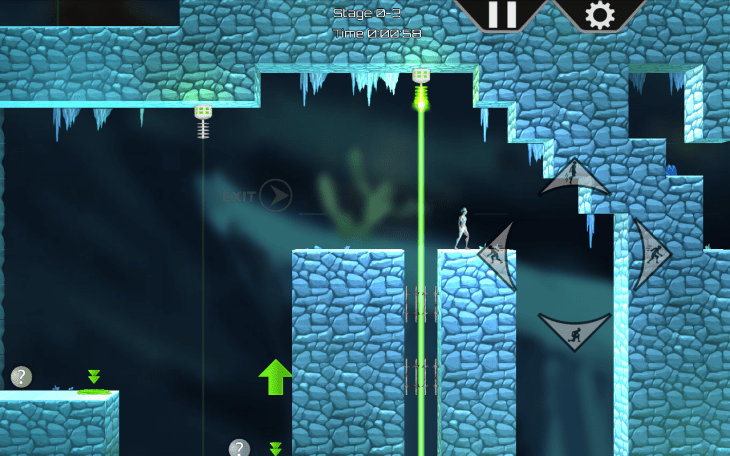 Difficulty-wise, it’s an old school platformer that brings the decent challenge and combines meaningful mechanics with problem solving, the good way. Remember those times when clearing a stage did feel like something you have worked hard to accomplish? Antiflux is that kind of game, at least from the perspective of my skill in platformers. The first few stages are introductory, teaching you what each element is and how to use it. The game introduces them evenly, so you never feel overwhelmed. It’s all quite intuitive, so you can enjoy the challenge. 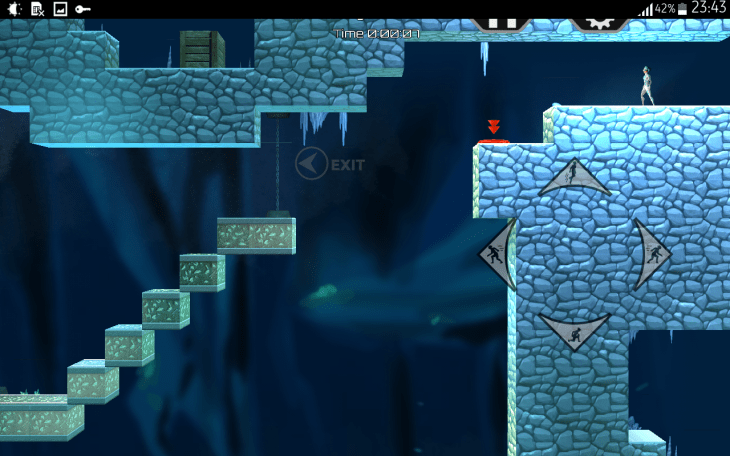 The game is currently on sale for $0.99 on Google Play, no ads, no IAPs, no grinding for loot or some in-game cash. Just you, the guy in the swim suit and the maze.

It’s the performance that needs to be addressed. It crashed several times in my time with it, and once it lost my progress. Good thing I was not too far back then, but I imagine this would have been a painful blow if I were deeper. It also heats my device.

All things considered, Antiflux is a noteworthy platformer for the fans of the genre, appreciating the old-school gameplay that combines neat mechanics and a decent challenge. It may have a few performance hiccups, but judging by the developers’ activity we may assume the fix is in the works. It features 60 well-designed levels of a hellish sci-fi maze, Metroidvania-style permanent upgrades, checkpoints to respawn if you die, and a wonderful atmosphere to it. We recommend it.