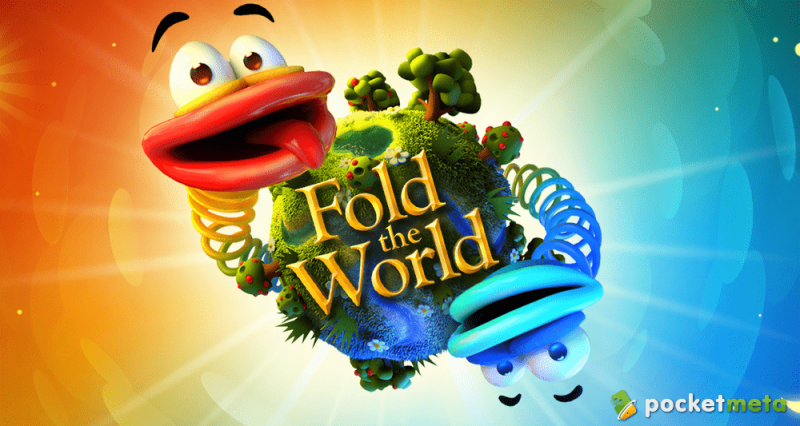 Fold the World is a new puzzle game from TabTale. The game first launched on iOS some 5 months ago, and now Android gamers get a chance to grab it for free on Google Play.

Fold the World might look like it’s a kids game, with its cutesie graphics and fun sound score. However, do not judge a game by its looks alone. At its heart, Fold the World is a hardcore puzzle, valiant, fierce and merciless. It will defy your problem solving skills, logic, spatial skills, and self-control.

The gameplay in Fold the World takes a shape of a pop up book that tasks you to guide a colorful multicolored spiral YoLo from page to page, solving complex puzzles. YoLo can only move along the red line, and since its parts have been scattered all over the pages, you need to fold these pages in order to match the ends of the red line and let YoLo progress.

The initial levels will introduce you to the mechanics, and after a few tries you get the hang of the gameplay. 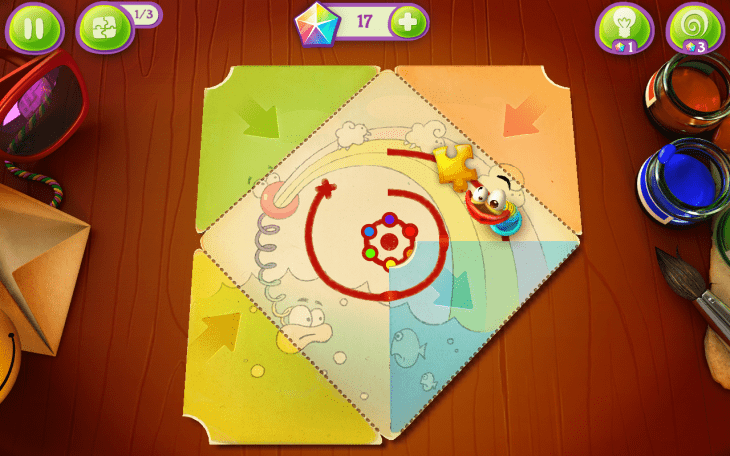 The controls really shine here, as not only are they responsive and smooth, but also very realistic in a way that it feels like you really fold the paper. Sound score and magnificent art work really help amplify the immersion. According to the developer, all levels have been hand-crafted first and then recreated in 3D for the game, so have no doubt all puzzles make sense. Eventually.

While we’re at it, the graphics are outstanding. Even though they’re cutesy and will appeal to the kids first, the more you get into the gameplay the more you appreciate the level of polish that went into crafting this beautiful paper world. It’s an ode to origami, if I am choosing the terms correctly here. Fold the World will undoubtedly join Tengami and Uwe Rosenberg’s Patchwork on my personal list of the most beautiful and high-quality puzzles on mobile for those who also like to craft things with their hands, paper, cloth and a pair of scissors. I do. When nobody’s watching. 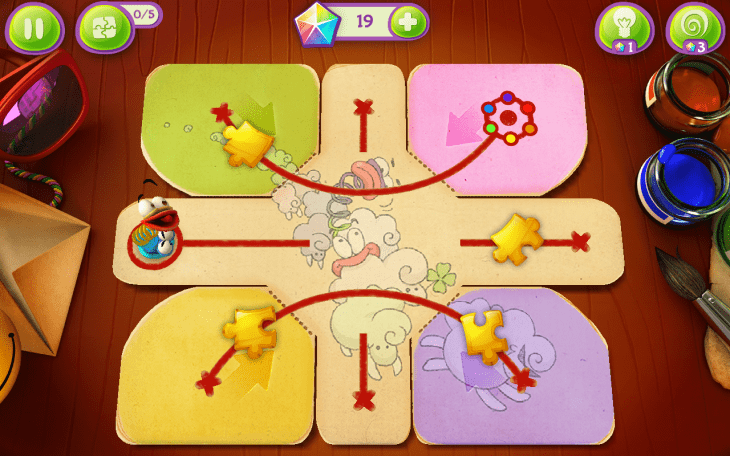 The game does not make it easy to win, and while the initial levels are fun, the more you progress the more you appreciate the hard-earned power-ups. The latter come as hints, which point at where your next fold should be, and teleportation gems that teleport YoLo to the next piece of the puzzle.

The deeper you dig, the more complex puzzles challenge your wits. They will consist of more pieces, involve odd holes through which YoLo will be able to get to the other side of a piece. You will know you’re on the right track when the red line behind YoLo will start disappearing – it means it can not go back. Until then, if the red line remains, you’re poking in the wrong direction. 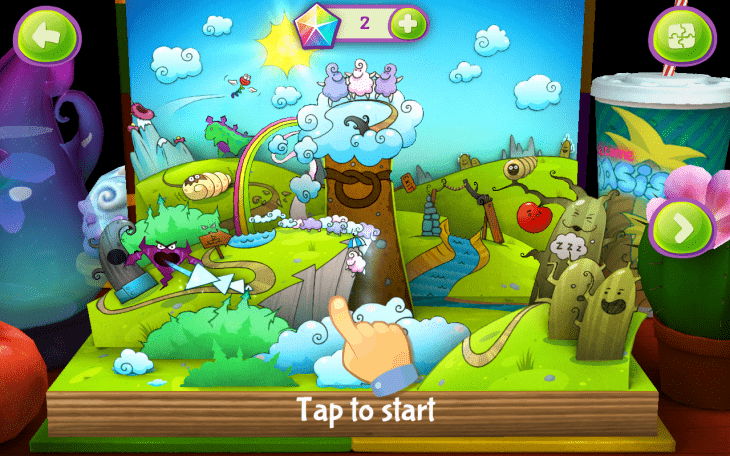 The levels are visually diverse, and at some point you’re digging a forest themed environment, but the next thing you know you have to deal with a night-time environment where magic ink helps you highlight the way.

At some point you get to use bookmarks to help you along the way, then sticky notes, then craft entire origami figurines. Needless to say, it does get mind-bending at times. Do not let the kids play alone if you have some tips and gems in store – they will spend the last of them on easier levels leaving you high and dry against the hard ones.

That said, IAPs let you buy packs of gems for $0.99-$4.99, and you can buy tips, teleportation goodies and unlock new environments, aka chapters. It’s a fair approach, which lets the persistent player play for free. 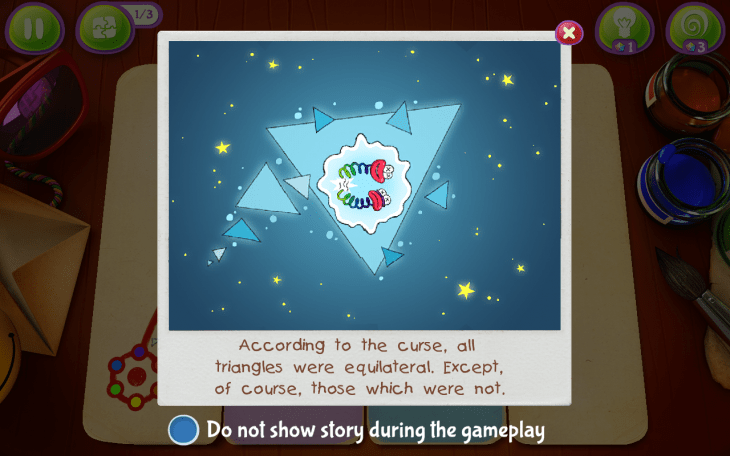 Performance never bugged me, really. I am reading quite a lot of complaints on Google Play regarding loading times and crashes. It is worth noting that the negative reviews are based predominantly off of the performance issue while the rest are highly positive. Since I have not encountered performance bugs, I see no point to chip away from the score, hoping the developers will address the issue for the rest of Android devices. I don’t know if it matters, but I played Fold the World offline, and never experienced overly lengthy loading times or crashes.

My only complaint is the difficulty. Being an average scorer in puzzles, I got disheartened at some point. Buying my way through the puzzles chips away from the sense of accomplishment one gets when solves the puzzles without any help. Needless to say, the younger players I tested this game on gave up even faster. Still, this means the hardcore puzzle fans will appreciate the decent challenge.

Considering the game is free-to-play, players of all ages and skill levels can enjoy parts of it, or the game in its entirety of 60 levels. 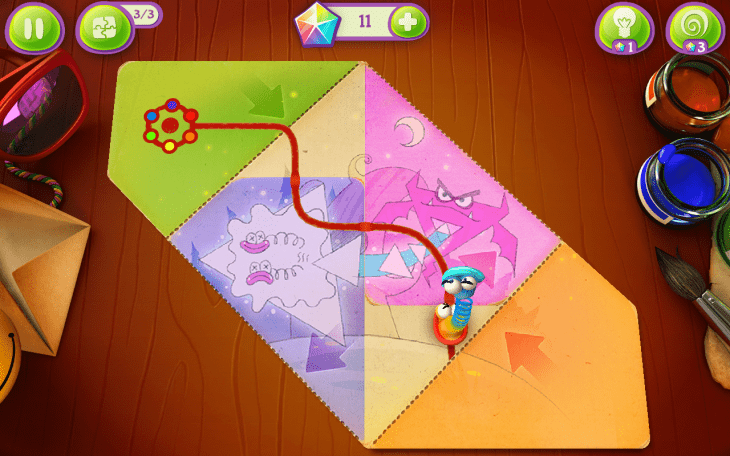 Kids will love the story mode that tells a story of two pals Yo and Lo that got enchanted by some evil wizard and got blended together in a colorful spiral with two heads. It’s a toy most kids have at home, so relating to the heroes and the story is immediate. 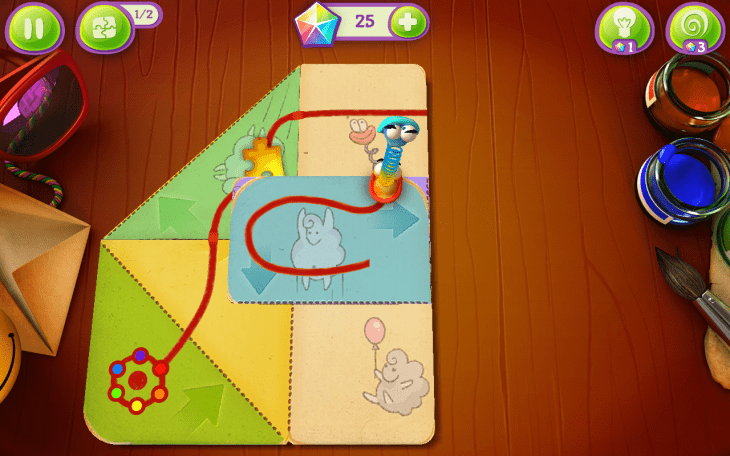 Overall, Fold the World is a beautifully crafted, realistic paper folding puzzle with amazing 3D graphics, if a bit too vanilla cutesy. Its aesthetics might be misleading because its puzzles are unnervingly increasing in difficulty, so the adult puzzle fans should definitely check it out. The controls are a delight, adding a ton to the immersing atmosphere. Android version just launched on Google Play and might have some performance issues, but I am sure the devs are working on a fix. It’s a premium game available for free, so I suggest you grab it if puzzles like Tengami and Uwe Rosenberg’s Patchwork are your cup of tea.