Sci-fi game book aficionados, I have found a treat for you in the debris of Google Play! Actually, Hyper Rift is available for Android and iOS devices, so a wide audience of mobile content consumers will be able to lay their hands and eyes on this new, refreshing and challenging interactive, visually guided game book.

If you have enjoyed Sol Invictus and Heavy Metal Thunder on your mobile; if Ray Bradbury, Stanislaw Lem and Isaac Asimov are not just some vaguely familiar names; if movies like Alien, Resident Evil, Solaris, the Cube, Splice, Dreamcatcher, Prometheus and Interstellar are your cup of tea, by all means check out Hyper Rift.

A good deal of reading, visually appealing design, a UI smooth to navigate, mind-bending puzzles, 14 endings, eerie sound score – all that goodness is available in a free app. What is not to love? 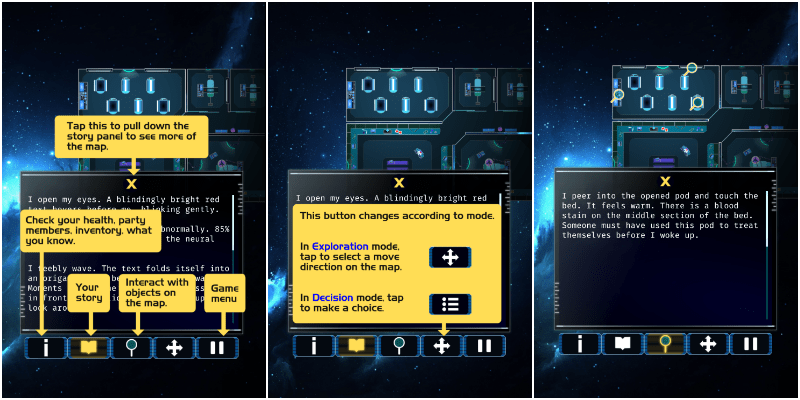 The game is ad-supported, sporting only a single IAP to remove ads. That IAP was added in response to user requests. Thus, you can play all you want, and all the content is available by default without any paywalls. Likewise, no IAP can make your progress faster – there is no way to cheat the game; you will have to use your brain. Are you up for a challenge?

What is in a game book that attracts players if not a good story? Hyper Rift has it. Even though some elements may seem like worn-out cliches, the story overall is original, full of unpredictable twists and turns, and most importantly, mysterious.

You wake up in a med capsule, where neural stimulation procedure has been telling your brain to command your body to regenerate your wounded tissue 380%, or something around that number, faster. You have no memory of who you are, or where you are, and why you are wounded. I know, this technique is as old as the sci-fi literature is, but believe me – unwinding this story is engrossing as hell.

Presumably, you are on a spacecraft named Mi’raj. It is partially dysfunctional, although it seems to be heading somewhere according to an auto-pilot plan. Its technical stuff, the Android robots, are disabled, too, and scattered all over the place. 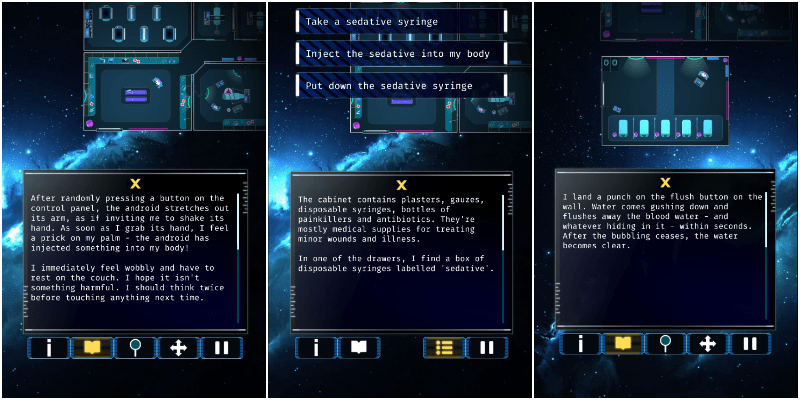 You find the leftovers of a horrible death reap – blood, human tissue, dead or dying people, chimpanzees and alien life forms dissected and left open. Alone, hardly physically stable, ignorant and lost, you begin your tour through the guts of a satanic spaceship. What kind of experiments have they, or we, been executing here? Have we tortured all these people and animals? What are these alien life forms?

Besides death, you will also find something and someone that are still alive. Aliens, presumably hostile, and people, presumably friendly. Who you save, who you leave to die, who you ignore – define how you end the game.

At the same time, noble deeds do not always guarantee a happy ending. As you play, you will collect bits and pieces of information about the ship, its inhabitants, its destination, and what happened to it. Most importantly, you will try to discover what Hyper Rift is and how it affected everything and everyone aboard.

As in all game books, you play by reading. Unlike many game books, however, Hyper Rift is a visually guided adventure book. What it means is you have a map of your current whereabouts on the background at all times. The reading panel can be toggled on or off, depending on what you want to focus on right now. Sometimes, you just need to look around to decide where to move.

So, you read, move around the rooms, explore things you can interact with, or communicate with characters you meet, solve puzzles, and read some more. All those ingredients are well put together, and at no point does the game feel boring. 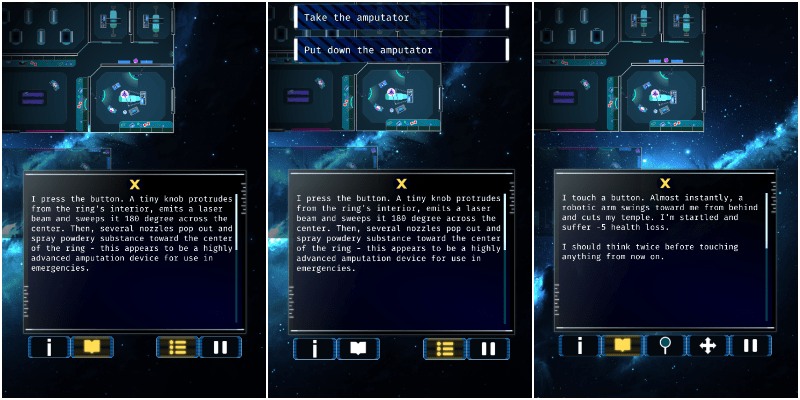 A standalone element of the gameplay in Hyper Rift is the puzzle-based interaction. Say, you may save someone, or recruit a super-smart engineer who can change the course of your progress, but in order to do so, you need to solve a puzzle.

Be prepared for a decent challenge! No dice throwing, no luck factor – pure logic, mathematics, physics, relativity theory and space travel laws like metrics, dynamics, antimatter, colliders and black holes knowledge base will help you. You know, that stuff nerds study in their nerd universities.

On the flip side, relax because the game gives you clues and direct answers. It is just that they are scattered all over the ship, and you may find a puzzle sooner than you find the answers. For example, when I got to the elevator for the first time, I hit the 4th floor, and landed myself a puzzle with a guy named Hoe. He was asking me questions about the said wormholes, antimatter and a few others I fairly understood. Alas, I had no answers because they presumably are on the second floor, on Mi’s monitor.

Other puzzles include memory games, complex math problems (well, they may not seem complex for some, but I did find them challenging). One particular math puzzle with the grappler, where I wanted to save a young man hanging from the ceiling, took me some 20 minutes with a calculator. I know I suck at maths.

Overall, the difficulty of puzzles and their variety is a delight. Yet, they never feel out of place – no boring matching a picture pieces together, or “ancient relics and artifacts.” 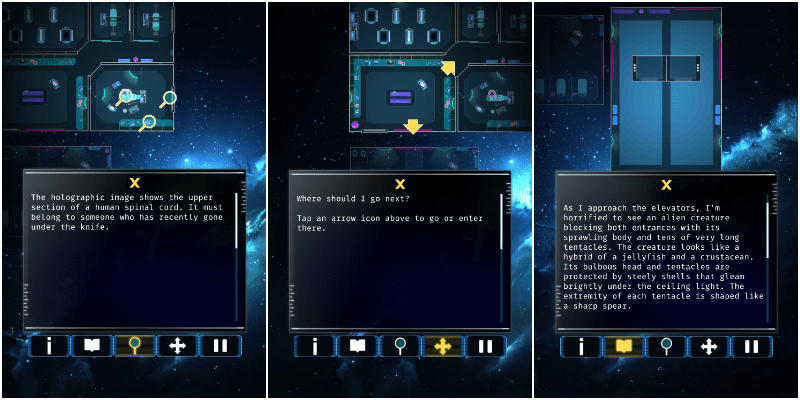 The design is a constant presence in Hyper Rift. As I said, the map of the spacecraft is always on the background and you can always toggle off the reading pane to browse the rooms you have visited. The ones you haven’t become gradually visible as you come near them.

The color scheme, as well as the art work is appealing and sci-fi enough to let your imagination do the job of picturing the insides in more detail. The visual depiction, however, is rather schematic, but I don’t see it as a drawback. Overall, the artwork and sound score is appropriate of the writing and the genre in general.

The game book features 14 endings, and only one save slot. I would like to see at least three save slots, however. That would allow for having at least three game instances, which would potentially let players unlock different endings faster. I also want to see checkpoints you can go back to, if you realize you have screwed up something.

For example, I suspect I might have unwittingly killed a human locked in a vault with the exit to the outer space. Simply because there was no way I could call out who was banging on the door from the other side, and did not quite understand what the options on the control panel meant, I chose to open the outer gate instead of unlocking the vault first. So, I flushed whoever or whatever was behind that door in the vortex of the cold, space void. I would like to be able to go back in time to replay that same episode without having to restart the game over again.

That said, unlocking all 14 endings is an itch you will want to keep scratching until that itch is gone. Of course, if ending A is bad, and the ending B is only marginally better than A, and to get to ending B you need to rescue everyone you meet, the simple human curiosity will keep you coming back for more.

I would like to see cheats and tricks, or walkthroughs from players appear online to avoid walking the same route to ending A over and over again, which might happen. 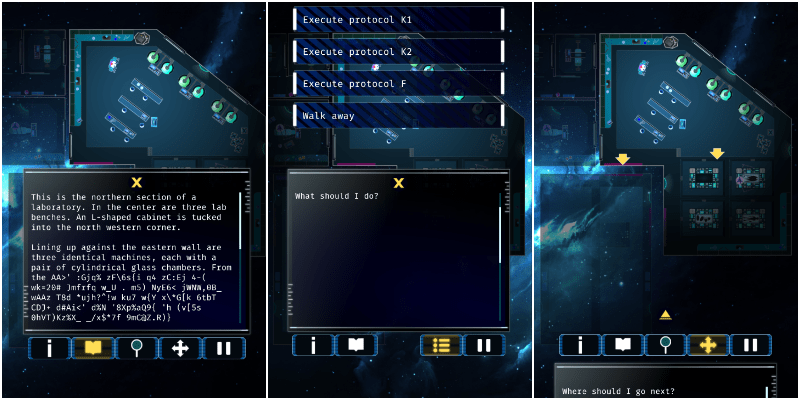 The first time you play, as well as every time you restart, the game displays a brief tutorial, which is more than enough to get the hang of the simple, yet attractive UI.

There are five buttons at the bottom of the panel – the one to see your character stats and inventory; the one to open the book and read about where you are and what you can do; the one to move around – tap it to see yellow arrows; the one to pause the game and see the menu.

Then, there is the one that changes contextually – when you explore, it displays a magnifying glass you tap to see on the map which items you can interact with. When there are items you can either pick, or interact with, like press a button, or solve a puzzle, this button changes to the menu button, from where you open the options of a puzzle, or options to take or leave the object.

If you pause the game, you exit to the menu, which lets you save the game, exit without saving, or reload it.

Note: if you exit without saving, and saving takes two taps on the save button, you lose your current progress. The save button is not overly self-descriptive and the first time I exited the game, thinking it would auto-save, I lost the entire 30 minutes worth progress.

Hyper Rift is a must-have for any sci-fi game book fan. Its engrossing story is filled with subtle nods to some of the most popular sci-fi and futuristic movies while the writing is descriptive, yet easy to digest quickly. The puzzles are no-nonsense, hard science-based challenges, the UI and controls and modern and smooth, and the 14 unique endings provide for an excellent replay value. It may lack a couple of extra save slots to have multiple game instances simultaneously, but a truly gripping sci-fi space horror adventure makes up for a few minor nuances. Offering a great sense of adventure, discovery and an eerie mystery, the story is generous in unpredictable turns. All things considered, Hyper Rift is wonderful.