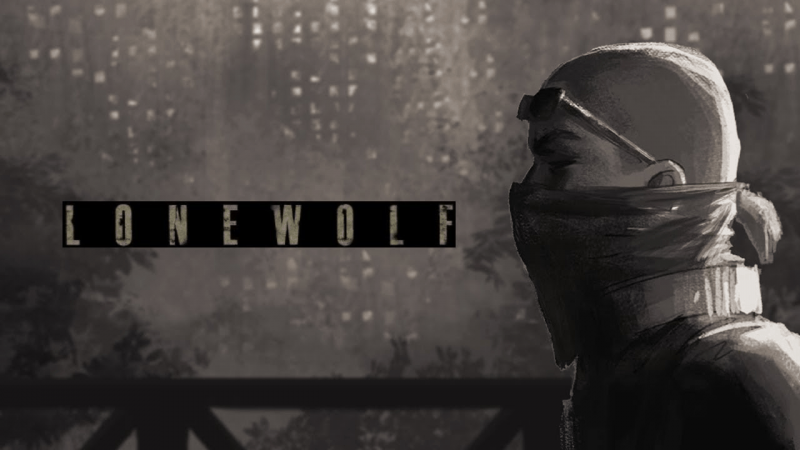 It’s raining sniper games on mobile. From zombies and stickman to Hitman, if you are fan of the FPS you won’t be bored as far as mobile gaming is concerned. It’s a highly populated niche with top developers and indies, as well as a multitude of mediocre generic titles. Not this time.

Lonewolf comes from an indie Simon Hason you should know by Tactical Assassin, and published by FDG, known for Paperama and Tentacle Wars.

Right off the bat let me tell you Lonewolf is a supreme first person sniper game worth a download. Why, I’d recommend an upgrade to premium without hesitation, even though I am not prone to giving that kind of advice. This time I do, first of all because the game is worth it, second of all it would save you some perks of the freemium gameplay. 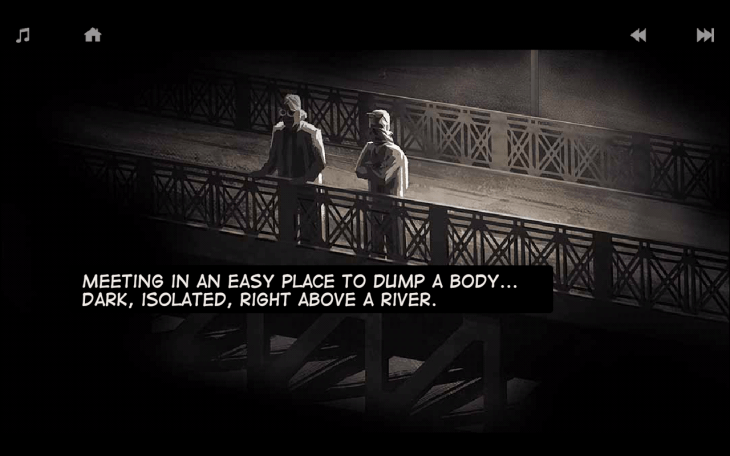 You play as a faceless, nameless sniper, a spec ops veteran with an outstanding reputation of a no-nonsense killer. Money is not your motivation. Some say you kill for the sake of killing, but it’s not that simple. There is a blood-chilling back story to Lonewolf’s determination and patience as he makes his career with a nefarious organization The Assembly.

The characters are a bit stereotypical, yet catchy. The big, bald, ruthless boss Mando with so much blood on his hands hell would shun the likes of him. The dope Midman with a pony tail, wearing sunglasses at night. Lonewolf’s only contact Emile who knows him from the war, and yet he knows nothing about him but the fact the guy is a killing machine. 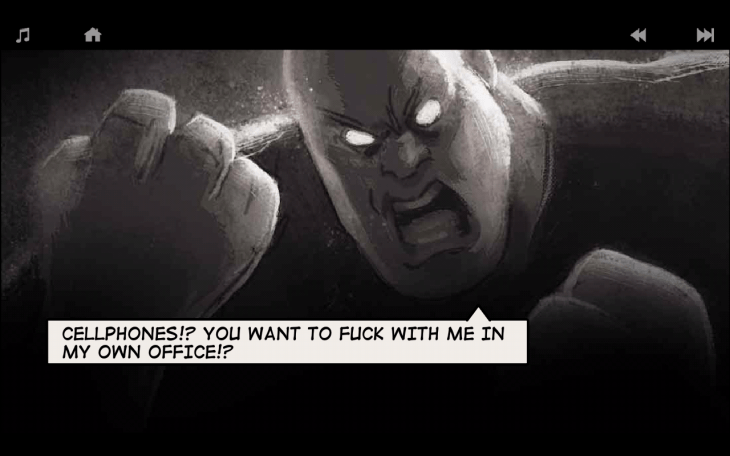 The cut scenes in the neo-noir style add more suspense to the drama, and take the 17+ notice seriously. Kids aren’t supposed to be playing this. The design and the immersing ambient sound score is the second thing I love about this game. Don’t let the hand-drawn 2D gloomy colors of the cut scenes fool you – the gameplay levels are fairly detailed and atmospheric from every perspective. From the sounds of Lonewolf’s breath to how his focus wavers as he calms down his heartbeat and studies the targets – the game is a blast.

Of special value is the writing. Witty, explicit and concise, it preserves the comic book descriptive precision, fitting just enough details into the short bits of text to keep you hooked on the story. 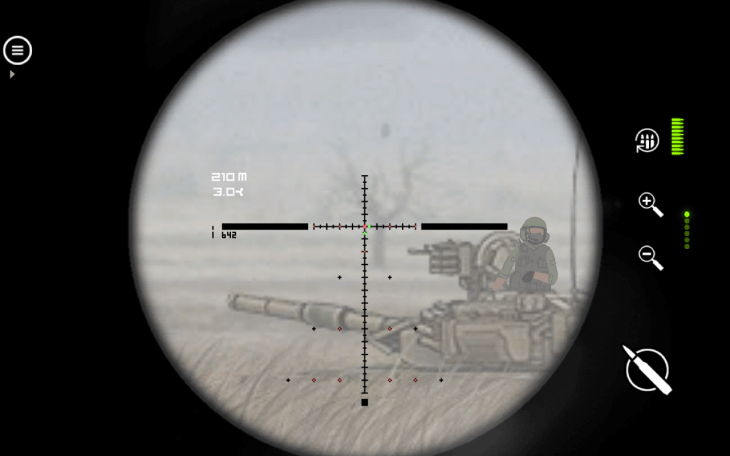 So, you know the game is visually appealing, but how does it play? I dare say it’s one of the best sniper games out there, competing with Hitman Sniper. There is a great variety in the missions, and you never feel like you are doing one and the same thing over again. The beginning missions start out easy to let you get accustomed with the mechanics, and the controls are buttery smooth.

The aim is in the middle of the screen, and you move it with one finger – it’s sensitive. The shoot button is to the right, and you can use your both hands to complete the missions fast. 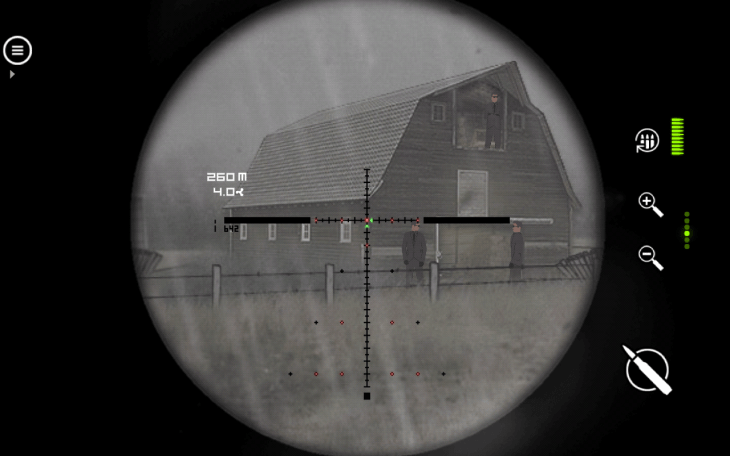 Lonewolf comes with quite a few aces up its sleeve. I am talking unique missions with different mechanics as compared to the rest of the game. Sometimes you will be using your bare hands to take down the enemy in close encounters. Sometimes you won’t have enough room for a rifle, so you will be using your hand gun or a machine gun to take down entire groups of people. Sometimes you need to take down a group of people without alarming the others. Other times you need to kill the crowd and capture the target. So, you have to aim in the non-vital organs. Some missions are dead-hard, and you’d be wrecking your brain begging for cover. 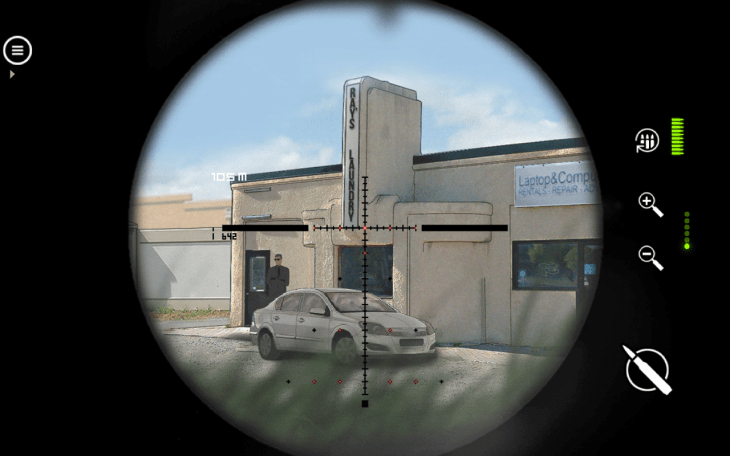 Many missions are puzzle-based, as odd as it sounds. The game encourages you to observe before taking your first shot. Study your target’s moving patterns, analyze which one of the targets needs to be taken down first, and the like. It’s a wonderfully refreshing take on FPS where you don’t just shoot and reload, “close your eyes, and hope for the best,” but think and calculate. The sound and visual effects of shots are spot on. 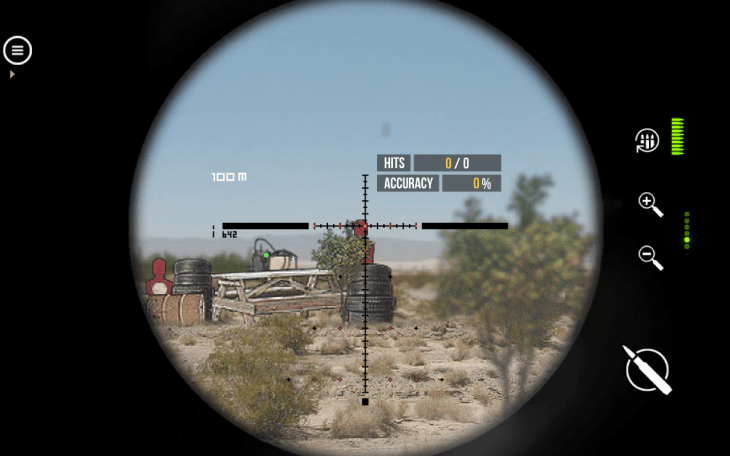 As the story unfolds across the 4 chapters and 30 missions, you will be amazed how engrossing and unique this game is. It took developers two years to make it, so you bet there are some pretty intense story twists and gameplay Easter eggs. Time and time again I find myself playing it nodding “yes, this is how it should be!”

Besides the story missions, you can hone your skills in a variety of mini games that have a smart touch to them, too. Throw balls to shoot them while they fall, or train your speed and range taking down the targets on a training field. Bet money while you train, and lose it if you fail. A lot of thought went into each detail. 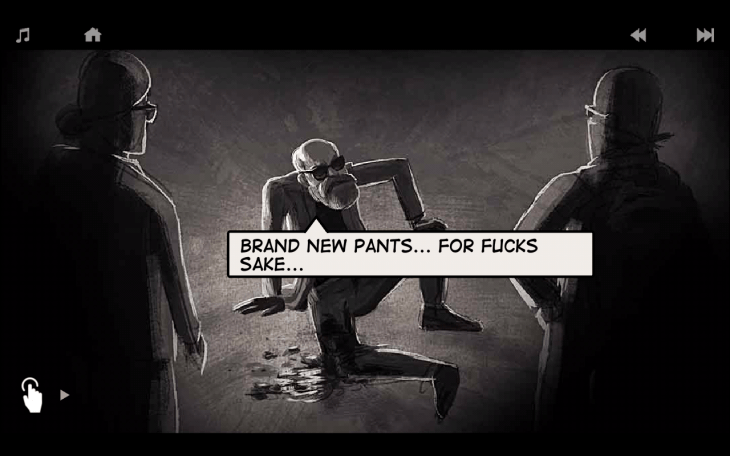 At the end of each completed mission, the player earns in-game cash. Now, this is where the difference between the freemium and premium version comes at play. I would wholeheartedly recommend cashing out $2 to play without the time and bullet restrictions, and ads for that matter. The premium game lets you buy whatever equipment you want from the arsenal, and even though some say it chips away from the progression challenge, I really like to have the best rifle and scope, let alone the wind and distance analyzing gizmo. Don’t know its name because once you buy it you can’t see its stats. This is one little nag I found with the UI. Other than that, the navigation is intuitive. 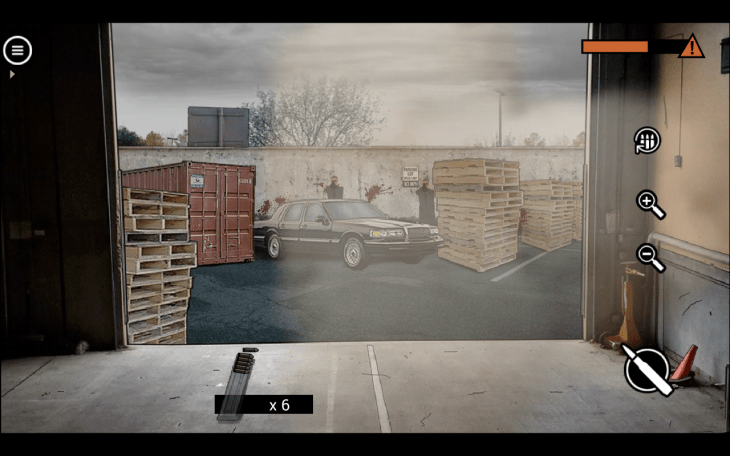 It might be a good idea to try different rifles that might turn out better than the best-est one for the mid-chapters missions.

I have not experienced any performance bugs thus far, and I am mid-way through the game, beginning to suspect the story is about that dish that’s best served cold. One other thing worth pointing out is the 100 MB download that manages to encompass all of the game. It’s playable offline, and there is a lot of things to do with the story missions, mini games and mission replays for better score and achievements. 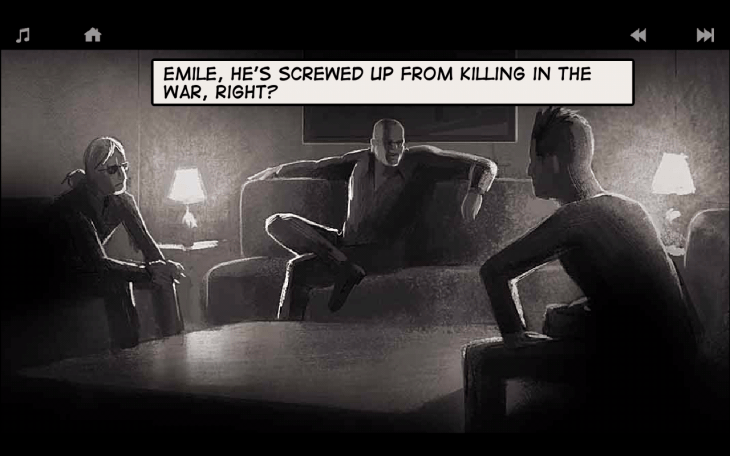 Lonewolf 17+ is a definite success, a bullseye among sniper games so to speak. With an engrossing criminal drama in the background, you get to play through four chapters of intense, varied and challenging missions that will require different techniques and weapons to come through. There is plenty of replay value for the perfectionists and competitive folks chasing the achievements. The neo noir style and ambient sound score complement the witty and concise writing while the controls and performance are buttery smooth. It’s even deeper and has more gameplay variety than Hitman Sniper, if you ask me, with items and areas, targets and mission surprises. Moreover, the missions make sense story-wise, so you never feel like you’re playing a generic title à-la Glu’s Mission Impossible. It’s best played when upgraded to premium, and considering it’s worth $2 for a 2-year worth of indie’s work, we encourage you to upgrade. After all, it’s a very solid and gripping game. Definitely a hit for the sniper games buffs.