No Video
While most popular media players have several codecs installed for watching movies, most users will find there are certain file types that need a special codec that isn't installed by default on their computer.

Advanced Codecs is a collection of codecs aimed to install all the popular codecs on your computer to be able to open any type of media files with any media player. These types of bundles are also called codec packs and most users should have them installed on their PCs.

Advanced Codecs comes with an impressive collection of codecs for all Windows versions, from Windows 7 to Windows 10. If you're still running Windows 7, you'll get all the latest codecs, compatible with your system.

Upon installation, the codec pack also lets you choose what codecs you want to be installed but most users will use the "complete" package when running the codec pack. There's a thing worth mentioning, Advanced Codecs will remove any current installed codecs from your computer to avoid any conflicts that might appear by having different versions of the same codecs installed. If you want to install a codec pack, we always advise installing just one.

The codec pack also comes with a simple interface that lets you configure certain codec options or enable/disable different codecs. If you need a complete codec pack, Advanced Codecs for Windows 7 / 8.1 / 10 is one of the most downloaded and used codecs on the market.

Create thumbnails of your videos with this functional tool
3 / 1,669

A lightweight application that lets you tag various types of videos, and TV shows using cover images and metadata from online sources
13 / 2,066 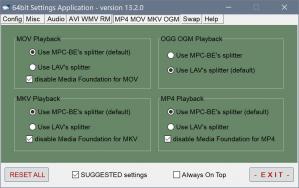 Monkey's Audio 5.38 A fast and powerful audio compressor that doesn’t affect the quality of your music
Latest Articles
10 Best music player apps for Android
How to download images from Instagram
How to permanently delete text messages on your iPhone
6 Best Free Registry Cleaners for Windows
How to transfer your contacts from Android to iOS
Best torrent downloader software
5 Excellent iTunes Alternatives for Windows
4 Best Instagram Repost Apps for Android and iOS