A complete development environment for Fortran developers which includes a debugger

Approximatix Simply Fortran offers a feature-rich development environment for editing, coding, compiling and debugging software written using Fortran. This not be one of the commonly used programming languages these days, but it’s still a standard for creating scientific applications.

This comprehensive development environment offers all the components developers need to create and test projects. At first run, the application displays a list of example you can use to get started, plus the extensive documentation included in the program can guide beginners through all of its features.

Syntax highlighting is supported by the code editor for Fortran but also other programming languages such as C++, Python, Lua and Assembly. There’s an autocomplete function that’s available for both modules and module components which can be used to create more advanced applications.

You can also customize the working environment by changing the text color and font size, and in the left side panel you can perform various searches for modules, project files and command occurrences. When your code is complete you can launch it from the Build menu and using the debugger you can add breakpoints and monitor specific expressions while the program is running.

In the Toolbox you’ll find a set of external tools that are needed for development. To add it to the menu, all you have to do is enter the executable and command line parameters.

Check and package your applications’ codes with this open-source utility
17 / 2,319

Write code in the BBC BASIC programming language on your computer
4 / 1,094

The Linux package for the popular PHP programming language
9 / 2,378

A software environment for statistical computing and graphics.
17 / 4,020

A handy application, that helps developers to create and debug mobile and web apps
15 / 2,996 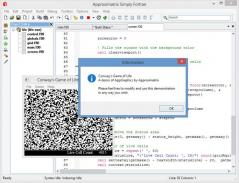