CudaLister is a Total Commander plugin that allows you to change the appearance and functionality of Total Commander’s Lister, including opening source code files in an advanced viewer.

The application relies on the CudaText editor to offer a powerful source code and document viewer.

Once you add it to Total Commander, CudaLister will add line numbering, syntax highlighting, and text wrapping to Lister. This will make TC’s source code viewer easier to use and more practical for developers.

The plugin supports all popular programming languages, including C and C++, SQL, Java, HTML, Bash, PHP, JSON, Delphi, Assembly, and LUA among others.

CudaLister opens all documents in read-only mode by default, although it’s also possible to edit their contents, as well as print them.

An advanced tool that lets you synchronize files and folders
7 / 1,348

Allows you to manage the Start up items on all of your Windows systems
48 / 5,180

Get comprehensive information about space and file distribution on your hard disk drive
15 / 1,515

Helps users view all file extensions found on their system, while allowing them to add new file types or edit the existing ones, and create context menu entries
17 / 2,507 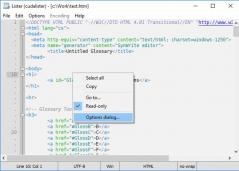 Latest Articles
How to connect a console game controller to a PC (Windows and Mac)
How to Effectively Free Up Storage Space for Android Phones
How to block people from adding you to WhatsApp Groups on iPhone and Android
What is the best archiver for Windows?
How can you change your Twitch username
How to use Google translate offline on PC
The Best Computer Temperature Monitor Apps
Best sites to download free music