ImBatch is a simple application that can help you edit individual or multiple images by applying several changes at the same time.

Besides editing options, ImBatch also offers the ability to convert photos to various formats and despite its robust set of features, the program’s interface is very easy to work with. You can upload files into the app by simply dragging and dropping them into the app’s main window or via the provided browser.

Also, you can batch process large sets of photos with ImBatch, which can save a lot of time that would be otherwise spent editing them one by one. A great feature offered by the app is a smart system that lets you configure multiple tasks and run them at the same time. To simplify things even further, you can save your tasks to a file and re-use them later.

There’s also the possibility to delete selected images, preview them, auto-refresh the current photo and zoom in and out. Among the numerous editing options offered by ImBatch, the tool lets you tweak brightness, saturation, contrast, hue, RBG values and lightness, convert to grayscale, use white balance options, and apply effects and frames among others.

A powerful photo editor that comes equipped with support for a wide variety of file types
25 / 2,310

A feature-rich, friendly application that lets you easily create and edit the appearance of comics and manga drawings
25 / 3,673

Handy application that allows users to freely draw on the desktop.
0 / 472

A comprehensive set of powerful and easy-to-use video editing tools
32 / 4,164 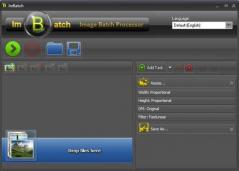 paint.net 4.3.10 A feature-rich image and photo editing application
Latest Articles
How to See FPS in Windows 10 Games Using Your PC’s Built-in FPS Counter
How to Save and Download Workouts on Apple Fitness+
3 Quick Ways to View and Edit Apple Notes on iPhone using Windows PC
How to Record a WhatsApp Call on Android and IOS
How to Blur Pictures Using PowerPoint
How to Send SMS Messages Using Windows 10
How to Use Google Lens for Solving Math Problems
How to Free Up RAM on your Windows PC