No Video
KillProcess can terminate almost any process on a computer, including any service and process running in the system. Even protected Microsoft system processes can be terminated. All of this can be done in the matter of milliseconds. The speed that KillProcess can kill your applications is determined by your computer speed and is not restricted by any other settings within the OS itself.

KillProcess is way more powerful than the Task Manager in other terms than speed. It can kill multiple processes, either by multi-select or by clever use of kill lists. Using these techniques it is possible to batch terminate processes, quickly and swiftly, with a click of a button.

KillProcess can also scan the running processes on the computer, and kill them on sight, much like an anti-spyware application would. In KillProcess however, you are in charge of which applications should be allowed to run or not a and that applies to the computer as long as you say so.

To determine what processes should be allowed to run or not, powerful process information can be retrieved from each of the processes that are running in the system. This makes it much easier to figure out which processes belong to a specific application, for instance identifying all of the processes and services belonging to Lotus Notes.

All of this can make life a lot easier for many system administrators and software developers out there, that constantly keep terminating the same processes over and over again. It is also useful for ordinary people because it makes it possible to terminate services that normally run automatically on their computers, whenever their administrator wants it to, and not when they want it to.

View and open your favorite applications from a smartphone-like interface
12 / 1,135 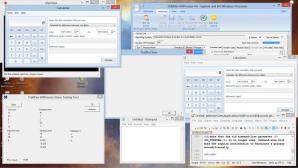