Microsoft Word is a document processing application developed by Microsoft and launched in 1983. Needless to say, MS Word is probably the most popular word processing software on the market, being used by millions of people and companies worldwide.

The software comes with a modern UI, which suffered a lot of changes over the years and emphasizes ease of use and accessibility. For basic word processing jobs and document creation, MS Word is pretty easy to learn. If you want to get more deeper into its features and capabilities, the software has a learning curve. However, for the average home user, it's pretty practical and easy.

Microsoft Word allows you to edit and create documents with ease, as well as share them or collaborate with different people on the same project. As with any powerful editor, Word lets you organize paragraphs, add various elements and media, stylize the documents, add tables, diagrams, charts, or various shapes, to name a few. Being a widely used application with emphasis on collaborative work, Word lets you add various restrictions to documents, including a Read-Only mode.

Besides the features mentioned earlier, the application comes with all the professional features you'd think, allowing you to create a professional structure to your documents which can also include a table of contents section, add citations, footnotes, captions or indexes. MS Word comes with a built-in spell checker as well, adding a read-proof layer to your document.

In conclusion, Microsoft Word is a very powerful feature-rich word processor, which suffered countless modifications and was added a sleuth of features and options that keep it at the top as being one of the best applications for office use. While it can be downloaded and used as standalone software, Word is found bundled in the popular Microsoft Office suite.

Efficient software for looking for misconfigurations in the Microsoft Office pack.
4 / 996

An intuitive, easy to use application for contact information management
25 / 2,935

Reliable application that will allow users to modify PDF files and even automate the process in order to save time.
2 / 404

Organize your dictionaries and terminology lists effectively and efficiently with this comprehensive and full-featured application
3 / 1,979 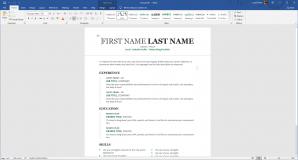