Open Hardware Monitor is a simple yet powerful application that lets you monitor various hardware sensors such as temperatures, fan speeds, voltages, or clock speeds.

The software boasts a simple and accessible interface resembling other similar applications such as HWMonitor. You can monitor in real-time your core voltages, CPU temperatures and fan speed, motherboard vcore and temps, as well as video card temperatures, clock speeds, and voltages, or your mounted hard drives.

For each individual piece of hardware, you can see the current values as well as the maximum reached values, which is an important feature if you're stress-testing your PC after an overclock.

What's, even more, better is that Open Hardware Monitor lets you export your reports to disk, to store and compare them at a later time. As the name implies, Open Hardware Monitor is an open-source application that gets a lot of updates and support from its growing community. The application also fixes various incompatibilities with different pieces of hardware as well as constantly adding all the new CPUs, GPUs, or motherboards to their database.

If you're an overclocker or you just want to have a software handy to monitor your PC at any given time, Open Hardware Monitor is an excellent application that does an excellent job and has a low memory footprint.

A benchmarking tool that allows monitoring and capability assessment of the GPU, also providing tests to check if your computer's hardware configuration is VR ready
17 / 2,335

Monitor your CPU temperature with threshold shutdown for protection
4 / 14,039 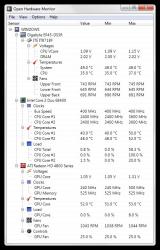