Win7codecs is a complete and functional collection of codecs for Windows 7 OS with no additional adjustments required to work.

The Win7codecs installer will remove automatically most other popular codec packs from your computer prior installing its own set of codecs. As soon as the install process is done you will be able to play your media content immediately and all your files will be recognized by Windows Media Player and Windows Media Center.

The program does not have a built-in media player and does not perform any file associations. The contents of Win7codecs allows you to use any media player and the only limitations result from the player’s own capabilities.

Win7codecs enables support for video streaming in various formats using all the popular web browsers. You can choose what features to install and where to install them or remove any of them individually at a later time.

A powerful open source video editor with custom filters and support for a large number of formats
17 / 1,815

Extracts information from one or more MKV containers in batch mode, including video and audio streams, tags, subtitles, cues, and timecodes
149 / 3,136 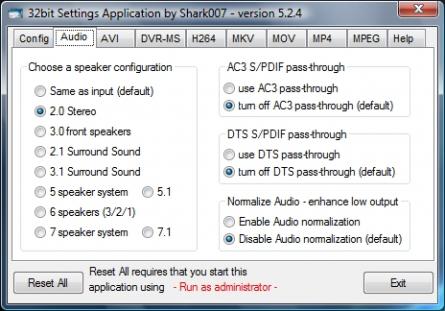 Monkey's Audio 5.56 A fast and powerful audio compressor that doesn’t affect the quality of your music

K-Lite Codec Pack Mega 15.8.0 Codecs, DirectShow filters and tools
Latest Articles
How to Download Videos from Twitter
How to Reduce Steam’s RAM Usage from 400 to 60 MB
How to Watch Netflix Videos Offline
How to Blur Pictures Using PowerPoint
How to Optimize Windows 10 For Gaming
5 Useful Search Engines for Social Networks
How to Get a Cheap (or Free) Windows 10 License
Top 5 Best DNS Servers for 2020