Flashing lasers, dashing enemies, head-spinning action – Super Arc Light does a good job at making you dizzy. If you enjoyed Super Hexagon and Geometry Wars, this little game here might make it to your favorite time killers list. 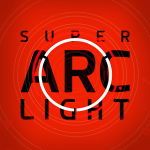 Are you good at twitch games? Are you fast enough to predict the geometry layout and trajectory for spinning object that fires at a 90 degrees angle? I am not. I wonder who is. Certainly not me. Oh why?!

This game is so fun and looks exactly down my alley, yet I find myself constantly weeping and jerking my knees because I die, and I die. Here is how it goes.

You control a firing tiny sphere, attached to a spinning circle. The circle is spinning so fast it’s literally dizzying, or it’s me getting old. Tap and hold, and the circle starts shooting and slows down its dash. Release your hold and it spins frantically again, but in the opposite direction.

The control system is a one-touch based one, you play it in portrait mode. It’s simple to get the hang of, yet excruciatingly difficult to master. The frantic spinning, unforgiving change of direction each time you take your finger off the screen makes things rather chaotic and take away the precision from the shooting. I find myself incapable of predicting, planning and deploying any resemblance of a tactic. I am just helplessly spinning and frantically tapping in hopes this time I make it farther. At the same time, the game is responsive and plays smooth.

Inside your circle is a series of circles, like a vortex of circles. The incoming enemies also move along the circular orbits around your little hero. Once at least one enemy enters the center, it’s game over.

Every now and then you will see the hexagonal neon thingies – these are weapon power-ups. They do add some fire power to your standard weapon, and most of all, the power-up weapons add more visual blast to the scene. 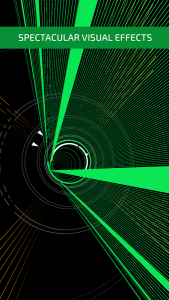 However, the power-ups last only a tiny fraction of that gameplay, and I was saddened to find out they are nowhere in my inventory, nor is there any inventory. They’re just that – consumable power-ups. I see it as a painful letdown because it takes away a good deal of replay value, the motivation to keep playing for more powerful weapons you would be able to use when you need them instead of random appearances you need to take down first to be able to use.

The visuals are simplistic, yet impressive. I am missing a few glowing shades, though, and perhaps more Geometry Wars-style glam, which would make it look less like neon circles and dots. The music is rhythmic and pumping, and I find it rather addicting. 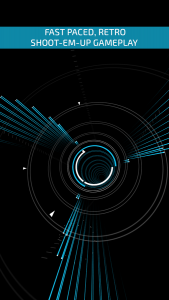 Super Arc Light is an addicting, perfectly snackable twitch time killer you will love playing on the go, whenever you have a few minutes to spare. It’s not something you won’t be able to quit at the moment’s notice when your boss is around. At the same time, its one-handed control system and the possibility to play offline make it a great lunch-time blast to your eyes’ retina. Yes, it does keep playing in your head as you close your eyes.

The re-plays need a little tweaking to make it faster to start over again when you die because in this game you die a lot, and the re-play button is just a little farther than I want it. And I want it instantly. Other than that, I have no complaints. You just got to be good at twitch game to appreciate the difficulty, speed, and the head-spinning action.

Addicting, fast-paced gameplay
Good replay value
Perfect for short sessions on the go
Playable offline
Minimalist visuals
Catchy soundtrack
Impressive scenes when you fire with power-ups
Dizzying radial shoot-em-up for the fans of the retro style in visuals
One-touch controls are easy to get the hang og, yet very difficult to master
Lots of achievements

The power-ups are one-time consumables, which chips away from the feeling of progression
Perhaps the retro style in design does not do the game’s visuals justice. It feels like it needs a visual upgrade

All things considered, Super Arc Light is an addicting, fast and hard twitch game for the fans of the genre. I personally would want to have the weapon power-ups unlocked and added to my inventory, so I can use them for short bursts of power the moment I need them, as opposed to the current consumables that drop randomly and require precision to shoot the weapon box, which often gets me killed. The visuals are Tron-like minimalist, and I would want to see a little more mysteriousness and neon shades to them. The gameplay, however, is fun. Try it, it’s $0.99 at launch.

Disclaimer: the developer provided PocketMeta with a promo code for the game. The review was not sponsored in any way.