Even though Microsoft doesn't support Windows XP anymore, there are still plenty of people who use it because they became so accustomed to its features. The good news is, there are third-party apps designed to bring functions from the old XP to newer Windows versions. For instance, Spencer is a free piece of software that brings the Windows XP Start Menu to Windows 8 and 10.

It's worth noting the program is portable so there is no setup required and it was designed to function along the existing Start menu in both Windows 8 and 10 as it works as a pinned app.

The menu provided by Spencer provides quick access to frequently visited locations and tools in Windows such as Accessories, Event Viewer, Services, Task Scheduler, Defragmenter, iSCSI Initiator, Resource Monitor, and System Information among others. Furthermore, the menu allows you to access the Command Prompt, Control Panel, Run function, and the power options in the Shutdown menu.

Visually, the Start Menu offered by Spencer is very similar to the XP one, and as you can see it packs numerous useful shortcuts which XP fans will appreciate.

A simple tool that lets you access files fast by writing their paths in a search bar and by creating shortcuts
10 / 1,056

Handy program for everyone that wants to improve their Windows boot time.
10 / 680 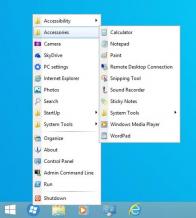