A useful toolkit designed as an alternative to the Windows’ command line editor.

A useful toolkit designed as an alternative to the Windows’ command line editor.

Take Command is a comprehensive toolkit that was created to replace the Windows command line editor, including various programmer-specific features but also options for regular users. If you’ve ever used command line you know the Windows default feature has its limitations which can be overcome by using a third-party tool.

These applications are created on top of CMD with added enhancements or as standalone tools with a unique approach to command line editing. Take Command takes features from both categories as it included multiple components – some based on Windows’ CMD, while others are specific to the program.

Take Command packs three main models: a development environment where you can run several console apps simultaneously in different tabs, the console – an improved version of CMD, and the language component – based on CMD as well, but optimized for scripting.

The professional looking interface has all the functions grouped in easy to navigate menus. In the console you can perform operations like copy, delete and move which are not available in CMD.

Some of the most important commands available in the application include the possibility to edit commands script in the built-in editor that has support for syntax highlighting, a test and binary file viewer, a debugging engine with conditional break points and a scroll back buffer that lets you review the output from previous commands. There are also several features designed for programmers like support for DO loops and SWITCH statements.

Useful program that allows users to customize the appearance of their folders.
1 / 352

One of the best application for boosting the productivity by offering an efficient way to manage Redis databases.
7 / 1,755

Great program for users that own HyperX products to customize them the way they want.
2 / 432

Open games and other programs that only run in full screen in a custom window mode
33 / 3,992

Great software for users that want to quickly create slideshows.
8 / 611 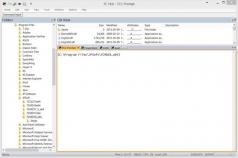